Back in November 2017 Patently Apple posted a report titled "U.S. Court of Appeals dismisses a Lawsuit brought against Apple by Rembrandt Patent Innovations over iTunes Functionality." The patent troll is back to sue Apple on another front regarding Bluetooth with EDR. The patents used to sue Apple with are the very same ones that beat Samsung in court, even though Samsung was able to get the penalty reduced from $15.7 million to $11.1 million.

In their formal complaint against Apple they make it clear that "The patents accused of infringement in this lawsuit, US Patent Nos. 8,457,228 and 8,023,580, were previously asserted in this District against Samsung Electronics Co., Ltd., Samsung Electronics America, Inc. and Samsung Telecommunications America, LLC. As part of that lawsuit, this Court construed the meaning of certain terms and phrases from those patents, and ultimately conducted a jury trial, during which both of those patents were found to be valid and infringed. After extensively reviewing the post-trial motions, this Court denied Samsung’s motions for judgment as a matter of law, and its request for a new trial, and entered Judgment in favor of the patent owner, Rembrandt.

Later in their complaint Rembrandt notes that " Upon information and belief, Apple has infringed directly and indirectly and continues to infringe directly and indirectly claim 21 of the ‘228 Patent. The infringing acts include, but are not limited to, the manufacture, use, sale, importation, exportation, and/or offer for sale of products practicing any of the following Bluetooth specifications that support Enhanced Data Rate (“EDR”): Version 2.0 + EDR, Version 2.1 + EDR, Version 3.0 + HS, Version 4.0 + LE, Version 4.1, Version 4.2, or version 5 (collectively, the “Bluetooth EDR Specifications”). 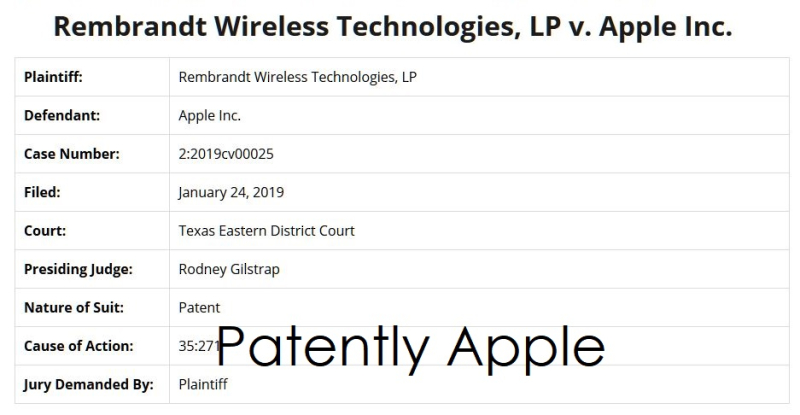