Today the US Patent & Trademark Office published Apple's third patent application within the last year that relates to a next generation Virtual keyboard used in a future MacBook model. The other two were filed in the first half of 2018 (01 & 02). Apple has been working on such a keyboard since 2006. Today's patent filing emphasizes the ability to provide a next generation of glass that could be slightly deformed to present a key-like visual and experience as opposed to today's solid glass virtual keyboards that provide no give on the keys. The secondary display beneath the glass cover used for the virtual keyboard can be used for other purposes like games, music controls or pen input.

In an overview of Apple's latest invention, they review what keyboards offer today. Apple notes that many electronic devices include keyboards to facilitate user input. Conventional keyboards include movable keys that are actuated by a user striking them with their fingers or another object.

The surface of the touchscreen may be flat and featureless, and may thus occupy less space than a mechanical keyboard but may require users to identify the location of the keys by sight rather than by feel.

Apple's invention is generally directed to a keyboard that includes a glass member that defines an input surface of the keyboard. In particular, a user may touch or apply a force (e.g., push or strike) or otherwise contact the glass member directly to provide inputs to the keyboard.

The glass member, also referred to as a glass cover, may be formed from a thin glass sheet that is flexible enough to deform locally in response to applications of force. For example, the glass sheet may be a strengthened glass having a thickness of about 40 microns or less. Due to the thinness and flexibility of the glass, when a typical typing force is applied to the thin glass sheet (e.g., via a finger), the glass may be primarily deformed directly under the force (e.g., under the finger) while other areas of the glass sheet remain substantially undeformed or less deformed.

Apple's patent FIG. 7A below shows the first glass layer may be formed from a strengthened glass having a thickness less than about 40 .mu.m, and each protrusion may be configured to buckle or collapse in response to application of a force to produce a first tactile click; FIG. 17A shows the key region #1702 may include a glyph #1704, which may indicate the function of the key region. The light from the underlying second display lights the letters of the glass formed keyboard. 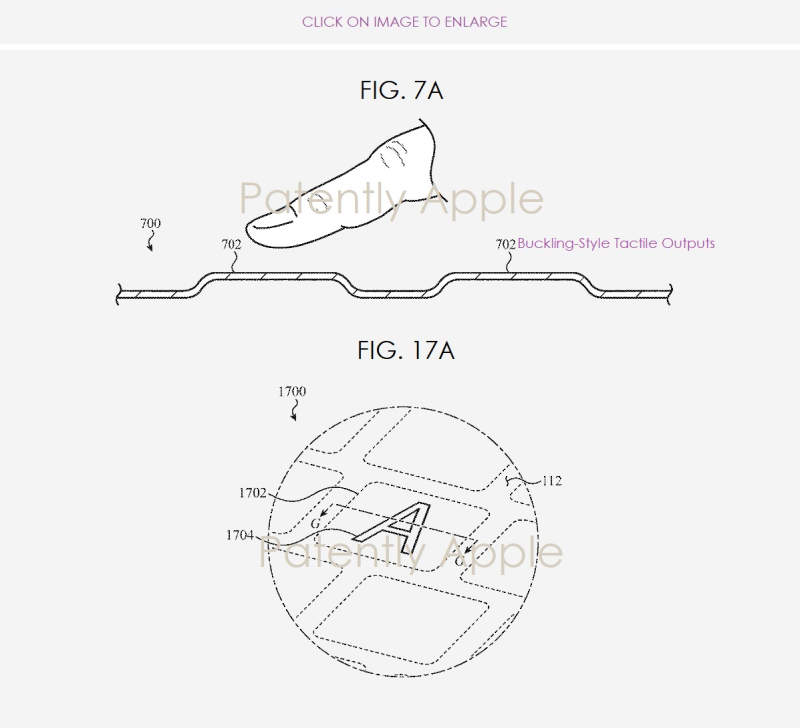 Moreover, a user may be able to type faster and with fewer errors because they can feel the borders and boundaries of each key region and do not need to look at the keyboard to align their fingers with the keys. The ability to feel distinct key regions may also help prevent a user's hands from unintentionally drifting out of position during typing.

Further, due to the flexibility of the thin glass cover, the raised key regions may be configured to deform in response to typing inputs. Such deformations may provide a similar tactile feeling to conventional movable-key keyboards.

Further, the raised key regions may be configured to provide various types of tactile responses. For example, the key regions may be configured to have a shape that buckles, provides a buckling response, or otherwise produces a perceptible tactile output (e.g., a click or snap) when pressed. As used herein, "buckling," "buckling response," and "buckling force" may refer to a force response of a key region or input region characterized by a gradual increase in an opposing force as a key region or input region is pressed, followed by a sudden or pronounced decrease in the opposing force.

The decrease in the opposing force results in the familiar "click" feeling and, optionally, sound. An example force versus deflection curve illustrating a buckling response is described herein with respect to FIG. 6C. As another example, the key regions may be configured not to buckle or have a distinctive force peak, thus providing a more continuous force feedback during typing.

Apple states that other features and benefits are also made possible by a glass cover for a keyboard as described herein. For example, because the glass may be transparent, a display may be placed under the glass cover. The display may allow the keyboard, as well as any other region of the glass cover, to act as a display in addition to an input device.

The display may allow the computer to display different keyboard layouts, keyboard alphabets, keyboard colors, or otherwise change the appearance of the keyboard by displaying different images through the transparent glass.

Another advantage is that the glass sheet may also present a surface that may be free from openings, which may help protect internal components from contaminants and spills. 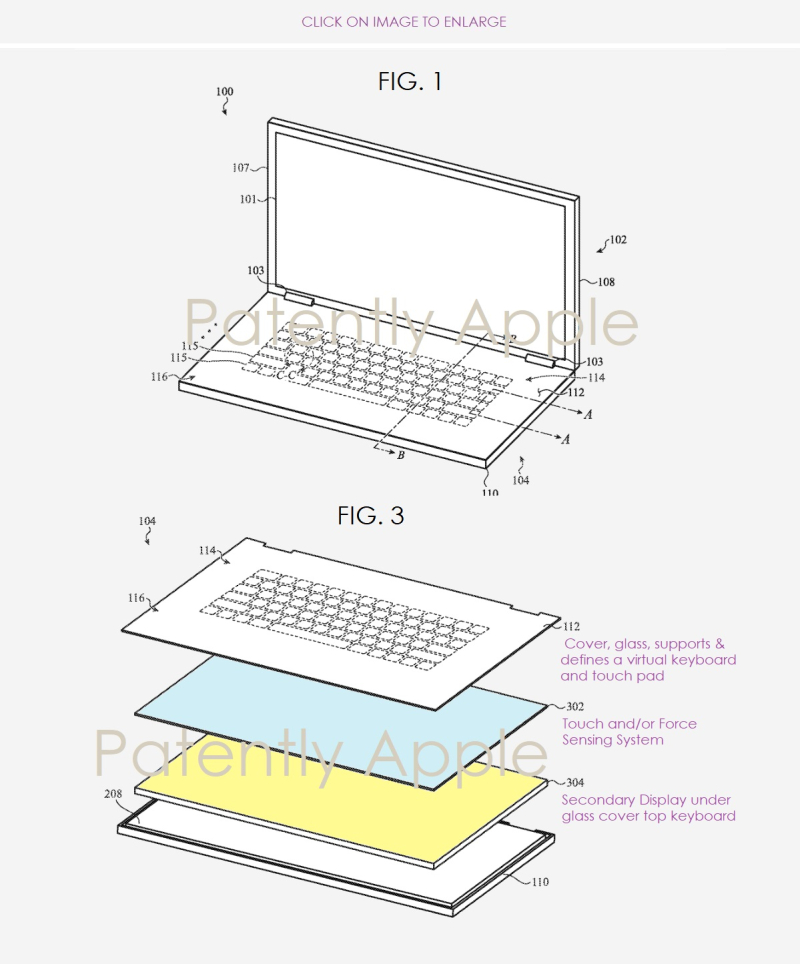 The base portion may also include an optional display (#304) below the touch and/or force sensing system (#302). The display may be used to produce images on different regions of the top case, such as the keyboard region, a touch-input region or the like.

For example, the display may produce images of characters, glyphs, symbols, keycaps, or other images that are visible through the top case and that are optionally aligned with individual key regions.

Because the display can dynamically change what is displayed, different images may be displayed at different times, allowing the device to display different keyboard layouts, different key glyphs, and the like.