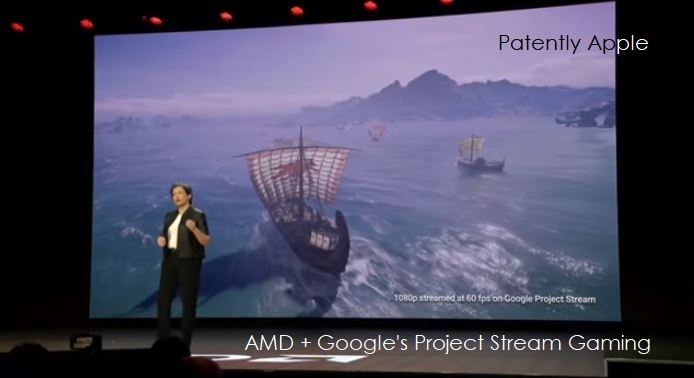 In early December 2018 Patently Apple posted a report titled "Apple's Future 5G Service Bundles could include Movies, TV, Gaming and Music in Order to take on Netflix's Dominance." Then during AMD's first keynote ever at CES, they announced that they were partnering with Google's upcoming game streaming service known as 'Project Stream,' coming to the U.S. this year.

As 5G comes to market, Android smartphones will be first to tap into high-end 5G services like live gaming at 1080p at 60fps. Our cover graphic reflects that announcement at CES. In our report we mentioned that with Apple's iTunes coming to Samsung TV in mid 2019, it was possible to envision Apple adding a gaming service to their upcoming streaming content service.

Today Cheddar, a startup internet TV company, is reporting that Apple has been in talks with gaming companies about a subscription service for games. The service would function like Netflix for games, allowing users who pay a subscription fee to access a bundled list of titles. Apple began privately discussing a subscription service with game developers in the second half of 2018, said the people, all of whom requested anonymity to discuss unannounced plans.

Gene Munster, a longtime Apple analyst and investing partner at Loup Ventures, told Cheddar that "It’s a big enough market to move the needle for Apple."

The report later noted that "If Apple functioned like a publisher for games it sold through a subscription, it could entice developers to create exclusive games for the service by undercutting the fees they would normally pay to an outside firm for user acquisition, marketing, and other distribution-related costs. Apple currently takes a 30-percent cut of App Store purchases but lowers that fee to 15 percent after the first year of a subscription."

The gaming rental business basically died when Netflix acquired Blockbuster. No one has really filled that huge gap in the market. I used to rent 2 or 3 titles a month. If I liked the game I'd keep it at a 3 day weekend rate costing $15. If I didn't like the game I was only out $5 as a daily rate. Today, I buy 2 or 3 games a year and only top titles. I won't experiment anymore because games cost way too much. I'm sure I'm not alone on this.

Online 5G Gaming services could fill this gap if not offer even better deals because of volume. This is one of the big shifts coming to market beginning this year due to 5G service. Let's hope today's rumor turns into reality over the next few years.