Home Archives Contact Us Subscribe Twitter MeWe Facebook Patently Mobile
Video Report: CNBC's Interview with Apple's CEO Continues with topics Including the Indian Market, iPhone XR & more
Apple's Q1 of any year will be lower than the Holiday Quarter but the Nikkei thinks that a 10% Cut in iPhone Orders is big News 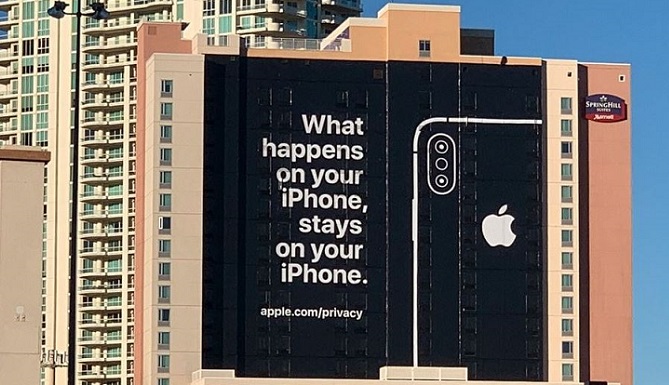 As Google announced that their Google Assistant will be on one billion devices by the end of January, Apple wanted tech savvy fans at CES 2019 to remember that privacy still matters by posting a multi-story banner next to the building hosting CES 2019.

Obviously those purchasing devices with the Google Assistant aren't paying attention to Apple's sales pitch. Apple's Privacy Policy is like the 11 commandment drawn from Mount Sinai. Thou shalt not collaborate with evil Pharisees who sell user data for profit.

Apple's CEO hammered social media earlier this year in Brussels by saying that personal information is being 'weaponized' against us with military efficiency."

Coincidentally this week Apple hired "former Facebook employee who became one of the social network’s most prominent critics has been recruited by Apple. Sandy Parakilas monitored software developers’ privacy and policy compliance at Facebook for a year and a half before he left the social network in October 2012. At the time, he warned senior executives of the potentially damaging consequences of the company’s data-sharing policies, but felt his concerns were downplayed.

The Financial Times reports that "Last year, following the Cambridge Analytica scandal, he gave evidence to the UK parliament’s digital, culture, media and sport committee, telling MPs that Facebook’s data protection practices were “far outside the bounds of what should have been allowed” between 2010 and 2014.

Mr Parakilas has urged the tech industry to improve its data protection practices, increase the use of encrypted messaging and 'verify the truth of statements that can be viewed by millions of people.'"

Of course who does the verifying of truth is a hot button issue in itself. News has always had a particular slant depending on who owns the media outlet. To deny that would be naïve. But that's a story for another day.

The Financial Times report further noted that Mr. Parakilas' "move to Apple marks the latest attempt by the iPhone maker to differentiate itself from Silicon Valley rivals such as Facebook, Google and Amazon over data protection and privacy.

Apple has recruited Mr Parakilas to work in its privacy team as a product manager, according to people familiar with the hire. His internal-facing role within Apple’s product marketing organization will involve working with teams all over the company, to ensure that new products in development protect users’ privacy and minimize data collection.

Mr Parakilas wrote in a blog post in late 2016. "There is no such thing as a 'neutral platform.' Facebook, Twitter and Google all profited from this perversion of democracy." You could read more of this report here.