During Qualcomm's Snapdragon Tech Summit 2018 we learned a little about their 7nm next-gen processors designed to kick start the 5G network revolution. One of the many new features that Qualcomm's processor will be able to handle in conjunction with their 5G modem is interactive live event 360° streaming as noted in one of their Keynote slides presented below. 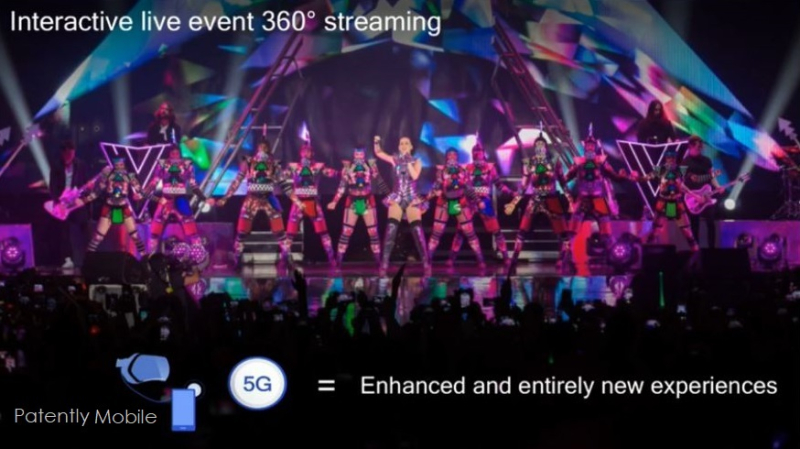 Today, Samsung sells the Gear 360 standalone handheld camera accessory that they promote as being able to record in 4K or be used for live broadcasts.

To address future interactive 360° broadcasting with Qualcomm processors for 5G networks, Samsung is working to miniaturize their 360° camera so that it could be quickly snapped unto a future Galaxy and/or Note smartphone.

The system is described as using magnets to snap the two camera modules together on the phone.

In Samsung's patent background explaining what their invention is to overcome they note that with the conventional 180-degree or 360-degree panorama imaging camera, each equipped with a single lens, it is impossible to capture an image in the state in which two identical products are joined to each other, and even after image-capturing, it is necessary to stitch two images by software.

With the 360-degree camera used in the state in which two lenses are fixed, it is possible to capture an image and to stitch images by hardware and software, but there is a problem in that the cameras cannot be used as independent cameras. In addition, the conventional 360-degree panorama camera has problems in that since multiple lenses are used, the camera is large and heavy, and since the camera has a complicated structure, the camera is expensive.

In addition, today's surveillance cameras may have problems with blind spots that allow professional crooks to work around these spots and stay out of view.

Samsung's invention overcomes the problems outlined and uniquely for the first time, developed a 360° camera accessory for future devices like a smartphone.

Samsung's patent application states that an electronic device, which is provided with first and second camera modules, include: a housing; a lens assembly disposed inside the housing and including at least one wide-angle lens; an image sensor disposed under the lens assembly, and configured to convert a hemispherical optical image transmitted from the lens assembly into an electrical signal; a base disposed under the housing and configured to mount the image sensor or a printed circuit unit thereon; and a coupling unit disposed on a face of the base and including at least one magnet inducing coupling with an external device.

In addition, the electronic device may further include a communication unit disposed on a rear surface of the base and including at least one communication terminal configured to communicate the hemispherical optical image captured from the lens assembly, in a wired or wireless manner.

Further, the coupling unit may include one or more magnets disposed inside the plate, and the magnetics induce magnetic coupling with the external device.

And lastly, Samsung notes that it is possible to realize a structure capable of acquiring a panorama image or a three-dimensional stereoscopic image according to rotation and movement of the lens assembly. 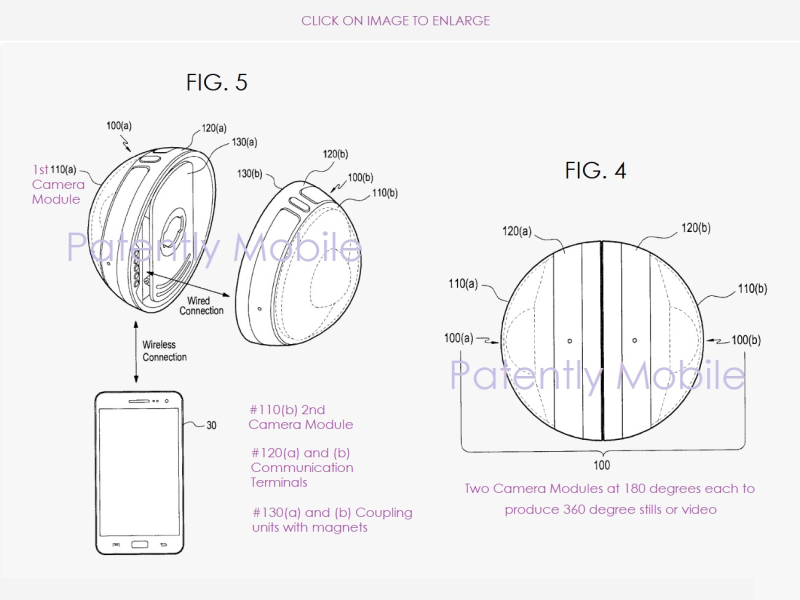 The two camera modules are held together magnetic units 130(a) and 130(b) of FIG. 5 so that they could be easily coupled to each other.

Samsung additionally notes that the 3D camera could also include face and voice recognition sensors for recognizing the user for security purposes.

Lastly, Samsung throws in that there will be a cover designed for the camera lenses so that it provides waterproofing and more. Samsung notes: "Thus, the user may not worry about flooding the camera at a beach or outdoors. For example, the electronic device #30 (smartphone) can be easily used for underwater imaging or aerial imaging" with the camera lenses covered.

Perhaps if this is a successful accessory for Samsung's smartphones Apple will consider a similar accessory or at least work with a third party developers to bring such a camera to Apple's ecosystem.