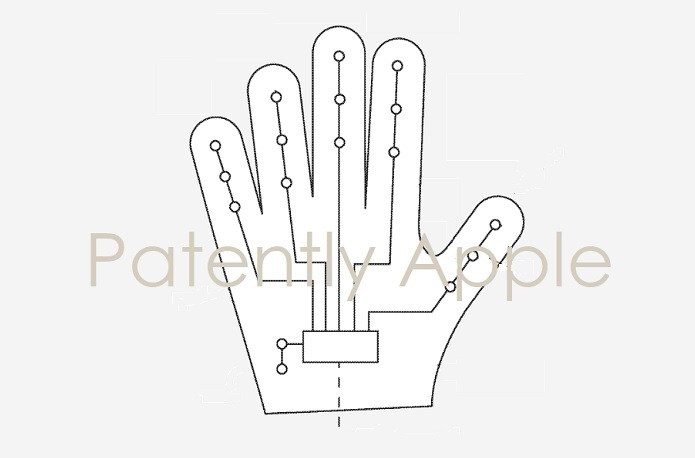 This has become a big week for Apple's engineering teams working on future products using smart fabrics. On Tuesday Apple was granted a major patent for smart fabrics that could be used in smart clothing and products like a new Apple TV remote.

Today the US Patent & Trademark Office published three patent applications from Apple that relate to smart fabrics. The most interesting one relates to a glove that primarily integrates smart fabrics with integrated circuity and force sensors. The glove works in conjunction with an Apple device like Apple Watch or iPhone. Specialty sensors within the glove could include a blood pressure sensor, a respiration sensor, a heart rate sensor and more. The data is sent from the glove and an iDevice to present results.

Apple's smart fabric glove shown in FIG. 4 includes a layer of fabric (#12) and/or other layers of material shaped in the form of a glove. Force sensing circuitry such as force sensors (#14) may be located on the top of one or more fingers (#38) of the glove and/or on other areas of the glove such as on palm (#40) or the top surface of the glove that covers the back of a user's hand. 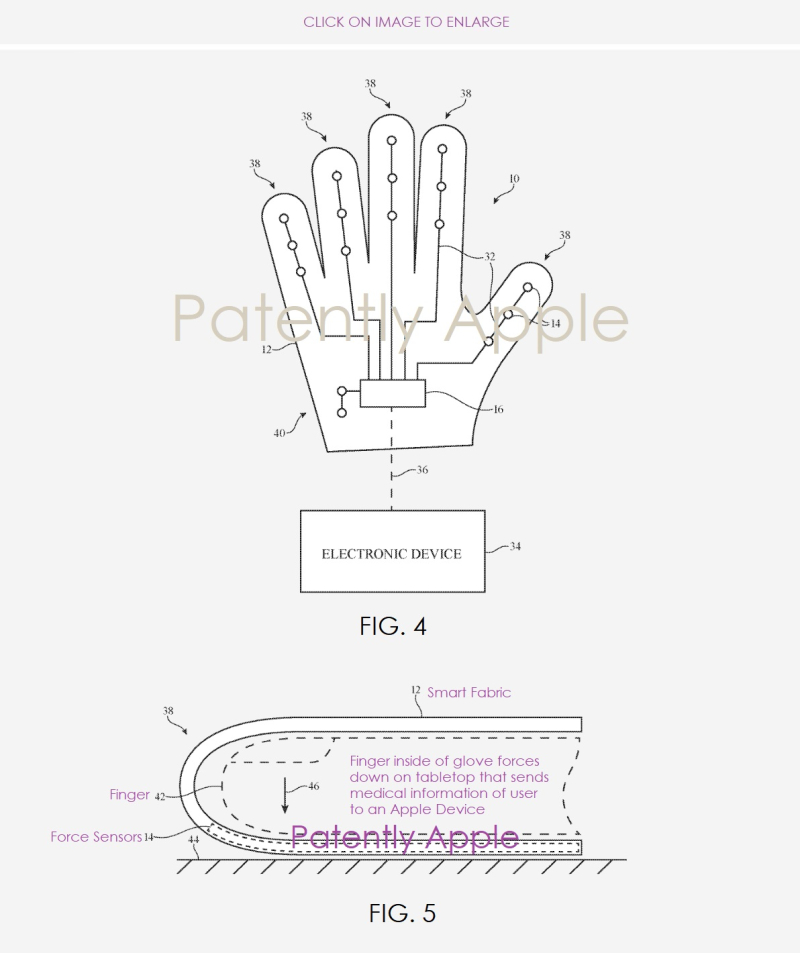 During operation, the control circuitry may use force sensors to gather force sensor measurements and may, as an example, provide this information to electronic device or controlling it. If desired, the control circuitry in and external Apple device may be used in processing sensor data. Force sensor measurements may be used in a glove or other input device, in clothes, as part of a heart rate sensor, blood pressure sensor, respiration sensor, etc.

Apple's patent FIG. 5 is a cross-sectional side view of an illustrative portion of the glove such as a finger portion. As shown in FIG. 5, the glove finger (#38) may include fabric that has been woven, knit, braided and/or sewn to form a shape appropriate for receiving a user's finger.  When the user presses glove finger in downwards towards a desk surface, a compressive force will be applied to the fabric and the force sensors between the finger and a surface will be able to take readings sent to an external Apple device.

Apple's smart glove may include non-fabric materials as well to form the glove into a viable shape. Structures may be formed from plastic, metal, glass, ceramic, crystalline materials such as sapphire, leather, etc.

Apple's patent application was originally filed back in March 2018. Considering that this is a patent application, the timing of such a product to market is unknown at this time. Two of the Apple engineers listed on the patent include Retired Dan Sunshine who was Manager of Softgoods Products design and Daniel Podhajny in Product Design who came to Apple from Nike's Knit Exploration division where he worked on Flyknit technology.

Other Smart Fabric patent applications that were published today by the U.S. Patent Office include:

02: Fabric Items Having Strands Varying Along Their Lengths