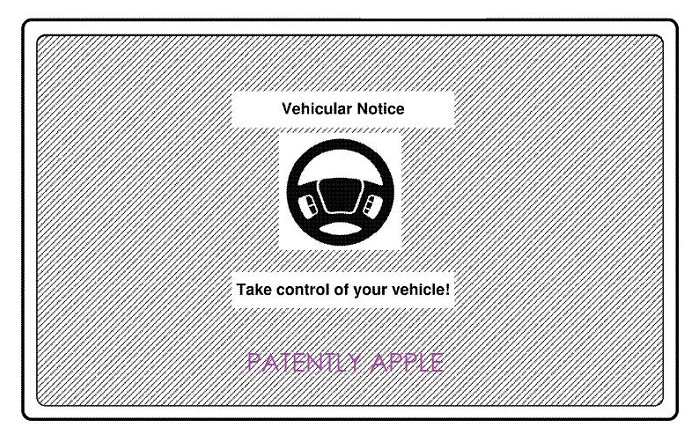 On U.S. Thanksgiving Day, the US Patent & Trademark Office published another patent application from Apple that relates to Project Titan, autonomous vehicles and systems. More specifically, the invention covers a new vehicular alert system that works in sync with Apple devices such an iPhone, iPad or MacBook.

A driver of such a vehicle may be tempted to read reports, news, emails and more on their iDevices while the vehicle is driving in autonomous mode. However, in various circumstances, the driver may be required to assume control of the vehicle and such a transition may be frustrated if the driver's attention is focused on their iDevice activities.

Accordingly, Apple see a need for electronic devices with faster, more efficient methods and interfaces for presenting vehicular notifications from a vehicle operating with a respective degree of autonomous control.

The method includes Apple devices (iPhone, iPad, MacBook) being connected to a new communication and alert system integrated into a vehicle that is operating with at least a respective degree of autonomous control.

While a user is reading information or looking at content like a movie, the vehicle is able to alert the driver of an autonomous vehicle with an on-screen computer alert that their attention is needed for operating the vehicle in a potentially dangerous situation. 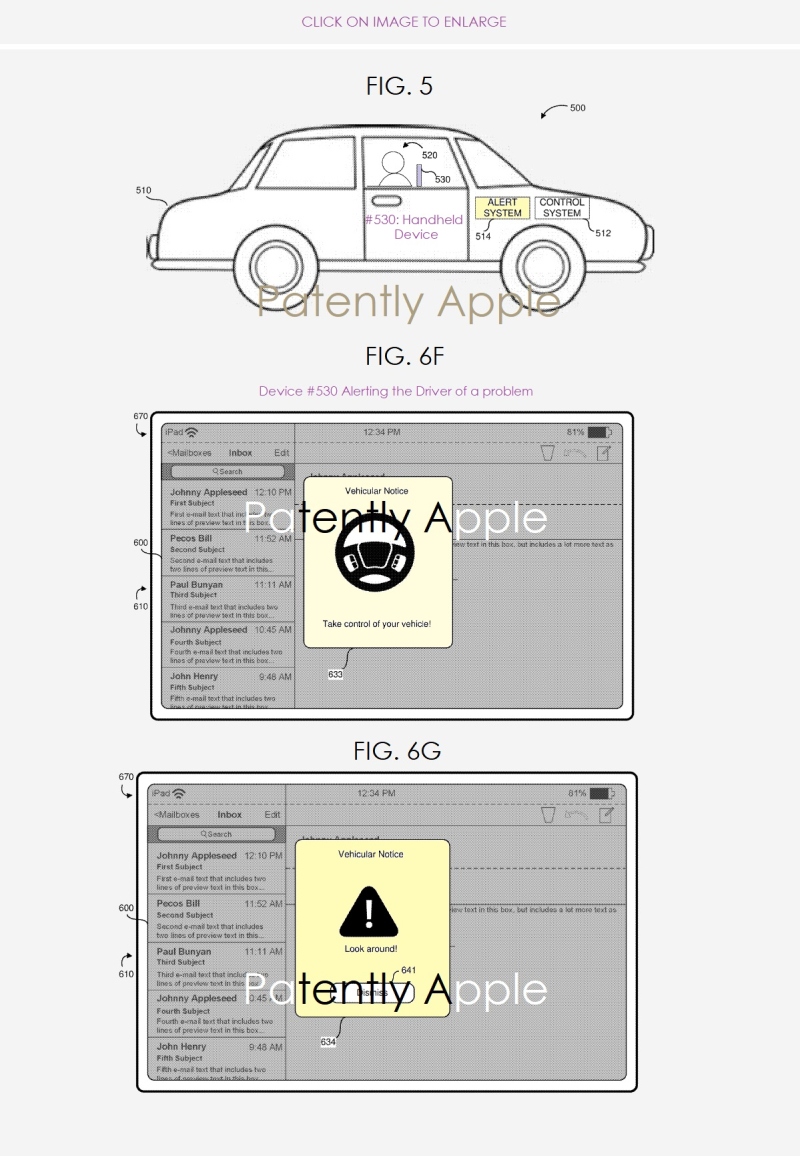 Apple's patent FIG. 5 illustrates an example vehicular environment 500 which includes a vehicle #510, a driver #520, and a handheld device #530. In various implementations, the handheld device is a phone, tablet, or laptop computer. The patent figures below that show various alerts. The first Vehicular Notice states: "Take control of your Vehicle!"

Apple further notes that the vehicle includes a control system #512 that allows the vehicle to operate with at least a respective degree of autonomous control. To that end, in various implementations, the control system includes (or is in electronic communication with) various sensors, such as proximity sensors and/or cameras, and uses the produced data to control one or more of the throttle, brakes, and steering of the vehicle.

Apple then presents the Society of Automotive Engineers (SAE) definitions for levels of automation as follows:

At SAE Level 0: the human driver does everything.

At SAE Level 1: an automated system on the vehicle can sometimes assist the human driver conduct some parts of the driving task such as apply the brakes when necessary.

For example, a vehicle traveling on a highway can maintain a fixed speed while the driver controls the steering of the vehicle to maintain the vehicle within a lane.

For example, a vehicle traveling on a highway can maintain itself within a lane and at a safe distance between another vehicle. However, in some circumstances, the driver may be required to take control of the vehicle, such as when the other vehicle departs the lane.

For example, the vehicle can navigate through an urban environment, but only in daytime or fair weather conditions.

At SAE Level 5: the automated system can perform all driving tasks, under all conditions that a human driver could perform.

While the industry is in the early stages of developing Autonomous Vehicle systems, you still have to call out what is blatantly stupid – and some of the alerts presented in Apple's patent filing are just that: stupid.

For instance, two of the alerts notify the driver that "The light is Green!" or that "The car ahead of you has moved." There are laws against texting while driving and unless the vehicle is 100% autonomous, drivers shouldn’t be allowed to freely read their iDevices and have to be told to move because the light is green.

As a side note,  I have to admit that I love slapstick. Nine out of ten times I'll crack up even though I've seen a particular fall a hundred times over. So when I saw patent FIG. 6F's Vehicular Notice stating "Take control of your vehicle!" I just cracked up laughing. You can only image the average driver freaking out with such a message flashing on their display while driving at highway speeds, throwing the tablet in the air to take control of the vehicle and causing complete mayhem trying to ascertain in record time as to what the potential danger actually is that they have to avoid.

It's funny on paper, but in real life the consequences would be fatal. Unless a vehicle is at SAE level 5 (complete autonomy), drivers should be banned from reading any devices while behind a wheel, alerts or not, end of story.