This week the US Patent & Trademark Office published a patent application from Apple that relates to reinventing an aspect of iPhone protective cases so that 'covered buttons' to turn on your iPhone or adjust the volume could use a magnetics system so as to deliver a crisp tactile click when pressing on these buttons as if there was no cover. Today's experiences aren't always that great.

Apple's iPhone could include an actuator unit with a button, where the actuator unit requires application of at least a threshold actuation force to an accessible surface of the button.

When the accessory device is coupled to the electronic device, the threshold actuation force of the button is altered. Thus, the tactile compensation unit may include a triggering unit and is rendered operable when the triggering magnetic element of the accessory device forms a magnetic circuit with the triggering unit, thereby causing the tactile compensation unit to compensate for the alteration to the threshold actuation force.

The tactile feeling of a button is usually predetermined by the design engineers based on expected desirable user feeling and user experience of the electronic device. For example, in some cases, it may be desirable for buttons to have a crisp tactile feeling to allow fast clicking.

Oftentimes this could change the tactile feeling of the button because the new button stackup that includes a portion of the accessory covering the button can have a new overall spring constant and may have a new threshold actuation force that can activate the button stackup. For example, an accessory formed from an elastic material such as silicone or leather may make an originally crisp button feels softer because the elastic material has a lower spring constant than the button.

Apple's solution is to create a system for accessory makers to include a magnet system within an iPhone cover under the buttons made of leather or an elastic material so that it could mate with the iPhone buttons to provide users with a clean crisp-like click like an iPhone without a case. 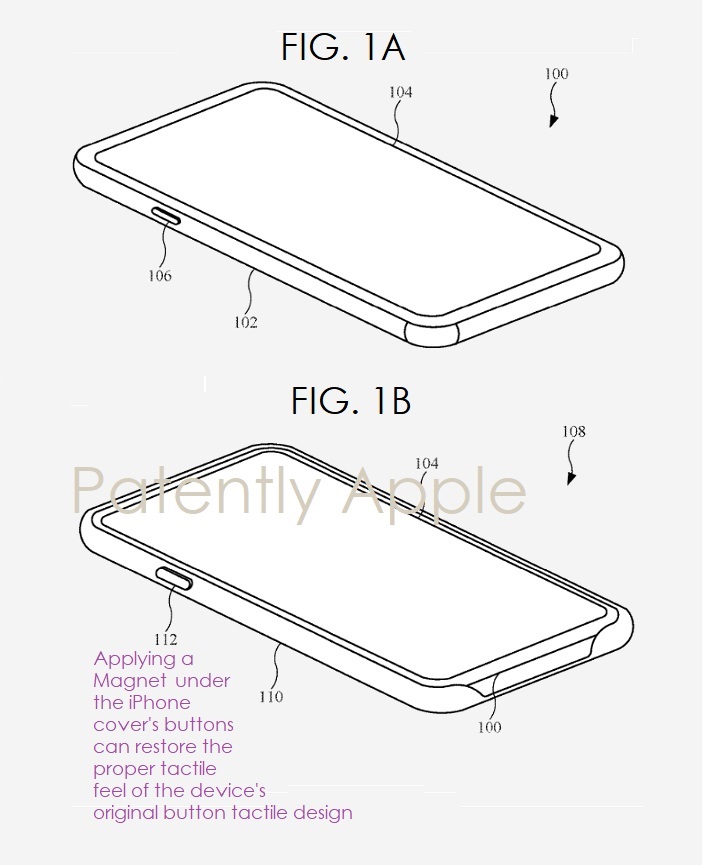