Earlier today Patently Apple discovered a next-gen battery patent application filed in Europe. As devices get smaller, better battery designs must be able provide users with better protection against every-day bumps, grinds and drops. The core of the invention focuses on a battery design for next-gen Apple products such as the iPhone, iPad, MacBooks and Apple Watch. In the bigger picture, Apple believes the basic principles of the battery design could scale to cover cars and right on through to "space travel equipment."

Apple notes in their patent filing that batteries, battery cells, and more generally energy storage devices, may be made from a host of materials.  As battery-powered devices continue to shrink, internal batteries that power them are forced into ever smaller form factors as well. In one sense, a battery may be reduced in size by reducing capacity, or more specifically reducing the amount of active material contained within the battery. However, as consumers continue to expect longer time of use in smaller designs, the amount of active material within a battery not only may be maintained, but designs may seek to increase both the volume occupied by active material and the amount of power produced by the active material. Because of the tension between volume within a battery and amount of space that may be used for active material, space within the battery for other components may be constrained even more.

In tandem with the physical reduction in device size is the more robust use of devices. From phones, media players, and fitness devices, to wireless components that may be used in conjunction with the devices, consumers are utilizing devices in daily activities that can expose the devices to more intense conditions, including more routine bumping, dropping, weather exposure, as well as almost constant use. This may require more robust designs and components for both the general device and the battery contained within the device.

When the devices being powered are small, such as watches and fitness devices, or wireless devices requiring dedicated batteries such as earphones and health monitors, more robust designs can be difficult to produce when the scale of the battery may be a few millimeters or less.

The present technology addresses many of these issues by incorporating features and components that may produce more robust battery designs, while limiting volume occupied by components aside from the cell material.  Many of the batteries described may be on a scale of a few millimeters or less, and internal components may be even smaller. By utilizing particular components and configurations as described throughout the application, the present technology may provide more robust designs that maintain high capacity for long periods of use.

Although the remaining portions of the description will routinely reference batteries that may be on a relatively small scale, it will be readily understood by the skilled artisan that the technology is not so limited.

The present designs may be employed with any number of battery or energy storage devices, including other rechargeable and primary, or non-rechargeable, battery types, as well as electrochemical capacitors also known as supercapacitors or ultracapacitors.

Moreover, the present technology may be applicable to batteries and energy storage devices used in any number of technologies that may include, without limitation, smartphones and mobile devices, wireless accessories including monitors, earphones, and speakers, handheld electronic devices, laptops and other computers, appliances, heavy machinery, transportation equipment including automobiles, water-faring vessels, air travel equipment, and space travel equipment, as well as any other device that may use batteries or benefit from the discussed designs.

Apple's patent FIG. I below shows a schematic cross-sectional view of their newly proposed battery design. 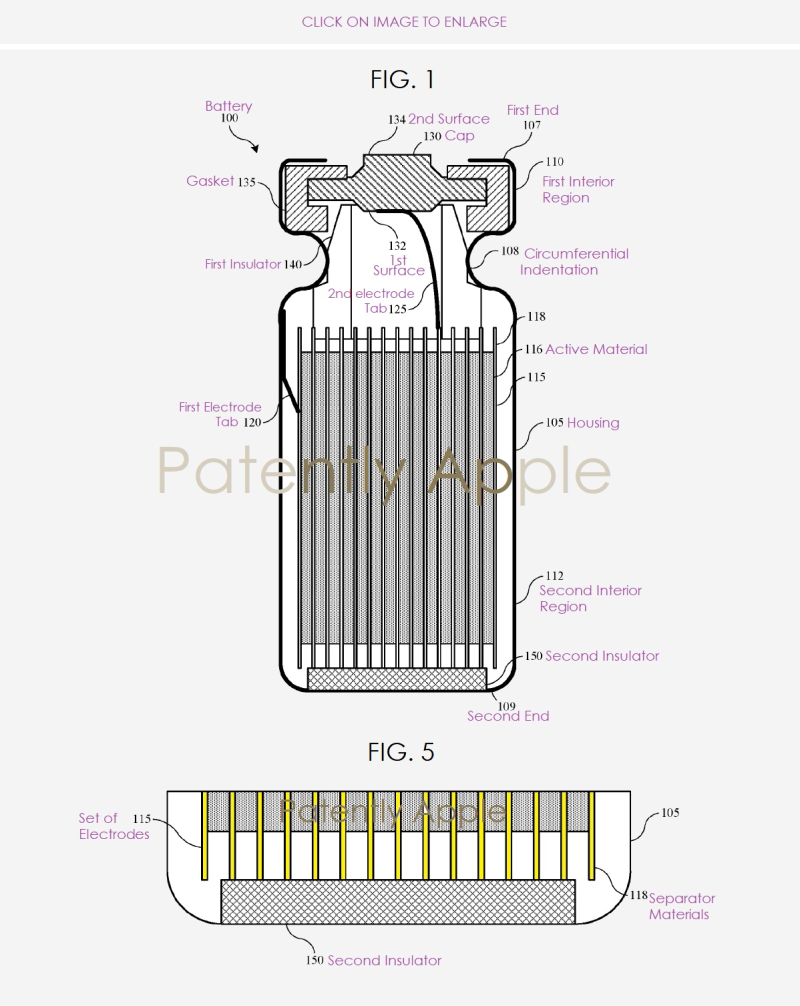 Apple's patent FIG. 5 above illustrates a schematic partial cross-sectional view of the new battery design. The illustration includes a view of a lower portion of the battery including housing #105, the set of electrodes #115, and second insulator #150.

Without second insulator, or some other insulative device, a short may occur during operation or during an event such as a drop, which may deform the separator 118 and allow contact between cathode active material and the housing.

Lastly, Apple notes that the design for a battery could be rectangular but also may include a rolled configuration, such as a jelly roll, stacked, prismatic or pouch-style cell in other embodiments.

Apple's patent application was originally filed in Europe back in Q2 2018 and published last Thursday November 8, 2018. Aspects of the invention are from Apple patents filed in 2017. Considering that this is a patent application, the timing of such a product to market is unknown at this time.

Some of the other Battery related Patents from Apple

01: Apple Granted a Patent for Solid-State Battery Technology for Portable Devices and Beyond

02: Apple invents a new Battery Design that will Increase Performance while better Protecting our Devices

05: The Race is on for Next Generation Fuel Cell Powered Devices