Home Archives Contact Us Subscribe Twitter MeWe Facebook Patently Mobile
Apple Sued for Patent Infringement over Key Technology behind the TrueDepth Camera, Portrait Mode, the Bokeh Effect & more
IDC reports that Apple is the only PC Company in the Top Five to Underperform the Market in Q3 2018

Late last month Patently Apple posted a report titled "Do the new iPhones have a Secret built-in 'Beauty Mode" that Artificially Smooths out Selfies? We did a follow up report in early October titled "For many Apple Fans, the iPhone XS camera issue is real despite Apple loving Experts telling them the problem is with their Eyes."

While the talking heads in the Apple community flipped over Unboxed Therapy's claims, the fact remained that whatever you call it, portrait mode was adding unfavorable color touch-ups plain and simple. The Unboxed report was simply saying Apple should give iPhone XS fans a control to tone it down or shut the processing off. The request was fair when looking at some pretty awful selfies that were way off color.

Yesterday Unboxed Therapy took a preliminary look at the new Pixel 3 smartphones from Google. A full review will be coming down the line. The one part of his video that's interesting and worth pointing out is when Lewis emphasized the Pixel 3's beauty-mode feature. The very feature that Unboxed Therapy suggested Apple should employ to give iPhone XS users better control of selfie quality instead of it being automated.

If you take a look at our cover graphic you could see the controls that Unboxed was pointing out. The Pixel 3 offers users the ability to turn "Face retouching" on or off.

In the Unboxed Therapy video provided for you below covering this Pixel 3 feature he states: "There's also an official beauty-mode feature when in Portrait mode. See, you could toggle it off. As far as I'm concerned, post processing when it comes to complexion and things like this, that's got to be an option. You've got to be able to turn it off if you don't want it. They have three settings. You could leave it off, you can go to natural, go to soft, I'm going to leave it off."

Lewis showed his portrait with beauty mode turned off and it does in fact look natural. 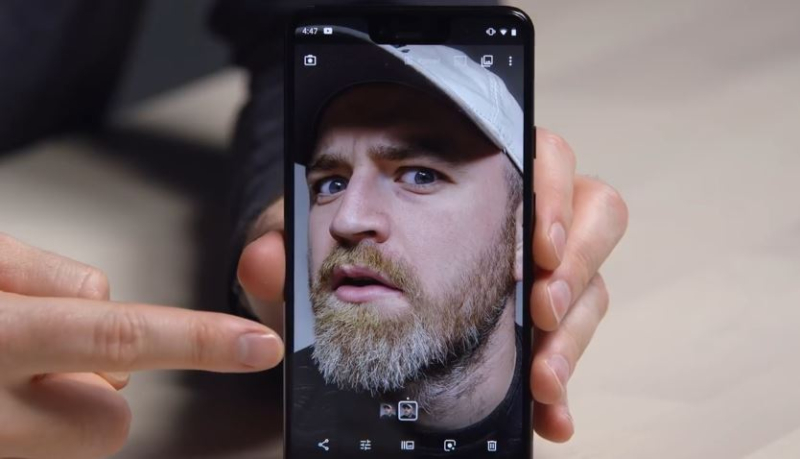 Yet the question becomes, did Google give Unboxed Therapy a heads-up about this coming feature so that he could use it against Apple's iPhone XS portrait mode? It sure makes Google look so smart now doesn't it?

Even though I still think that selfies on the iPhone XS look too processed for my tastes, it's something that Apple could easily tone down as all experts have admitted to thus far.

Considering that Apple offers a simple slide control to now control the depth of the bokeh effect, Apple could easily provide users with a similar control for maximum control over selfies. On that point Unboxed Therapy got it right no matter how the issue came into being.

However, the question remains, did Unboxed Therapy accidentally forecast the future or was he in snyc with Google. Of course we'll never know, as I can't prove that. Yet it's suspicious to a certain degree to be sure.

You could check out the video below to also see a few other camera features for the Pixel 3.

Of course Lewis Hilsenteger, owner of Unbox Therapy, loves to call everything "ProblemX-Gate" when it comes to iPhones. It's something Lewsi should tone down because the problems, like charge-gate, don't live up to the power of a "gate."

But let's be honest, for Lewis Hilsenteger, it's an addictive habit that rakes in the bucks. Just look at his hit levels between Charge-Gate and taking a first look at the Pixel 3. His Charge-gate report earned him 6.9 million hits vs. 2 million hits for the peek at the Pixel 3. It's his formula and he's sticking to it. As the saying goes, If it ain't broke, don't fix it.

Hey Lewis! Do a Little Google Bashing for a Change

And lastly, it would have been great if Unboxed Therapy's look at the new Pixel 3 would have pointed out that Google copied Apple's "Screen Time" feature. Better yet, point out that without a home button on the Pixel 3, Android copied Apple's iPhone X mode of swiping up to get to the opening screen and switching between apps.

It's nice that Lewis patted Google on the back and thought these features of Android were great, but it was disengenious of Lewis to let it slide that iOS introduced these features last year.

Will Lewis mention this in his full review knowing he's been using the iPhone XS as his main phone for a week or more now? We'll be watching for it Lewis. :-)