Next Tuesday Apple will be launching new products. The main focus will be on delivering a new iPad Pro with Face ID that has a more iPhone X look to it. The other major focus will be on a new low cost MacBook, with Bloomberg and others expecting a MacBook Air makeover.

Samsung is one of Apple's competitors that make every effort to steal some of the media's attention away from Apple product announcements to something of their own. Samsung purposely showcases their next-gen Note smartphones one month ahead of the next-gen iPhones, for example.

Today Samsung struck again by introducing their all-new new laptop for millennials called the "Flash" to get ahead of Apple's lower cost MacBook announcement. Samsung states that the new laptop offers a distinguished design as it comes with a retro-style keyboard and a dotted pattern on the cover.

Choi Young-gyoo, senior vice president of Samsung's PC business team: "To appeal to more millennial consumers, we worked with Samsung's design center in the U.K. while developing the new laptop."

Samsung said the most powerful feature of the new laptop is fast internet speed that supports up to 1.7 gigabytes per second. The new laptop, which will be sold at 810,000 won in South Korea (US$715), is powered by Intel's latest wireless LAN card that supports 802.11 ac 2x2 Gigabit Wi-Fi for a faster internet speed. Also the laptop is optimized for KT's GiGA WiFi network service.

The Flash laptop has a 13.3-inch Full HD display and offers a wide 178-degree viewing angle. The laptop enables users to use the Universal Flash Storage (UFS) card, which is five times faster than a MicroSD card. To prevent security breaches, the Flash laptop also supports a fingerprint scanner and Windows Hello security features. 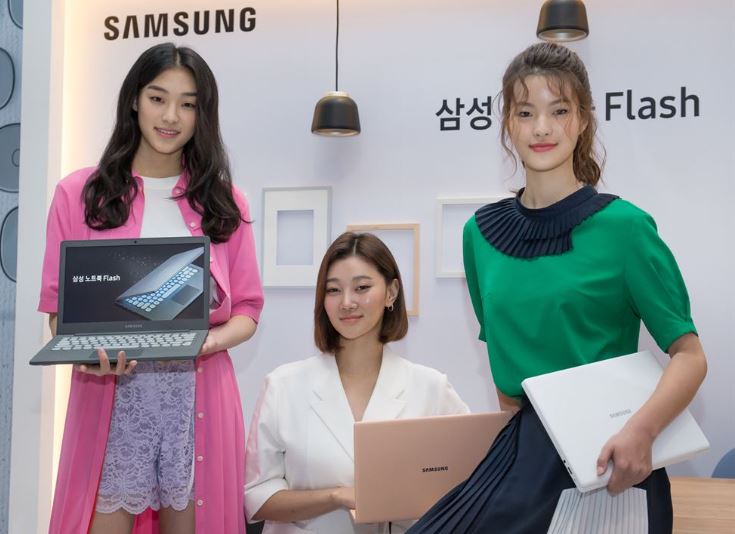 Samsung said the Flash laptop will come in three colors: linen white, twill charcoal and soft coral as noted in their marketing photo above.

In 2016 rumors were swirling that Samsung was getting out of the PC business and at one point the rumor pointed to Lenovo possibly paying $850 million for the Samsung unit.

At present, it appears that Samsung is doubling down on PCs. Last week TechRadar rated the Samsung Notebook 9 Pro the best 2-in-1 laptop on the market beating out the Google Pixel, the Dell XPS 15", Microsoft Surface Book, Lenovo and others.

While Samsung's new 'Flash' notebooks announced today are aimed at millennials, Samsung is now working on something quite radical: Laptops with a foldable display.

During a showcase event earlier today introducing the new Flash notebooks, a company official stated that Samsung is now working on the development of new laptops that will introduce new form factors including one with a foldable display as part of its efforts to innovate personal computer products.

Lee Min-cheol, vice president at marketing for PCs at Samsung clarified his comment by stating "like foldable smartphones, Samsung is collaborating with display makers to develop laptops with foldable displays that will not just simply fold in and out but create new value and user experience, amid the changing market trends for laptops."

Another area of development, according to Lee, is that they're working to develop large AMOLED displays for laptops with panel makers.

Knowing there's some doubt about Samsung's commitment to the PC market, Lee said that "PCs play a centric role among IT products in increasing connectivity with other mobile devices, so we will continue developing innovative PCs with partners like Intel, Microsoft and KT."