In April Patently Apple reported on PC sales and Apple was shown to be in the cellar's fifth position with Growth being non-existent and in fact down by close to 5%. Today IDC posted their PC statistical chart for Q3 and we're able to see that Apple is once again in the cellar position with even a higher negative growth factor of -11.6%. The industry as a whole was down 0.9%. 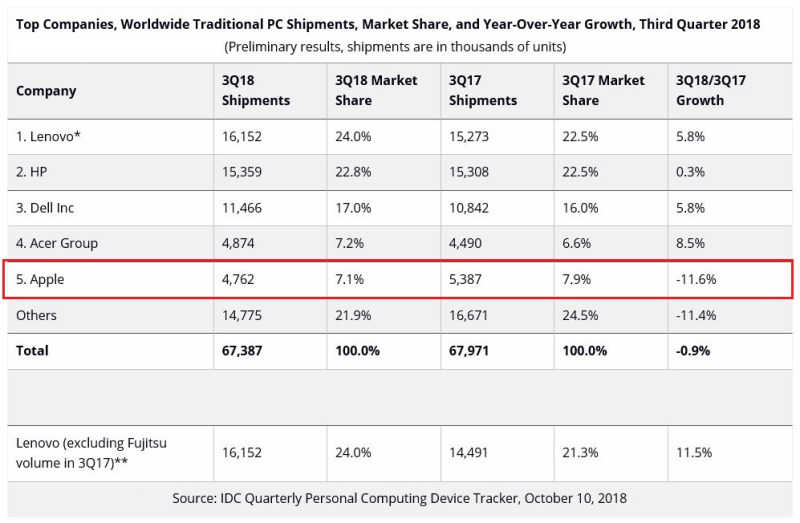 IDC reports that "The traditional PC market has trended toward stabilization since 2017 and even flirted with solid growth in 2Q18. While demand from mature regions remained key to the market, many emerging markets had to contend with unfavorable currency headwinds and other politico-economic factors that cramped demand. In addition, heading into Q3 there were some concerns about processor shortages. Despite these concerns, most of the top OEMs were able to fulfill a sizable portion of their demand and outperform the market. All in all, the quarter appears to have been driven by pockets of strong demand as well as a focus on increasing inventory ahead of further supply issues and expected price hikes. From a geographic perspective, all regions exceeded forecast, though Latin America and Asia/Pacific saw year-on-year declines."

For the USA market, IDC reports that "The U.S. PC market had yet another growth quarter with a total of 17.2 million units shipped. The boost in PC volume was a result of growing demand for notebook PCs in the enterprise segment and increasing popularity of gaming systems that supported the consumer segment."

In respect to Apple, IDC added that "Apple finished the quarter in 5th place, declined over 11%, and was the only top 5 company to underperform the overall market." For more on this report click here.

While Apple fans are hoping for a Mac update, especially for MacBooks, it's still in the air. If they don't deliver, expect Q4 PC sales for Macs to tank again.