On Wednesday Patently Apple posted a report titled "IDC reports that Apple is the only PC Company in the Top Five to Underperform the Market in Q3 2018." IDC only published global PC shipments and not regional U.S. Shipments. Gartner published their PC findings after IDC and they did include statistics on PC shipments in the U.S. The problem with Gartner's statistics is that they blur reality without cracking a smile. 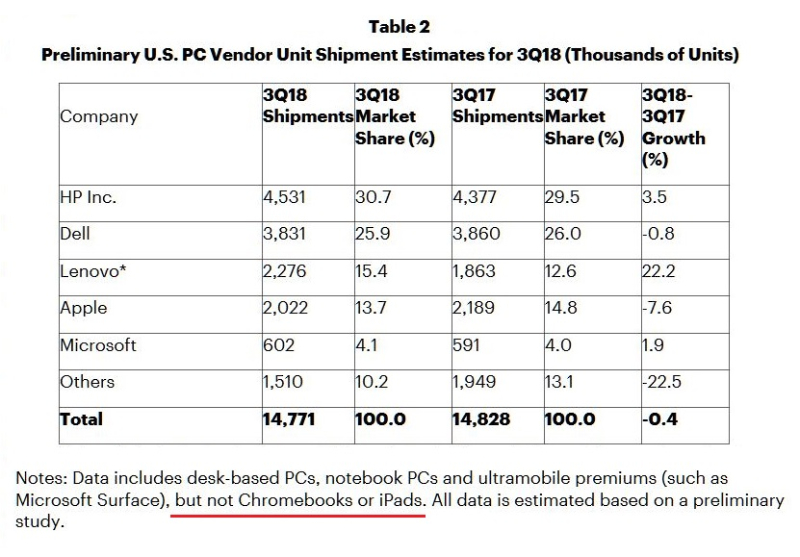 Microsoft's Surface debuted on the market in 2012. In six years Microsoft has been unable to get their tablet sales acknowledged on either Gartner or IDC's top vendor shipment charts for tablets. Now magically Gartner has Microsoft appear in their PC Vendor Shipments chart at #5 under Apple at #4 as noted above.

If Apple's iPads were considered a PC by Gartner, then it would be ball game over for Microsoft and most other traditional PC makers. By cherry picking their distorted reality, making up irrational rules, we end up with skewed data for Microsoft's benefit alone.

In short, without elongating the argument, Gartner's PC stats are fake. It's fake news. It might make the Microsoft Surface team happy to finally be recognized as a top device maker in the U.S., but in the end it's all a mirage courtesy of Gartner. How royally pathetic is that?