The cover graphic for this report is that of the Tesla Semi, an all-electric battery-powered Class 8 semi-trailer truck prototype which was unveiled on November 16, 2017 and planned for production in 2019 by Tesla, Inc. Tesla CEO Elon Musk said that the Semi would come standard with Tesla Autopilot that allows semi-autonomous driving on highways.

Today the U.S. Patent and Trademark Office officially granted Apple a patent titled "Peloton." It too is about an autonomous truck system traveling with an attached secondary vehicle in a vehicular peloton along a roadway. The secondary vehicle connected to the main vehicle is to provide a computer system and more importantly a secondary backup battery system to ensure the truck isn't stuck looking for a power station to charge up.

While the patent gives the impression that it's about a larger Semi type truck, especially because of one of Apple's inventor's focus is on trucks, technically the patent could cover a regular family truck that is connected to a family trailer or car connected to a camper on a long family trip.

In some cases, a navigation range of a vehicle from a given location is at least partially restricted by the internal energy storage of the vehicle, which can include fuel, electrical power, etc., which are consumed by one or more engines included in the vehicle to cause the vehicle to move.

For example, where a vehicle includes electrical motors which move the vehicle via consumption of electrical power, replenishment of internal stored energy can include navigating the vehicle to an electrical charging station, but such stations may be absent along the present driving route of the vehicle, and recharging at such a station, even if located along the route, can be time consuming.

Apple's patent FIG. 1 illustrates a schematic block diagram of a vehicle which includes a vehicle navigation system and at least one power connection assembly.

The vehicle navigation system (VNS) can control various control elements based on driving control commands generated at one or more user interfaces, navigation control modules, etc. The VNS, in some embodiments, is configured to autonomously generate autonomous driving control commands which control various control elements of the vehicle to autonomously navigate the vehicle along one or more driving routes.

Vehicle #100 will be understood to encompass one or more vehicles of one or more various configurations which can accommodate one or more occupants, including, without limitation, one or more automobiles, trucks, vans, etc.

The vehicle can include one or more interior cabins ("vehicle interiors") configured to accommodate one or more human occupants (e.g., passengers, drivers, etc.), which are collectively referred to herein as vehicle "occupants." 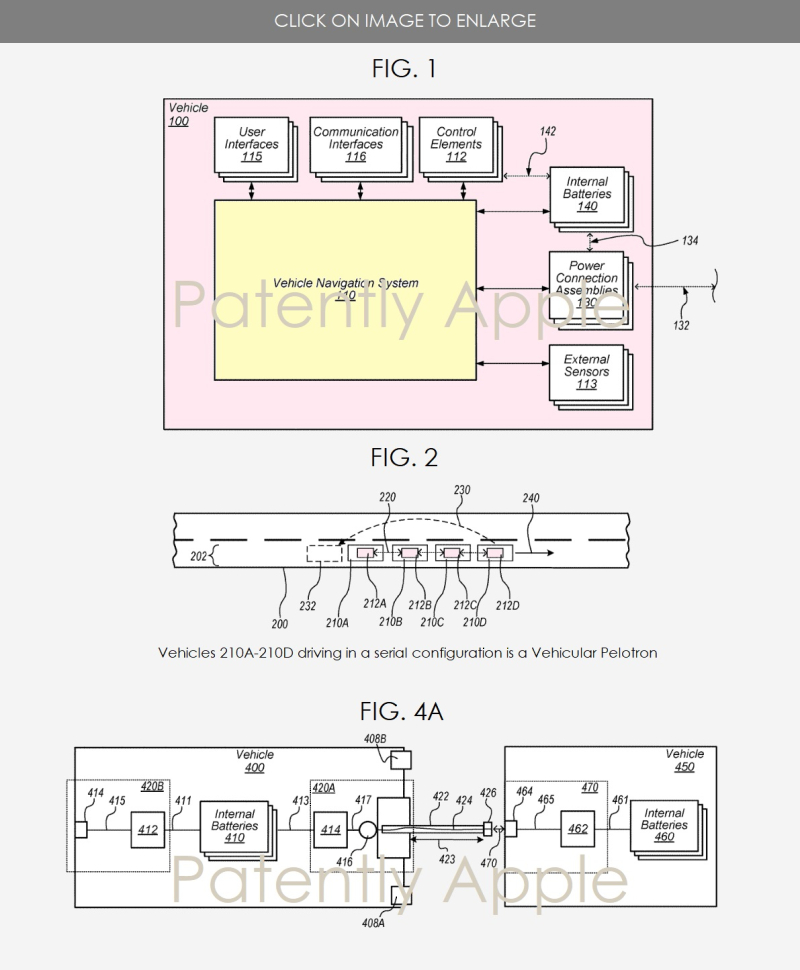 In some embodiments, multiple vehicles 210A-D can be navigated along a roadway #200 in a serial configuration in a common roadway lane #202, referred to herein as a peloton, vehicular peloton, etc.

For truckers on a long haul, the added battery system is to also support creature comforts of the drivers to enjoy TV, a gaming console, a computer and much more.

Technically, Apple notes that the system could apply to other vehicles such as vans and cars. Perhaps for a car or smaller truck it could be that the attached vehicle is a camper or trailer for long distances.

Whether Apple will simply license the technology or develop such a peloton vehicle with a partner in the future is unknown at this time.

Will it actually challenge the Tesla Semi? Who knows, but the byline is to attract those interested in the field of autonomous trucks in particular and general vehicles overall.

The first inventor on Apple's granted patent is Randol Aikin, PhD who worked on Special Projects at Apple. One part of his LinkedIn Profile states: "Building Self-Driving Trucks; and then proving that they work." He left last year to work at Uber and then IKE which is an autonomous truck startup. The second inventor on the patent is Malcolm Northcott, a Sensor Systems Engineer at Apple.