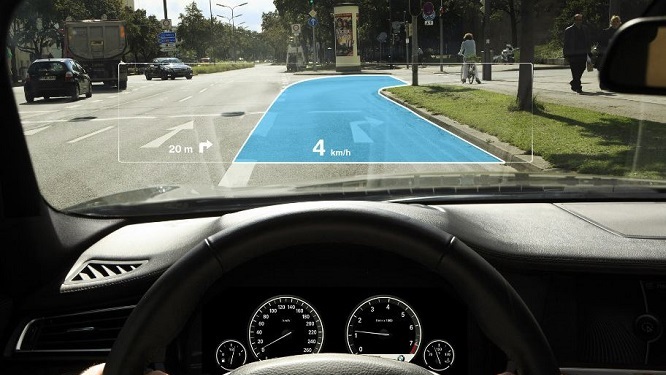 In early August Patently Apple posted a patent report titled "Apple Invents an Augmented Reality Windshield that even Supports FaceTime Calls between Different Vehicles." Today the US Patent & Trademark Office published a patent application from Apple that reveals more aspects of Apple's Augmented Realty assisted windshield's invention that could be used on manned and unmanned vehicles, aerial vehicles, submersible vehicles and more. Apple even envisions that some day AR Windshields will be used in driver education both in real and simulator environments.

Apple begins their patent application with a broad overview. Autonomous machines, including robots, aerial vehicles, aerospace vehicles, submersible vehicles, automobiles, other ground vehicles, and the like, are capable of operating within their respective environments with limited input from a user.

It is with these observations in mind, among others, that various aspects of the present invention were conceived and developed.

The various systems and methods disclosed generally provide for interaction between a user and a machine. The example implementations discussed in Apple's patent application reference an interactive user interface for a manned autonomous vehicle for transporting a user. However, it will be appreciated by those skilled in the art that the presently disclosed technology is applicable in other human machine interface (HMI) contexts and to other manned and unmanned autonomous machines, including, without limitation, robots, aerial vehicles, aerospace vehicles, submersible vehicles, ground vehicles, and the like.

The presently disclosed technology may be further applicable to other types of machines and user devices, such as a personal computer, workstation, terminal, mobile device, smartphone, tablet, multimedia console, and other computing devices.

For example, the interactive windshield interface #104 may turn opaque, such that a user cannot see through the windshield, and display a simulated environment for a student to learn how to drive. 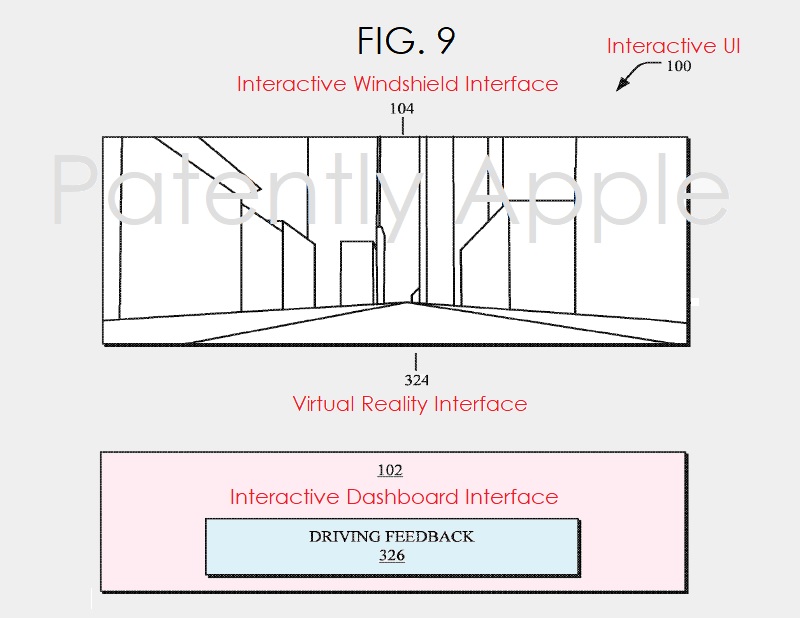 In addition, the interactive windshield interface #104 may permit the transmission of light and overlay artificial elements through augmented reality as a learning course while the student is driving.

In some cases, the interactive dashboard interface #102 provides driving feedback 326, including instructions, recommendations for improving technique, scoring, and/or the like.

Find me a Coffee shop on my Route 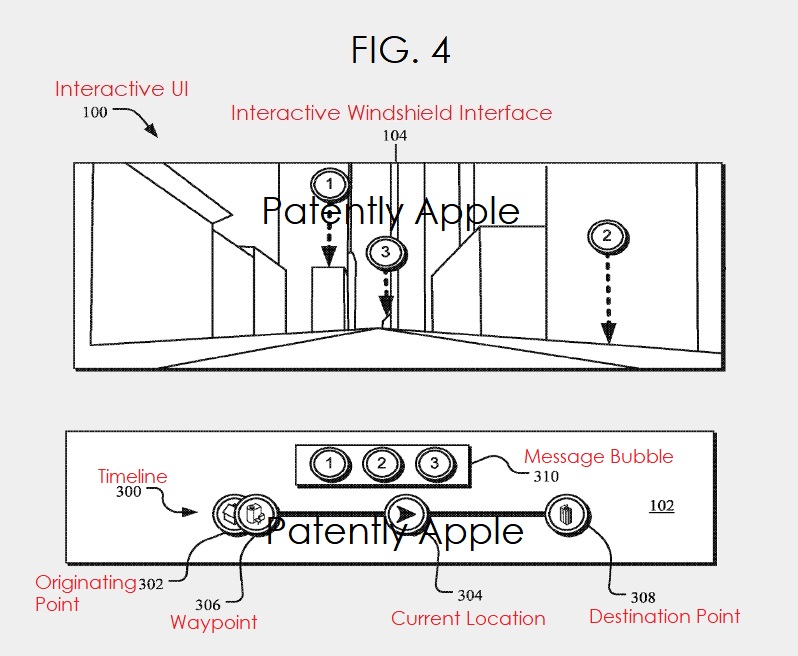 In another example, we're able to see in Apple's patent FIG. 4 above that the user may interact with timeline #300 to express an interest in stopping for coffee on the way to the final destination point #308.

In one implementation, the timeline (Siri) may automatically provide coffee as a waypoint option based on user preferences or user history. In another implementation, the user will just ask Siri "Find me coffee" and an option will be provided that's in context with the user's final destination.

Alternatively or additionally, the options may be projected into a field of view of the user through augmented reality using the interactive window interface 104.

As noted at the top of our report, we covered Apple's first AR Windshield patent back in August that elaborately detailed an autonomous vehicle navigation system. It also covered a wide range of elements involved in a future autonomous vehicle such as internal and external sensors, control elements, vehicle interfaces and the ability of having a FaceTime chat using the windshield as the display.

Apple notes that "the interactive window interface #104 as noted in the patent figures presented above provides a view of an environment external to the autonomous vehicle. The view may be a live direct view through a transparent cover disposed in an opening in the autonomous vehicle, such as a windshield, window, porthole, door, and/or the like.

The view may alternatively be a live indirect view reproduced using one or more output devices. In one implementation, the interactive window interface #104 provides an augmented reality view where the external environment is interactive and digitally manipulable.

Stated differently, the interactive window interface may utilize augmented reality techniques, along with computer vision techniques, to modify one or more elements in the external environment and/or to overlay interactive features or information.