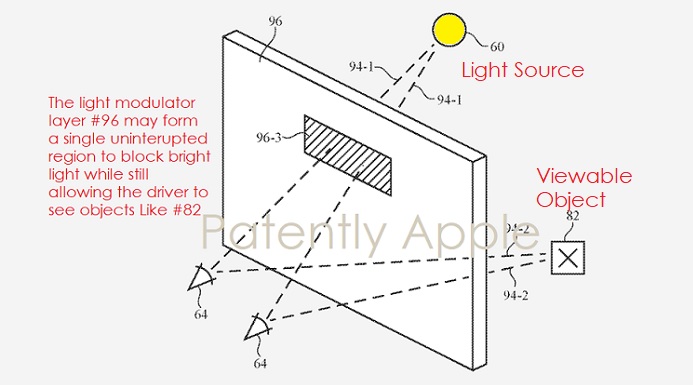 Today the US Patent & Trademark Office published a patent application from Apple titled "Active Glare Suppression System." It's Apple's 15th Project Titan patent to have surfaced in the U.S. and Europe since June. Today's invention covers an anti-glare system for vehicles.

Apple notes that vehicles such as automobiles have a rear mirror and left and right side mirrors. Ambient light such as sunlight and light from headlights can reflect off of the mirrors and into the eyes of a driver. A driver may also be exposed to sunlight, light from headlights, and other sources of glare through the windows of a vehicle. Sunshades and window tinting may be used to reduce glare somewhat, but can be cumbersome and ineffective.

Apple's invention provides improved ways in which to reduce glare in a vehicle.

A vehicle may have structures such as windows and mirrors that have the potential to allow glare from external objects to shine into the eyes of a driver or other vehicle occupant. The windows may be side windows, front windows, windows on a vehicle roof, rear windows, or other suitable windows.

A control circuit may gather eye location information indicating where the eyes of the driver are located using a sensor such as a camera mounted in the vehicle and may gather information on where an external object that produces glare such as the sun, a reflective portion of a vehicle (e.g., a shiny bumper or rear window on a vehicle on a roadway), a street lamp, or other source of glare is located outside of the vehicle and the direction in which the external (exterior) object is projecting light towards the vehicle (e.g., towards the eyes of a driver or other vehicle occupant). Based on this information, the control circuit may direct a light modulator on a window or vehicle mirror to selectively darken an area that prevents the glare from reaching the eyes of the driver.

The light modulator may be patterned to form a series of strips, rectangular regions, or areas of other shapes that extend along the upper edge of the front window of a vehicle and that therefore allow the light modulator to serve as an electrically adjustable sun shade. A light modulator may also be incorporated into other windows in a vehicle to reduce glare from headlights, the sun, and other light sources. Vehicle mirrors that are provided with light modulators can be adjusted to selectively darken a portion of the mirror that would otherwise reflect glare into the eyes of the driver.

An active antiglare system may be used in any suitable environment in which glare is present (e.g., in a boat, airplane, helicopter, motorcycle, train, truck, construction vehicle, or other vehicle, house, office, store, or other building, etc.). Antiglare layers may be formed on mirrors and/or windows or other optical layers that can serve as supporting surfaces for light modulators in these environments. Configurations in which antiglare layers are incorporated into the windows and/or mirrors in a vehicle 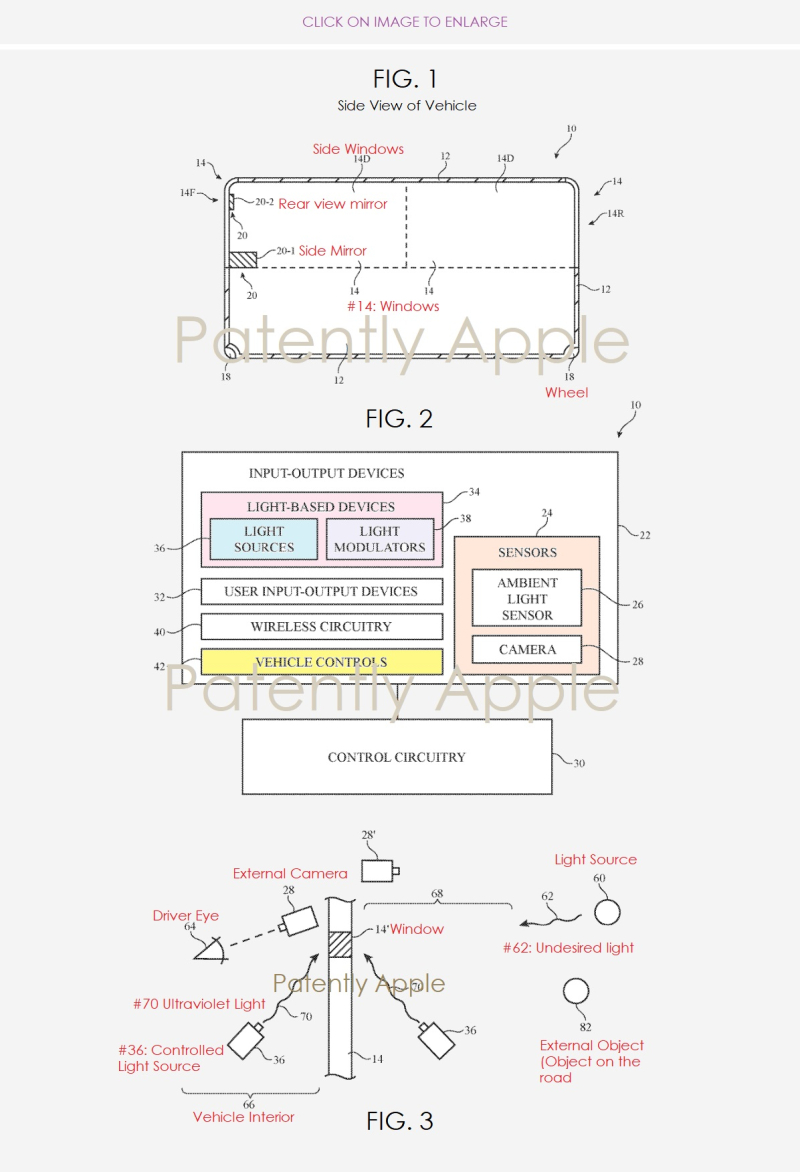 Apple's patent FIG. 5 below is a flow chart of illustrative steps involved in adjusting a glare reduction device in real time to reduce glare; FIG. 6 is a top view of an illustrative sensor such as an image sensor system based on a stereo camera of the type that may be used to gather eye location information. 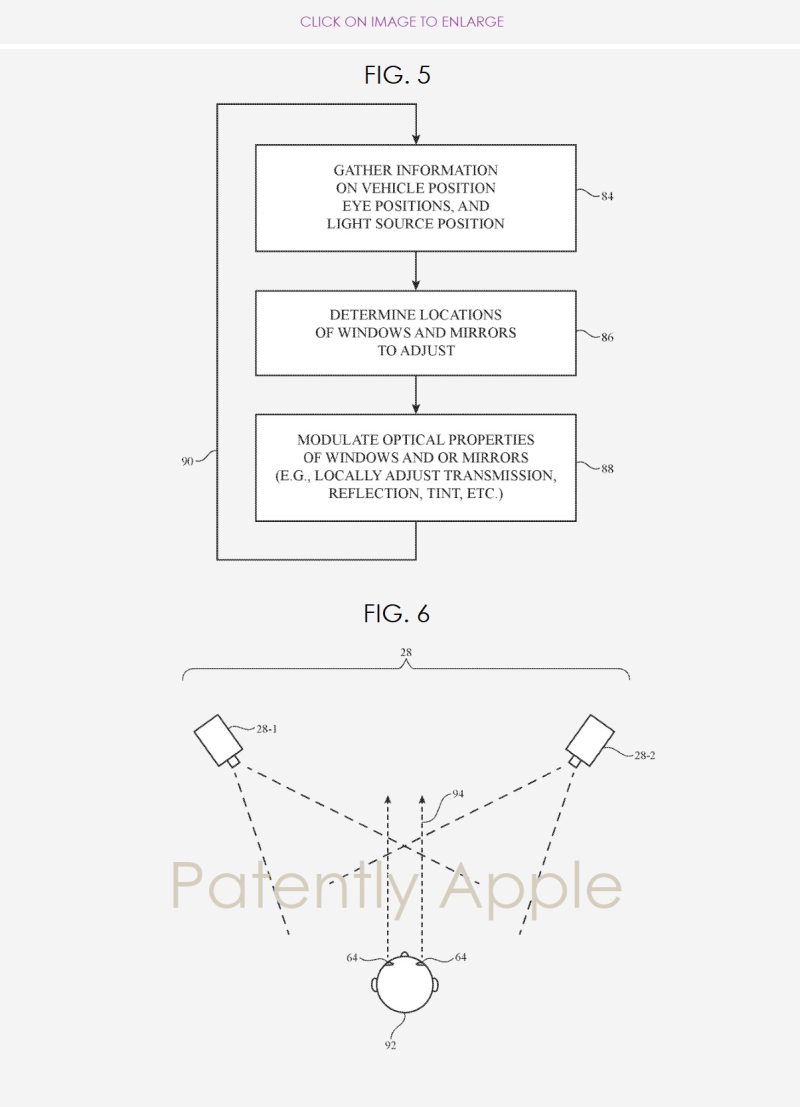 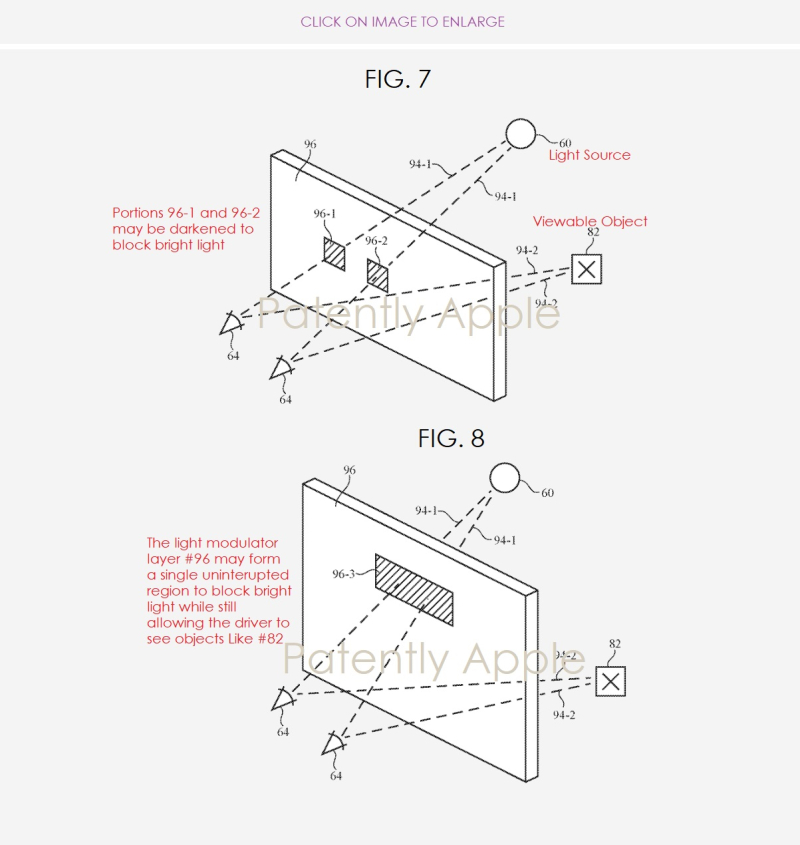 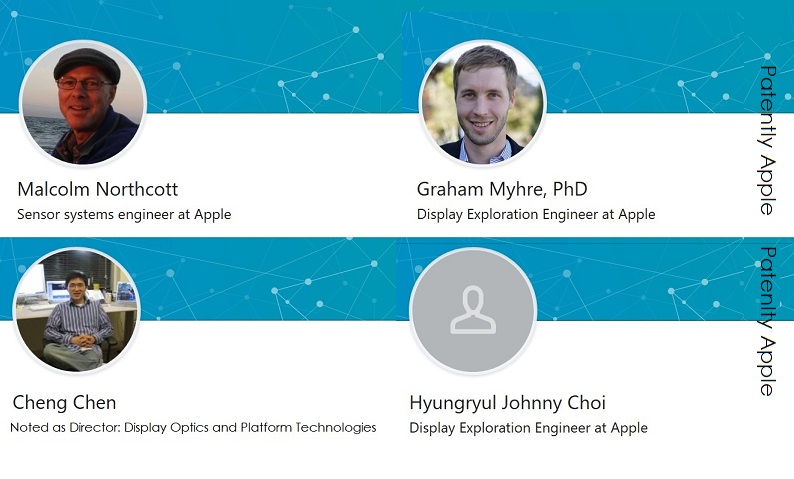