Home Archives Contact Us Subscribe Twitter Facebook Patently Mobile
Norman Foster, the Man behind Apple Park HQ, talks about meeting Steve Jobs & Talking about Design over Pizza
Apple has acquired the Worldwide Rights for the "The Elephant Queen" Documentary at the Toronto Film Festival and more

Today Patently Apple discovered an Apple patent in Europe that was published yesterday titled "System Access using a Mobile Device." The invention describes a system for enabling car access with a phone. It also describes the transactions that may happen between the car and the phone as well as the operations and data to be stored on both sides. Apple's patent filing also points to a driver being able to use their Apple Watch.

Apple's patent Fig. 13 presented below is a block diagram illustrating exemplary short-range wireless (e.g., NFC) connectivity. In some embodiments, examples of actions that do not require authentication (e.g., unless explicitly configured by the user on the device) may include door lock/unlock transactions and engine start transaction. 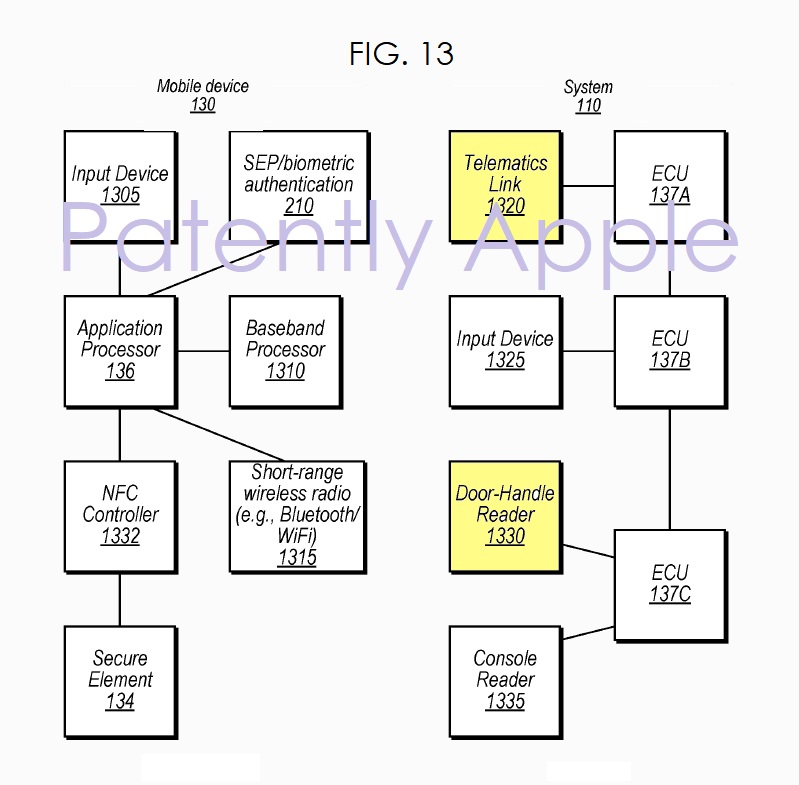 The term "ECU" is one example of a control unit and is a term of art which is intended to be construed according to its well-understood meaning, which includes circuitry configured to control one or more operations of a vehicle.

Examples of vehicles include, without limitations: aircraft, marine vessels, RVs, automobiles, buses, railed vehicles, spacecraft, robotic devices, etc. Examples of systems that may not be vehicles further include: physical locations such as buildings, transit access control, and internet of things or home automation devices or controllers.

To review Apple's invention description in depth, please review the full Scribd document below provided to you courtesy of Patently Apple.

According to the European database, the international filing date was March 01, 2018 and published on September 7, 2018. Considering that this is a patent application, the timing of such a product to market is unknown at this time.