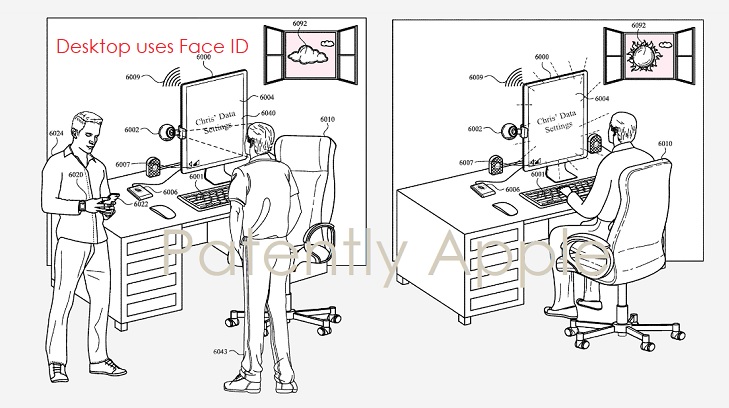 Today the US Patent & Trademark Office published a patent application from Apple that generally relates to user interactions with a new desktop system that is ergonomically friendly and designed for multi-user environments.

In many ways the preferences set-up for a desktop system in a shared environment is the focus of Apple's invention. Whether it's a situation of multiple users in an office, at home or at school, the newly invented system makes it a breeze for each individual user to set up their preferences for a shared desktop or iPad Pro. The system could also reset the height of an office chair to make the ergonomically friendly system work right for those involved.

Perhaps more importantly to some, Apple's patent isn't only software oriented. It's tied to a next generation Apple desktop that is shown to be using Face ID to recognize authorized desktop users versus someone snooping. Further in respect to hardware, Apple illustrates a desktop display capable of being set up in both landscape and portrait mode that's not available today on iMacs.

When Marcel Van OS, one of Apple's top designers of the original iPhone is listed on an Apple patent or project, you take it very seriously.

Earlier this month Patently Apple posted a report titled "While Windows Continues to Lead in Business on the Desktop, it's Apple's iOS that dominates in the Handheld Category." Yet a patent published today by the U.S. Patent Office would suggest that Apple may be willing to revisit the enterprise desktop space.

Since 2014 Apple has been building strong business partnerships with IBM, SAP, Deloitte, Accenture, GE, HP and others. In fact Apple and Salesforce announced a new business partnership and CNBC business guest analyst Jim Cramer thinks that this is a huge deal and serious business move on Apple's part.

In Apple's patent application published today the company notes that as technological progress advances, many electronic devices are becoming more user configurable allowing for a more comfortable and user specific ergonomic environment. At the same time, collaboration between users is also on the rise. Consequently, there is a need to allow for users to collaborate and allow for quick adjustment for each user's ergonomic environment preference.

Large companies that have staff working 24-7 like service centers need to have one desktop system handled by three different employees within a 24 hour cycle with each having their own preferences for display orientation and other desktop factors to make it comfortable for each employee. Automating this process would be ideal.

On Tuesday Apple was granted a practical Project Titan patent for driver preferences to be logged into an iPhone and when a user will buy a new vehicle in the future, the iPhone will communicate with the new vehicle's telematics system and automatically set the user's mirror and seat positions, set favorite radio stations, adjust the steering wheel and more. This same process appears to now be crossing over to the enterprise, the home and education. The patent's slant is clearly enterprise heavy as the patent figures prove out.

However, making the proper adjustments is a painstaking activity, which requires prior knowledge of how to make the adjustments and memory recall to remember which adjustments are preferred.

Making the necessary ergonomic adjustments is especially bothersome when several people are sharing the same work environment. For example, a tall user and a shorter user may both be collaborating on a project by taking turns using one computer. However, the users do not have a quick and easy way of adjusting the ergonomic environment so as to make the environment safe and pleasant each and every time they rotate using the computer.

Using prior technology, each user would have to independently configure each piece of equipment every time they sat in front of the computer. Similar concerns are also present in a non-work environment when two users are sharing a device. For example, a television's volume settings may need to be adjusted louder to accommodate the user who is hard of hearing.

Because Apple looks holistically at a problem, they make their hardware and software work together seamlessly. Introducing user settings automation could very likely be implemented in a next-gen iMac.

In the first round of Apple's patent figures we're able to see a desktop in an office environment and a first worker making ergonomic adjustments to his work preferences.

Apple has stated that they will be introducing a new kind of modular desktop for 2019. In that light, Apple could at that time introduce a display capable of working in both landscape and portrait modes as the patent figures below are illustrating.

Whether Apple will make these dual mode displays or work with 3rd party partners on this isn't known at this time. Yet with Apple reportedly moving to a new modular desktop design, they could technically introduce a new family of Apple displays at that time supporting dual mode functionality along with Face ID. 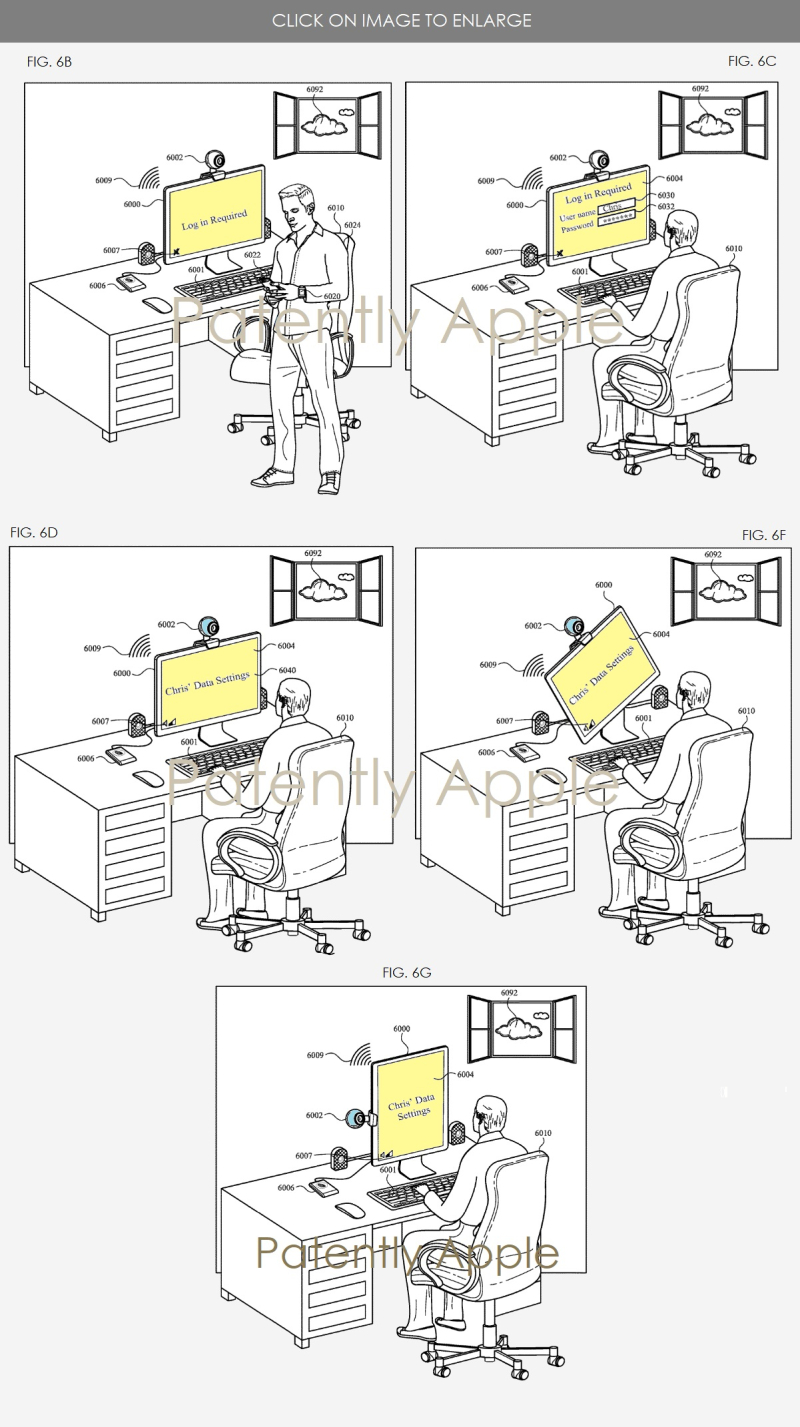 In the second round of patent figures below we're able to see a second office worker "Sasha" going to the same desktop as the first worker above and having the display and desktop auto adjust accordingly to her preferences.

In patent FIG. 6K, we're able to see that the first worker "Chris" is signing off on his desktop preferences on his iPhone and confirms that Sasha is next to use the desktop.

The desktop then is able to use Face ID to recognize Sasha and automatically set up her desktop preferences different from those set by Chris. 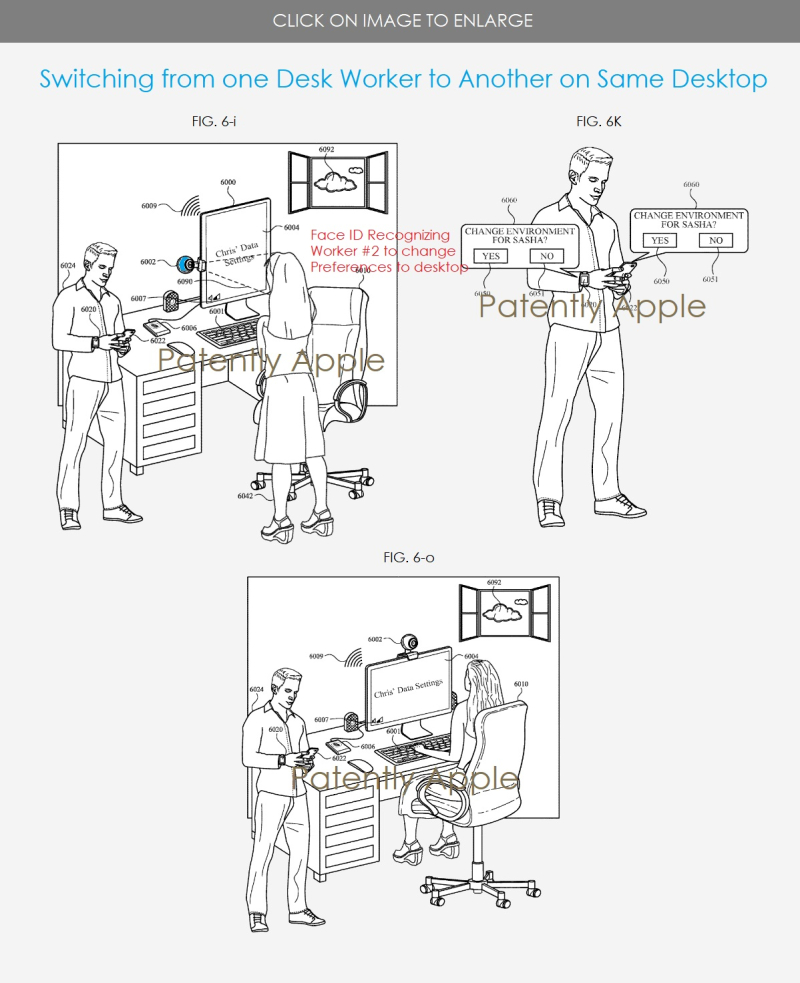 In the last round of patent figures below we're able to see that the desktop camera is able to make further adjustments to the display to always run optimally for the user. The patent figures show the office environment on cloudy and bright sunny days as well as in the evening portrayed with the moon in the window.

In addition, Apple notes that in patent FIG. 6R below, the moon is visible through the window and there is little ambient light. As a result, the screen is made darker to make for a more pleasant environment for Chris.

In another example, the volume of the desktop speakers could be lowered and/or raised based on the ambient noise. 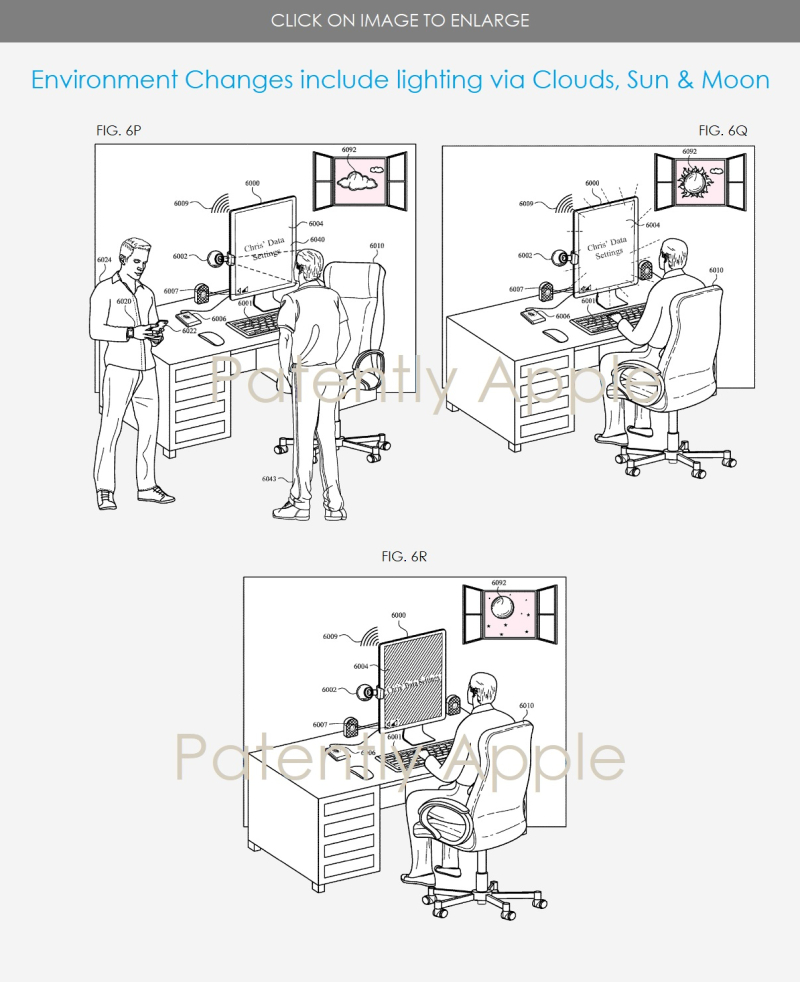 At the top of this report I pointed to Apple's Marcel Van OS being one of the inventors. The second inventor listed on this patent application is Richard R. Dellinger, Sr. UI Designer, iOS and OSX.