A Wild Rumor of a Samsung Folding Smartphone Predicts a 7.3" Display when Opened with an Additional Front Display

With Apple's iPhone event scheduled for September 12th, I'm finding it interesting that the reporting from South Korea about a possible folding smartphone from Samsung is escalating as if to discourage iPhone sales. Patently Apple posted a report on Tuesday outlining the confusion surrounding a folding phone from Samsung. Samsung Electronics has reportedly decided on the specifications of its upcoming foldable phone, an in-folding phone with an extra display outside, as noted in the patent figure below from a 2014 patent application. Of course the design could vary as Samsung has a great number of folding smartphone designs from simple to complex on record. 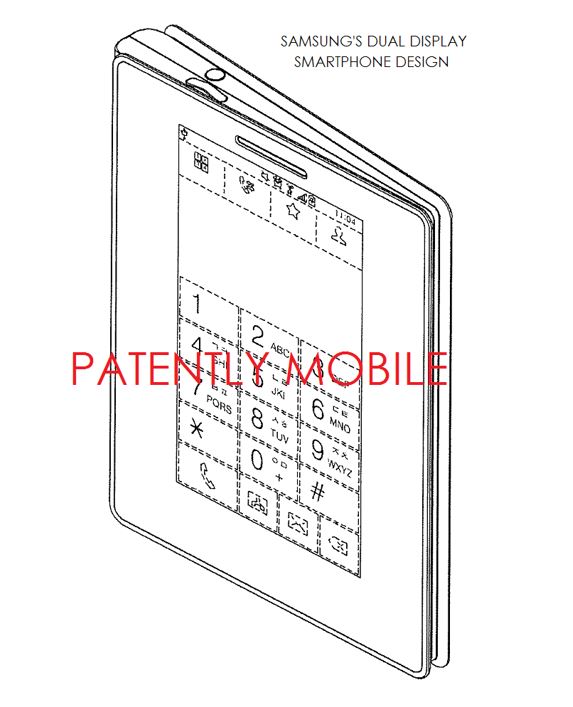 The phone being developed under project name Winner will feature a 7.3-inch OLED display when unfolded like a notebook. The display will have a 1.5R curvature, which means the display can be folded to wrap around a 1.5 millimeter-radius circle.

In order to boost the phone's usability even when folded, an extra 4.6-inch OLED display will be attached outside.

The supply volume and schedule of key parts have also been confirmed. Samsung Display, the sole display producer, is expected to start placing parts orders from October, with plans to produce a monthly 100,000 to 120,000 units of the foldable display.

Industry watchers are paying keen attention whether foldable phone could replace the market for tablet PCs and bring fresh breath into the stagnant smartphone market.

Along with Samsung, other Chinese smartphone makers like Huawei, Oppo and Xiaomi have started developing their own versions of a foldable phone. Samsung and Huawei, in particular, are competing head-on to earn the 'world's first' title.

In the meantime, sources predicted Samsung's foldable phone would be highly priced considering it uses two OLED screens and some parts that have never been mass-produced.

Will this latest folding smartphone/tablet actually surface in 2019 or is it another fantasy rumor?

While we await Samsung's first foldable smartphone to arrive with bated breath, Apple will be delivering a new round of iPhones next week that will savagely bury both Samsung's Galaxy S9+ and Note 9 during the holiday quarter. Oh, and by the way, that's a prediction that's actually going to happen.