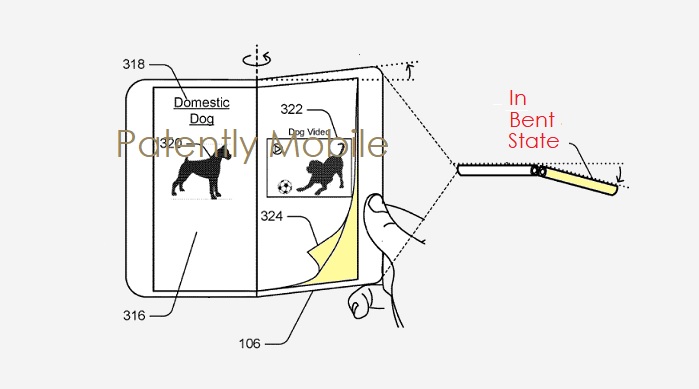 In mid-July Patently Apple posted a report titled "Microsoft's VP of Hardware makes it Absolutely Clear in a Recent Interview that a 'Surface Phone' isn't on their Roadmap." In that report we noted that Microsoft's VP Panos Panay failed to convince Wired magazine's reporter that they weren't working on new Surface device but rather a productivity device that could be used to communicate with others. Our report pointed to several Microsoft patents about a mini dual display device and our cover graphic was reportedly sanctioned by Microsoft. And yet a Surface Smartphone was shot down.

Last week the U.S. Patent & Trademark Office published yet another patent application from Microsoft that reveals a booklet-like device using dual displays that once again supports Microsoft's sanctioned graphics for such a device.

The patent application was more forthcoming in that it spelled out that the device could very well be a smartphone or folded tablet. Of course patents aren't written in stone and so a company can decide any point in time to delete, disregard or add whatever they wish to a patent. But at least we know that they did put it in writing that the device could be a phone without having to play word games.

With that said, Microsoft's many patents for a smartphone-like device are adding a series of new features to a future Surface device with a dual display that could easily distinguish itself from Apple's iPhone so as to avoid being slapped with a copycat label.

In last week's patent filing, Microsoft notes that mobile devices provide today's user with a variety of different functionalities, and in many instances allow the user to directly interact with objects displayed via touch-sensitive display devices. Devices having multiple display surfaces connected by a hinge, however, introduce complexities that are typically not resolved using conventional gesture input modalities. Such a device can include two portions of the device that each includes a display screen and which are connected by a physical hinge that can be manipulated by the user. In the context of a book or journal, for example, a user can view two pages in a way that resembles a paper book or a note book.

In an example, the user can use the hinged device to generate content, such as notes, journal entries, documents, and so on. Some users can generate volumes of content, such as by creating daily journal entries over many years. Some users may not organize their created content, and thus finding specific content within their created content can be challenging and time consuming. This can detract from user enjoyment and lead to user frustration when using these types of devices. This is what Microsoft's patent addresses.

Microsoft's invention relates to techniques for a navigational aid that is to be used with a hinged dual display device via semantic abstraction. Generally, the techniques described improve a user experience when the user is navigating through content, such as user-generated content in an electronic document.

Microsoft describes techniques for navigational aid for a hinged device via semantic abstraction designed to improve a user experience when the user is navigating through content, such as user-generated content in an electronic document.

In implementations, abstracted content includes abstracted pages wherein each represents a different section of the authored content. When a user scans through an electronic document, rather than scanning page by page, the user will instead be able to navigate through displays of the abstracted pages.

In addition, a hinge between different displays can be used as an input mechanism to control a speed of navigating through the abstracted pages to allow a user to more easily locate specific sections of the authored content. 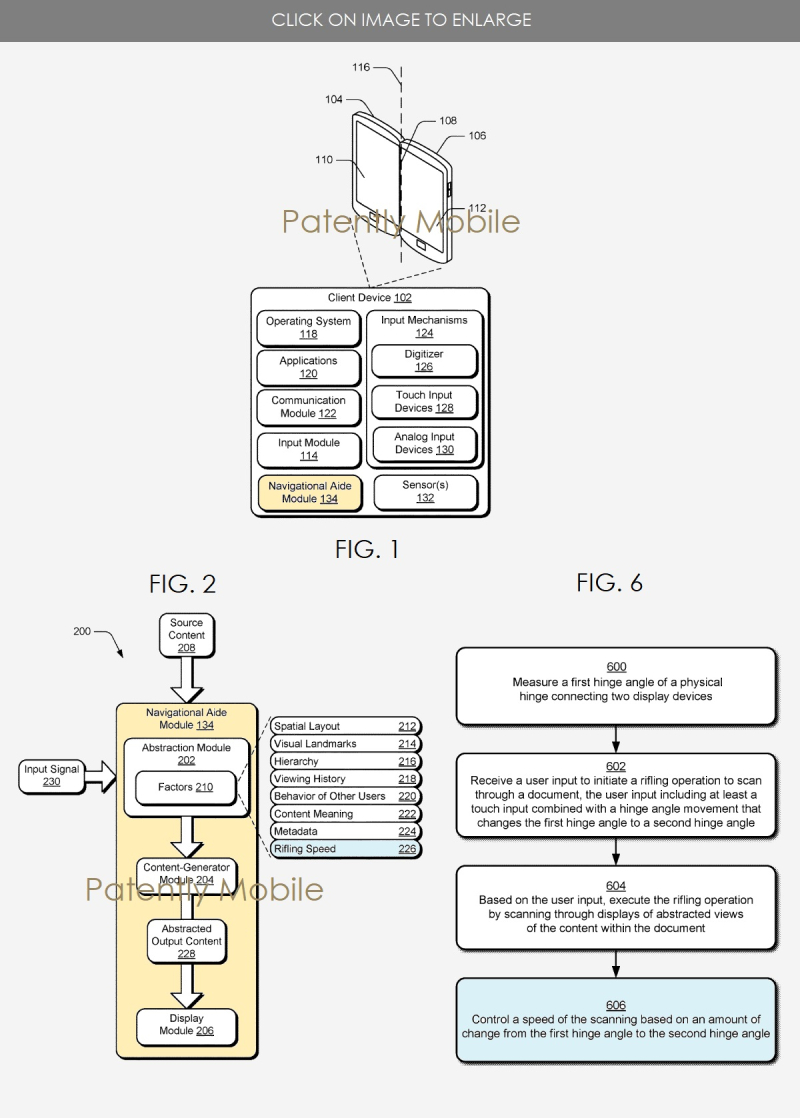 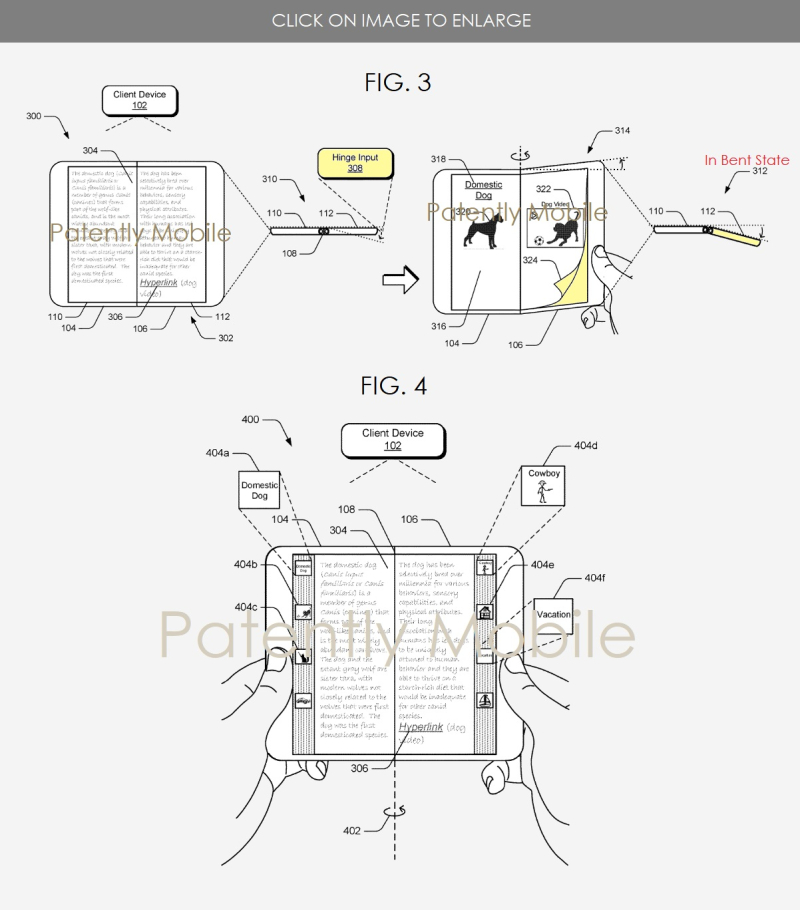 Microsoft notes in their filing that the device of FIG. 1 could be a mobile phone, a tablet computer, a wearable device or a handheld gaming device.

The applications #120 represent a web browser, web platform, or other application that can be leveraged to browse websites over a network.

The communication module #122 is representative of functionality for enabling the client device of FIG. 1 to communicate over wired and/or wireless connections.

The input signal #230 of FIG. 2 can be detected from a variety of different input mechanisms, such as a touch input or a stylus input to the touch surface or the touch surface of the client device, a press of a hardware button, a bend in the hinge #108 of the client device, a voice command via an audio sensor, or any combination of input mechanisms.

Unique to this mobile device is a new user interaction with the hinge #108 that can affect the rifling speed which in turn can affect a degree of granularity associated with abstracting the source content and/or a degree of abstraction relative to the source content. The bending hinge input is visualized on the right side of image in patent FIG. 3.

Instead of simply flipping through a document or book one page at a time, the right display slightly downward will trigger the middle hinge to turn the pages faster at a rate that depends on the pressure applied to the hinge when pulling the right display downward. Of course bending the hinge could apply to more objects beyond pages.

For instance, in Patent FIG. 2 we're able to see visual landmarks #214 refer to objects that appear within the content that may be visually interesting to the user. The visual landmarks can include a variety of different objects, such as headings, images, content clipped or linked from another source, multimedia (e.g., videos) embedded in a document, and so on.

The user may, for instance, be planning a trip and use an open web browser on the display device to clip content, similar to scrapbooking in the physical world, and then add the clipped content to the journal displayed via the display device.

In these examples, the visual landmarks can be weighted relatively higher than mere text, such that they are more likely to be included in the abstracted output content #228, in comparison to the text. Similarly, if the user enters text in a particular color, such as an entire paragraph in red (e.g., a color that is different than other text in the source content #208), then the text may be considered a visual landmark based on a combination of the text being red and a certain bulk of content that was created. Alternatively or additionally, text color may be considered a visual landmark if the color is known to convey a certain meaning (e.g., importance) within the source content.

The hierarchy factor #216 of FIG. 2 may refer to content that is interpreted as a section boundary. For instance, if the user underlines text that appears to be a heading, then that text can be interpreted as indicating that the user is essentially naming that particular section of content.

The underlined text may not explicitly be a chapter heading, but the underlining of the text may be considered a clue to how the content is being authored and organized.

Other examples include bolding, highlighting, or circling an object or text. This type of information can be used as useful labels to represent a particular section of content and essentially jog the user's memory as to the subject matter of that particular section.

Accordingly, to the extent that a hierarchy exists and/or is inferred, such as headings or bookmarks that the user has created, or objects that the user marked as a favorite using other features that exist within the system, this type of hierarchical information can be considered and essentially promoted to appear in the abstracted output content #228.

Another unique feature to this booklet styled device is that the user can set up custom chapters. The user can use a stock photo as a chapter marker of a custom pen input design or simple text as noted in patent FIG. 4 above. The chapters act like custom buttons. Click on one of the objects on the sides of a document as shown in FIG. 4 and go directly to that segment of a document or created video instantly.

At the end of the day we can only hope that whatever next-generation Surface device Microsoft is working on will get to market sooner rather than later. Shaking up the smartphone or tablet markets with a fresh round of new ideas will be healthy for the mobile industry as it will generate more sales by exciting consumers to upgrade quicker. Adding a half inch to a smartphone display size just isn't exciting as it once was.