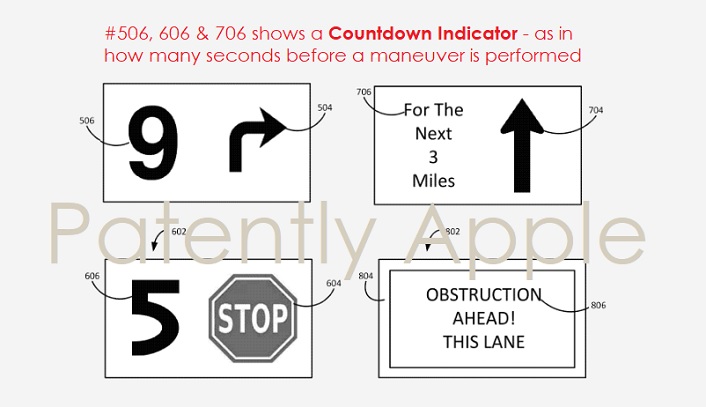 Today a newly granted patent not seen before, describes how a driver could put a car into autonomous mode and feel comfortable that the vehicle will communicate its intentions to both the driver and to others on the road such as the vehicle directly behind you. More specifically, Apple notes that aspects of the invention involve displaying an operational status of a system such as whether the vehicle is in manual control mode or autonomous control mode. More importantly, Apple introduces us to an all-new 'countdown indicator.' For example, the vehicle will communicate to the driver, passenger or vehicle behind you that your vehicle will be making a left turn in 9 seconds so that there's no surprised for anyone.

This information may be displayed such that an external observer to the vehicle may also determine what the near-future operation autonomous vehicle is about to perform.

It is often advantageous for systems and/or machines to provide some indication of an operational status or of an executing operation to users of the system. In a similar manner, providing an indication of the system to external observers may also be beneficial. For example, operators of vehicles often provide some indication of an intended maneuver of the vehicle, such as by initiating a turn signal before making a lane change. Such an indication alerts other nearby drivers or pedestrians to the intention of the driver of the vehicle such that the other nearby drivers and pedestrians may react accordingly. Further, many drivers provide other, more subtle cues as the intention of the driver while operating the vehicle that are viewed and considered by the other nearby drivers and pedestrians when reacting to the operation of the vehicle. For example, multiple views in a rearview mirror by a driver may indicate the driver intends on changing lanes, regardless of whether the driver uses a turn signal.

Invention: System and Method for Visual Communication of an Operational Status

Another implementation of the invention takes the form of a system for operating an autonomous vehicle. The system may include a non-transitory database storing one or more geographic maps of a region and a processing device in communication with the non-transitory database for calculating a route for the autonomous vehicle from a starting location to a destination location utilizing at least one geographic map of the region, the route comprising at least one operation control of the autonomous vehicle corresponding to a next step in the calculated route.

The system may also include a geographic position system (GPS) locator in communication with the processing device, the processing device further utilizing the GPS locator to calculate an estimated time to the next step in the calculated route based at least on a current geographic location of the GPS locator and a display system displaying an indicator of the next step in the calculated route on an external surface prior to executing the at least one operation control of the autonomous vehicle. 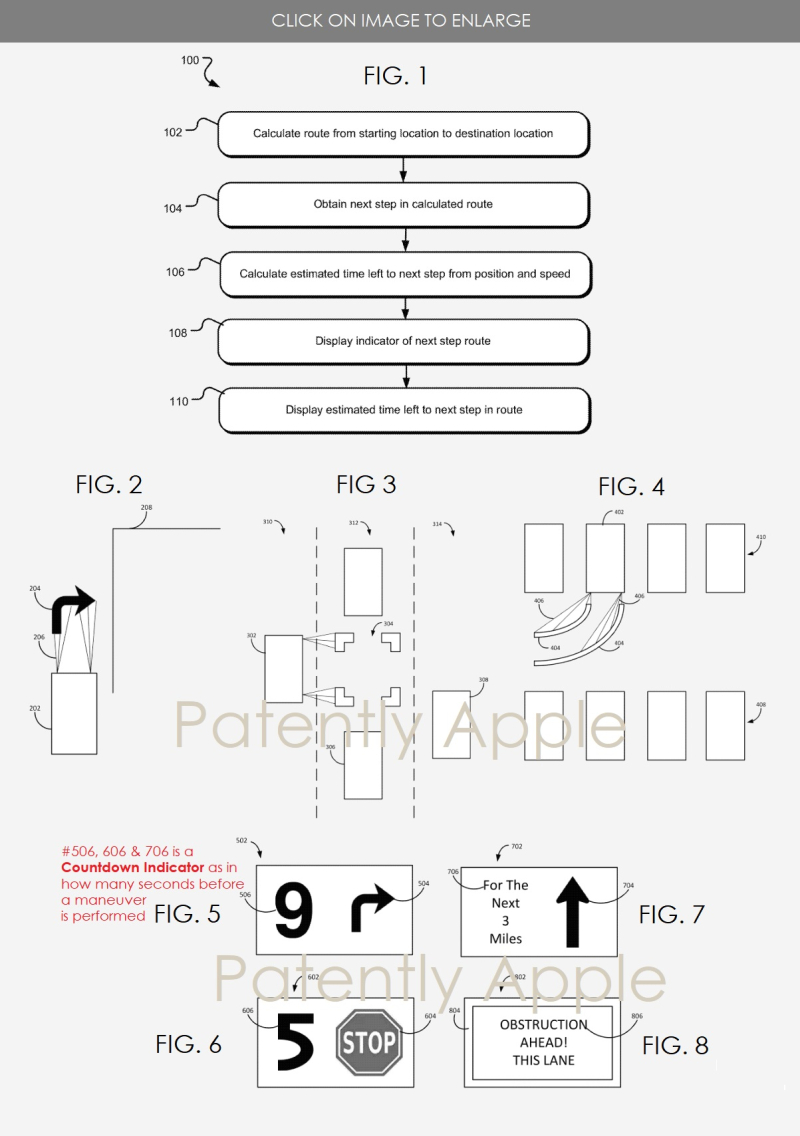 The Countdown Indicator for Passengers and Other Drivers

Apple's new 'Countdown Indicator' noted in the patent figure graphic is unique and deserves a little more detail as follows:

For example, as the vehicle nears the location of the next step of the route such as a left turn, the display may provide a countdown until the autonomous vehicle executes the left turn. The countdown and other displayed information may aid one or more external observers to the vehicle in determining or anticipating the operation or movement of the vehicle. Such information may make the observer comfortable with the vehicle being driven autonomously.

In another implementation, the route may also include information about the series of steps the vehicle may perform to travel the route, such as which directions the vehicle turns and/or travels (such as "left turn", "right turn", "U-turn", "north", "south", etc.), lane information such as which lane the vehicle should be in to perform the next step in the series of steps of the route, localized information of the area around the roads of the route (such as local businesses and services), an estimated time to traverse the initial route, an estimated time of arrival, alternate routes and estimated times to traverse the alternate routes, and the like.

Further, in one or more implementations, the vehicle may receive traffic information for roads along the initial and/or alternate routes and utilize the information when estimating the time of arrival.

For those wanting to understand this system a little deeper, check out granted patent 10,053,001 here.