Today Patently Apple covered Apple's higher profile patent applications covering 3D Fingerprint scanning under a display and Apple Pay's secure element to be used in future ePassport app. But there were a few other patent applications and 'continuation patents' worth noting.

In one patent that we originally covered back in April focused on new smart connectors. Today the U.S. Patent and Trademark Office published Apple's "continuation patent" 20180226747 that updated the original patent.

In Apple's initial or parent patent, they focused the claims on a "magnetically actuated connector which included multiple floating contacts" as noted in our cover graphic.

In Apple's continuation patent Apple focuses on the connector having "a plurality of spring-biased pins arranged in a linear configuration."

Secondly, Apple places a particular focus on a Keyboard accessory that would use this new magnetic connector in their patent claims.

Spring-biased pins are presented in patent FIGS. 6A to 6C below showing cross-sectional side views of pogo pins with integrated movable magnets. 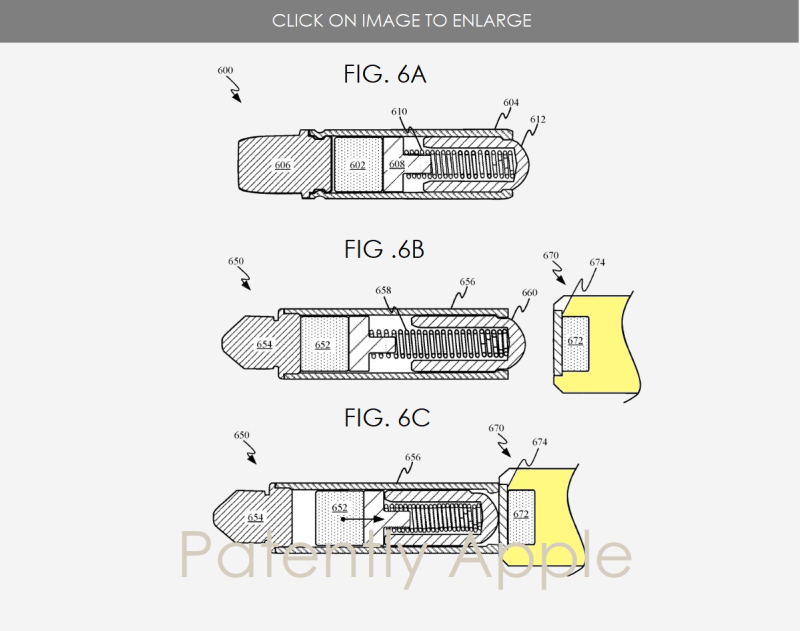 Apple's patent overview had noted that "A wide variety of accessory devices can benefit from such a connector including but not limited to a powered cover or case, an external battery pack enclosure, an external keyboard, a stylus, a wireless headset or earbuds, a docking station and the like."

On a Mill-Max page talking about pogo pin applications, they present what you see in the graphic below regarding a perfect solution for charging batteries in portable devices.

Another patent application worth noting today for fans of wireless technology is one that covers hybrid 5G/LTE dual connectivity that you can review here. As Apple prepares for their first generation of 5G iPhones, this technology may play a role in the not-too-distant future.