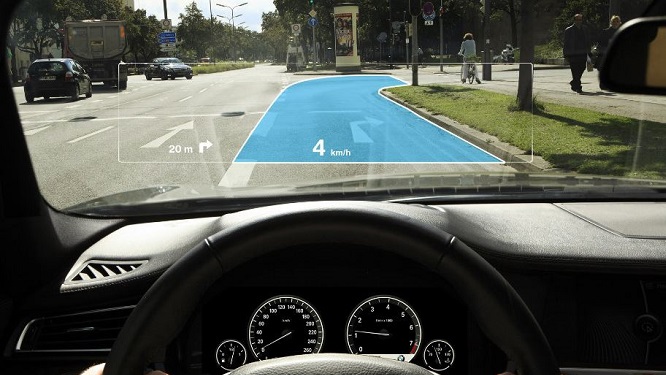 Over the last eight months a wide range of patent applications covering autonomous vehicles have come to light, with many of them discovered in Europe. In that time frame we also learned that Apple is working with Volkswagen on an autonomous vehicle. Earlier today Patently Apple discovered yet another European Patent application from Apple that was published on Wednesday August 1, 2018.

The detailed patent covers a future augmented reality windshield system which also is known as a Heads up Display. Apple describes every aspect of their AR display system in painstaking detail. It even describes occupants of an autonomous vehicle having a FaceTime session between different vehicles. The system will even be able to detect and make adjustments so that a panicky occupant could remain calmer in the autonomous vehicle.

In Apple's patent FIG. 1 below we're able to see an illustrated vehicle that includes a vehicle navigation system (VNS) #140. In some embodiments, the VNS can autonomously control one or more vehicle control elements #150 to cause the vehicle #110 to be autonomously navigated along one or more driving routes through the environment #100.

In some embodiments, the VNS controls the display of information to one or more occupants of the vehicle via one or more interfaces #130. 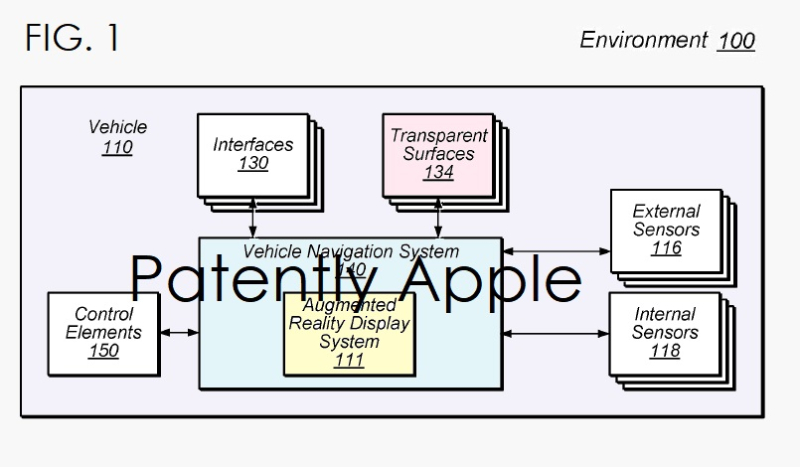 External Sensors: Apple notes that the vehicle includes one or more sets of external sensors #116 which generate sensor data representations of one or more portions of the external environment.

In some embodiments, the VNS generates and maintains a world model based at least in part upon information received from a remote service, system, device, etc. via one or more communication networks.

A Limited Example of the Augmented Reality Display

Apple's patent FIGS. 2A and 2B presented below (in a limited way) illustrate a vehicle comprising a transparent surface which provides an augmented reality display which includes a spatially positioned representation of a speed of the vehicle relative to a local speed limit. 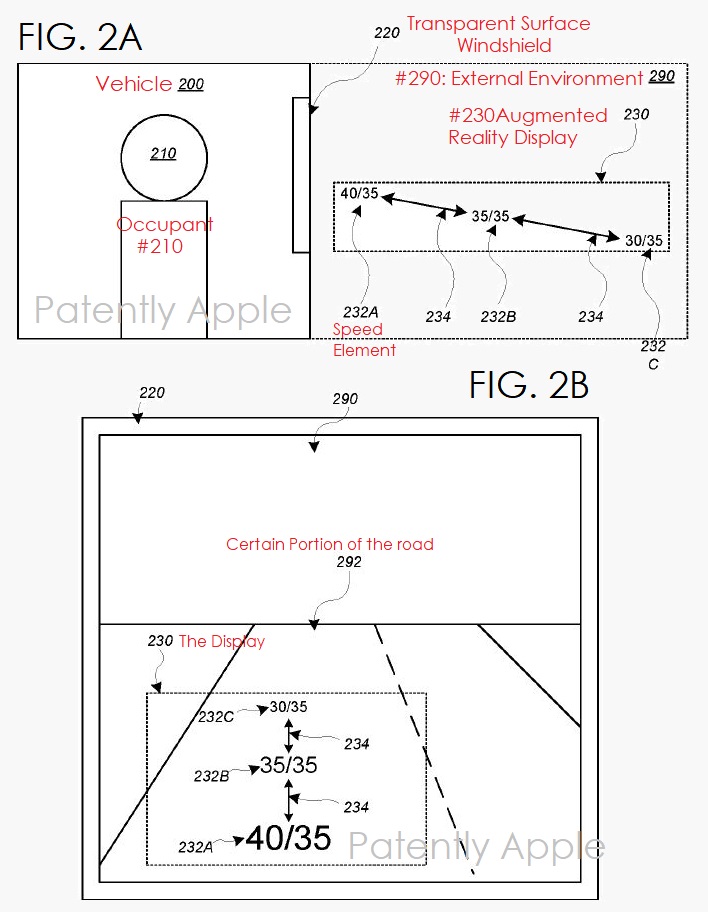 In some embodiments, an augmented reality display provided to an occupant of a vehicle, via being displayed on one or more transparent surfaces of the vehicle, includes a display element which provides a three-dimensional representation of a speed of the vehicle where representation of the speed is spatially positioned, in the environment, based on a difference between the vehicle speed and a local speed limit.

The example shows a driver #210 looking through an AR windshield could see what speed they're driving and what the actual speed limit is so that the driver is informed if the vehicle is traveling at lawful speeds.

The virtual display is designed to follow the road at all times so that the driver's AR screen elements are properly centered to the road ahead of the driver at all times.

Another feature buried in the patent filing that Apple is working on involves FaceTime between vehicle occupants and another vehicle. Apple specifically notes that "In some embodiments, an augmented reality display system included in a vehicle enables visual communication between an occupant of the vehicle and a remotely located user, including an occupant of a separate vehicle."

Two weeks ago Patently Apple posted a report about a 'Personal Driving Profile' system for autonomous vehicles that touched on "Monitoring Occupant Stress Levels and Making Adjustments." Today's patent likewise touches on this aspect of drivers and passengers experiencing stress while an autonomous vehicle is in action. 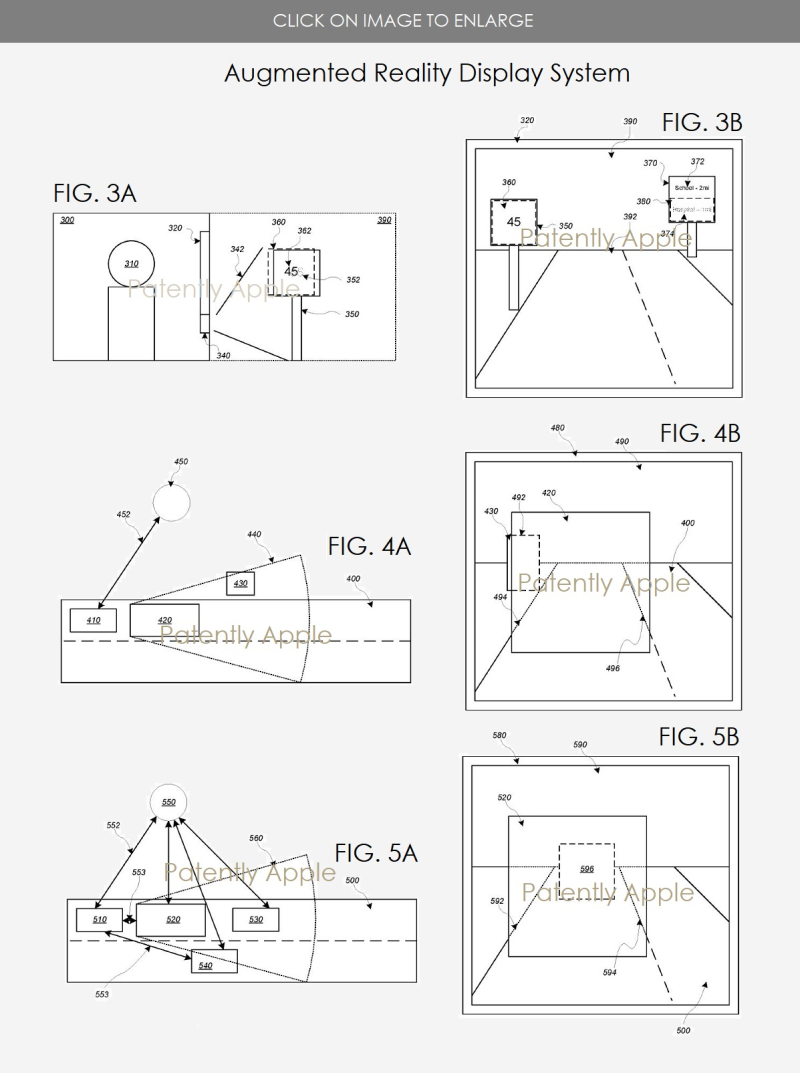 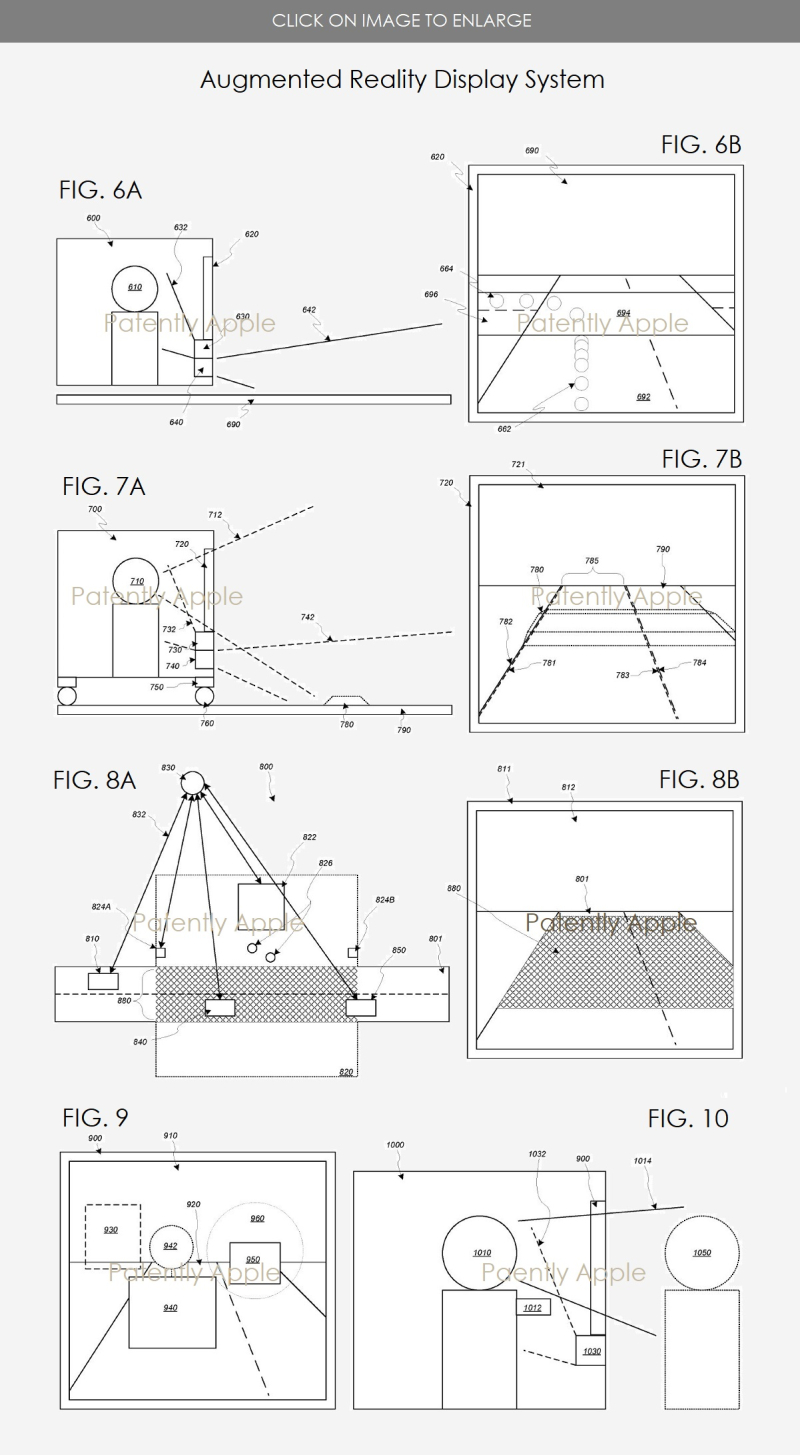