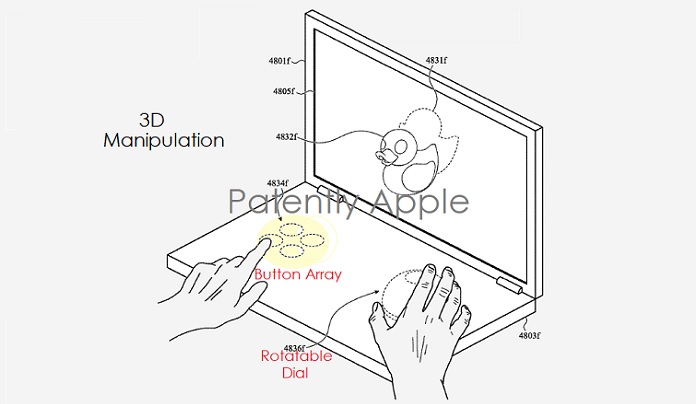 Apple has filed a number of patent applications over the years that cover various aspects of their project involving virtual keyboards for the iMac and unique MacBook Pro designs that introduce dual displays that could accommodate virtual keyboards and other interfaces (one, two, three, four and five). Apple was granted their first patent for a dual display MacBook in February.

Apple's competitor Lenovo beat Apple to market with a dual display notebook and in June they revealed at Computex that their next version of the Yoga Book would include virtual keyboards driven by AI in order to make the feel of a virtual keyboard closer to a manual keyboard.

Apple notes that the base portion of the virtual keyboard area is configured to receive various types of user inputs, such as keyboard inputs (e.g., typing), touch inputs (e.g., gestures, multi-touch inputs, swipes, taps, etc.), and the like.

Apple first introduced "Swipe Gestures" on a virtual keyboard back in a 2017 Apple patent with the patent figure shown below. 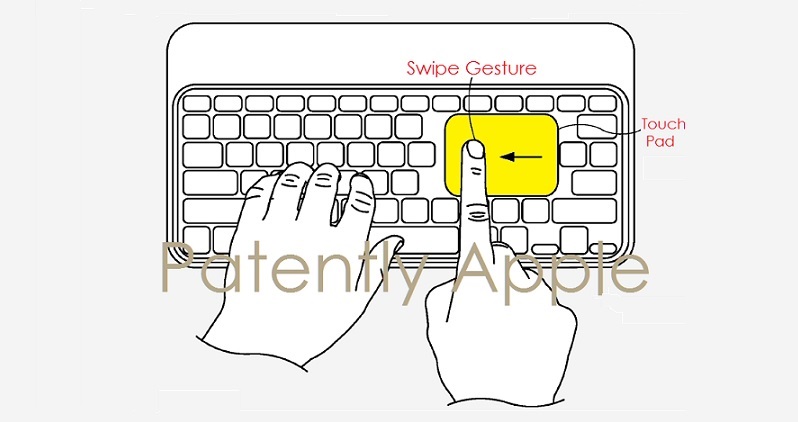 In today's patent, Apple illustrates the swipe gesture again in patent figure 48A shown below. The virtual keyboard could also accept traditional iOS gestures such as pinch and zoom and more. 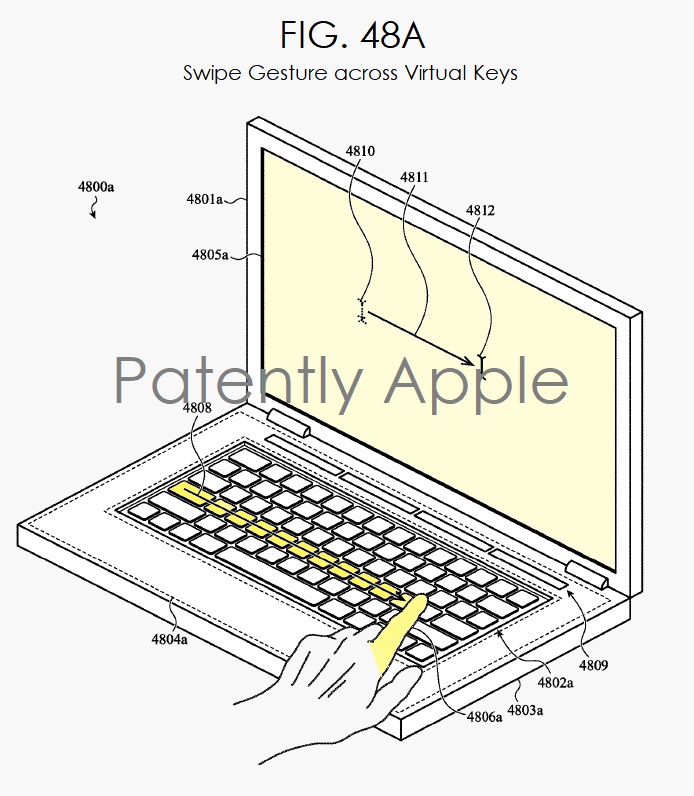 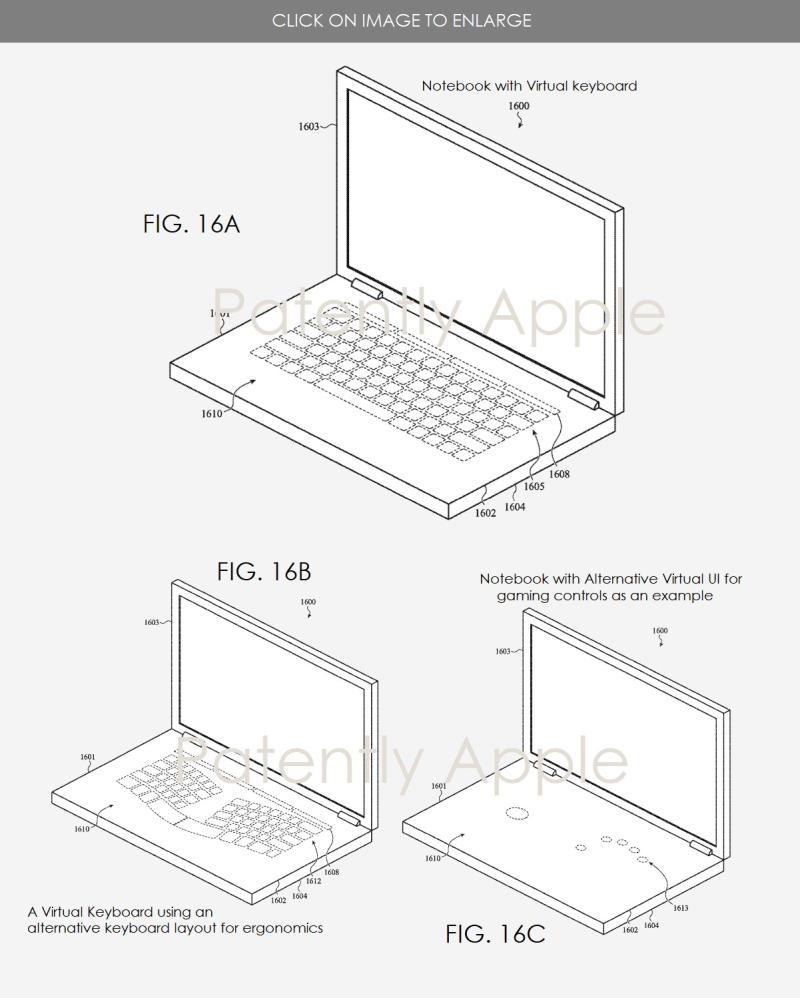 Apple notes that the base portion and the keys may be a monolithic component, such as a molded silicone accessory. In some cases, the material may deform under a typical typing force to provide a tactile feedback or sensation of typing on a mechanical or movable keycap. Alternatively, the material may not deform under typical typing pressures, and the keys may simply provide raised, nonmoving key pads for a user to strike during typing. 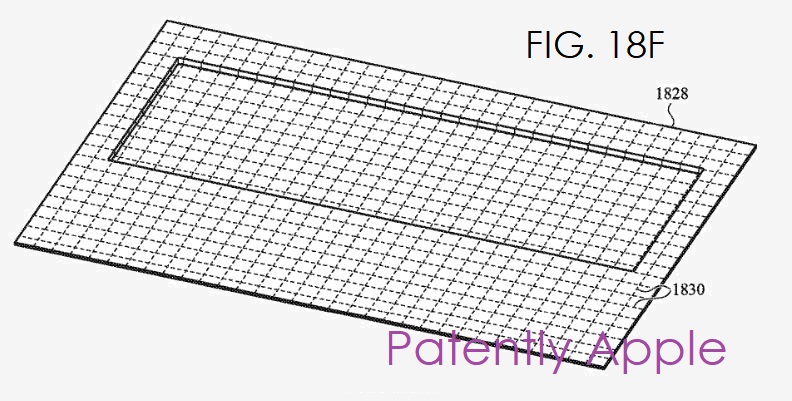 Where the top case 1828 is transparent, such as when it is used in conjunction with one or more displays to produce virtual keys or other images on the top case, the conductive traces may be transparent or substantially transparent. 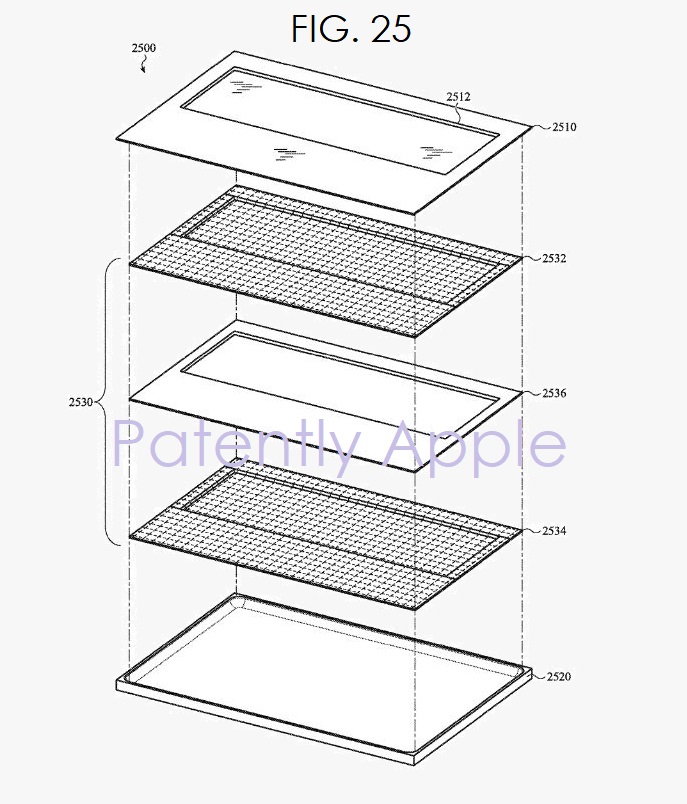 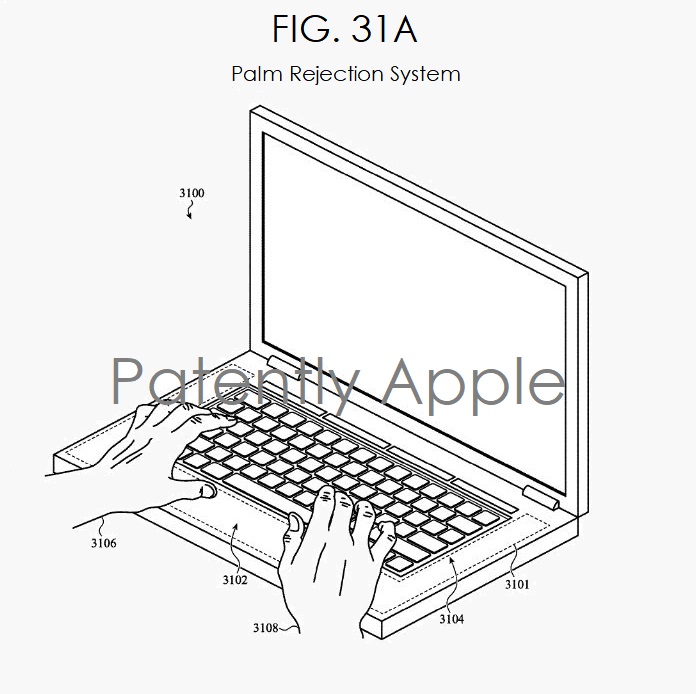 When in 'typing mode' a palm rejection system automatically kicks in. Apple's patent FIG. 31A above illustrates a scenario where a user is typing while the user's hands are resting on the trackpad region #3102. In this case, palm-rejection techniques are used to ignore the force of the user's hands on the trackpad region while detecting force inputs applied to the keyboard.

Spell Correct: With a virtual keyboard new functions or feature could be introduced. Apple explains patent FIG. 48 below by noting that key 4844e (shown as a space bar) may be capable of receiving traditional key inputs as well as gesture inputs. 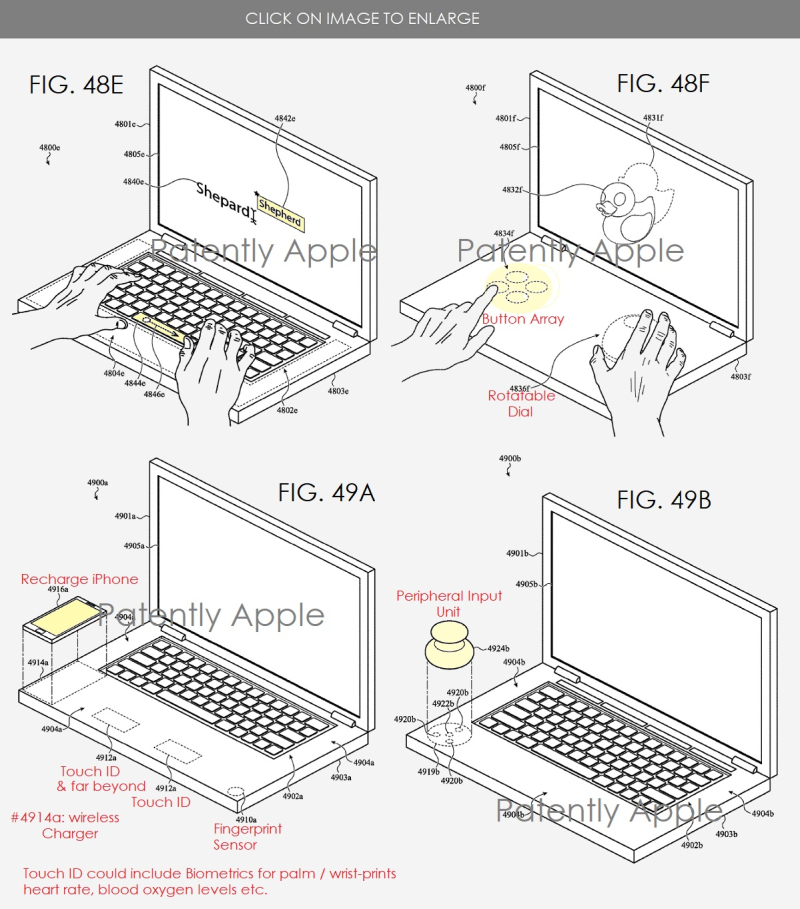 In Apple's patent FIG. 48F above we're able to see the display #4805f showing a three dimensional model of an object, and the affordances may be used to manipulate the view of the object. For example, a user selection of a button in the button array #4834f, as shown in FIG. 48F, may cause the computing device 4800f to interpret an input to the rotatable dial 4836f in one of various possible ways.

More particularly, the buttons of the button array 4834f may determine whether inputs to the rotatable dial 4836f cause the three dimensional model to rotate horizontally, rotate vertically, be zoomed in or out, or the like.

I'm sure Microsoft's Surface team will see this as a Surface Dial rip-off. But reality is that the Surface team ripped off Griffin's PowerMate for the Mac.

Such information may be used for authentication purposes, to determine the user's hand position relative to the device, and/or to record health data for the user to track.

As noted, the biometric sensors #4912a may also use any suitable sensing techniques, such as optical sensors (e.g., photoplethysmographs, cameras, etc.), capacitive sensors, or the like. The biometric sensors may also include facial-recognition sensors, which may include cameras, lenses, projectors (e.g., microdot projectors), infrared sensors, and the like, which may also communicate through the top case to provide facial recognition functionality. Of course Apple is describing Face ID technology.

And lastly, Apple's patent FIG. 49B. According to Apple, the notebook #4900b may include in the base portion #4903b a connection region #4919b, which may be configured to receive thereon a peripheral input unit #4924b (or any other suitable electronic device). As shown, the peripheral input unit #4924b is a joystick that may be used, for example, to manipulate displays of three dimensional objects, provide input for gaming applications, navigate user interfaces, or the like.