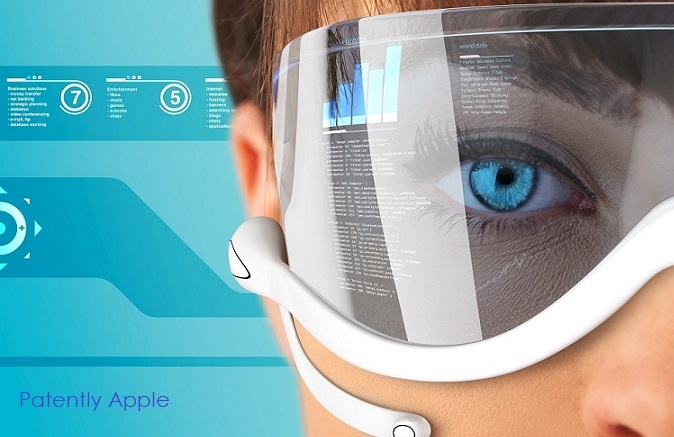 In late February Patently Apple posted a report titled "A Euro Patent Reveals Apple is working on an 8K Foveated Micro-Display for a Head-up Display, iDevice and beyond." Apple is in a race of sorts with Qualcomm their mortal enemy regarding the creation of a platform supporting AR Glasses and Heads-up Display systems. Apple's first patent filing for a Foveated Display described using "micro-displays" and a gaze control system. This week a second Foveated Display patent application was published in Europe with greater detail surrounding the system and a tiny admission that the high-end display will be used for gaming applications.

Displays may be incorporated into devices such as head-mounted devices and/or AR glasses and the like. It may be desirable to provide users with immersive content using the display. For example, it may be desirable for a user's entire field-of-view to be filled with content on a display.

Apple notes in their patent background that "If care is not taken, however, images viewed by a user will not be satisfactory. High-resolution images may require excessive bandwidth and may therefore be difficult or impossible to display effectively at satisfactory frame rates. The bandwidth used in conveying image data to a display may be reduced by lowering image resolution, but excessively reduced image resolution may degrade image quality more than desired." This is where Apple's invention steps into the picture.

The focus of the invention is delivering a foveated display for AR Glasses and/or a head-mounted display so that a user's entire field-of-view could be filled with content on the display at the highest quality.

The second focus of the invention revolves around a gaze detection system that gathers information on a user's point of gaze on the display. Based on the point-of-gaze information, control circuitry in the electronic device may produce image data for an image with multiple resolutions. A full-resolution area of the image overlaps the point of gaze. Lower resolution image areas are located in peripheral regions of the image. 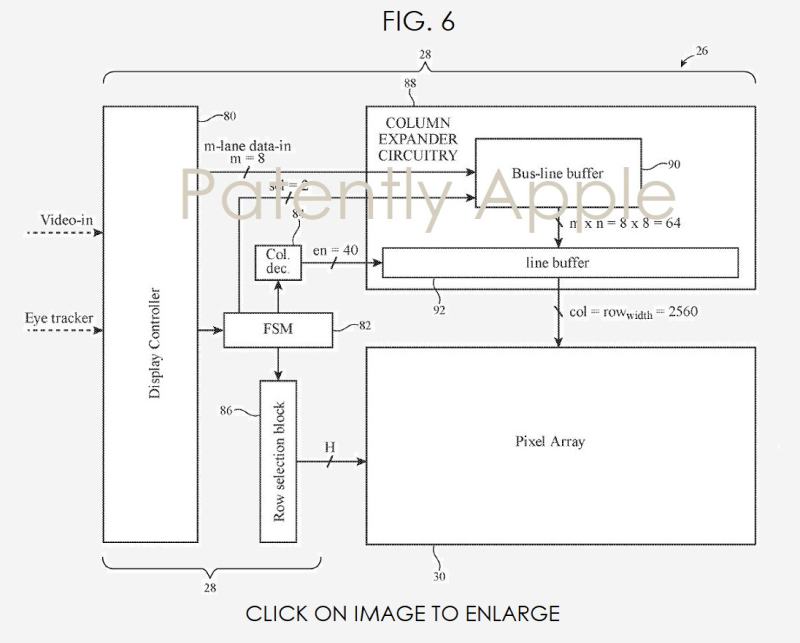 A schematic diagram of an illustrative head-mounted display or AR Glasses may be provided with a foveated display arrangement as shown in Apple's patent FIG. 1 below.

Apple later clarifies and describes that a head-mounted display is "a pair of augmented reality glasses that is worn on the head of a user may be used to provide a user with computer-generated content that is overlaid on top of real-world content."

More Details on the Point of Gaze System

In electronic devices such as head-mounted display devices, it may be desirable to display images for users over a wide angle of view. Displays that cover wide angles of view at high resolutions may consume relatively large amounts of image data and may therefore impose bandwidth burdens on electronic devices such as head-mounted displays. These bandwidth burdens may be reduced by using a display scheme in which high resolution images are displayed in alignment with the user's current point of gaze and in which low resolution images are displayed in the user's peripheral vision. Display schemes such as these may sometimes be referred to as foveated display schemes. 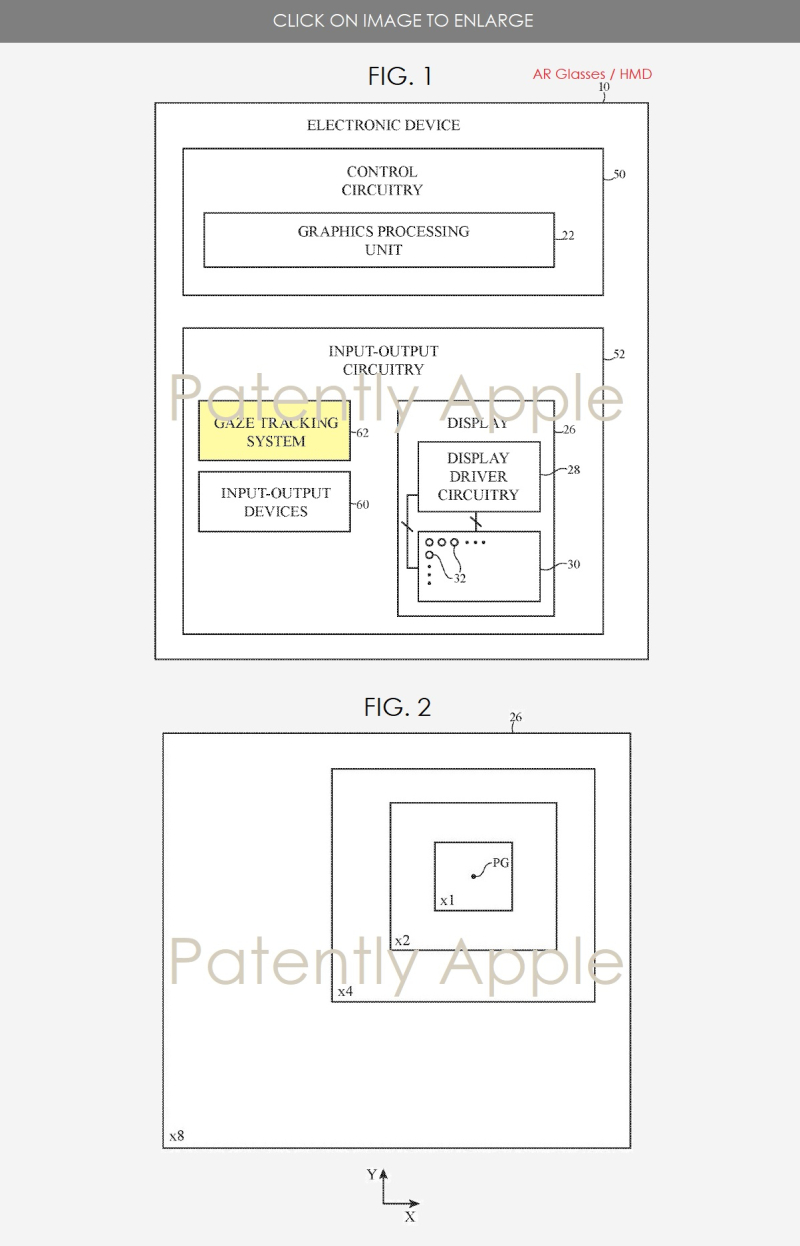 An illustrative example of a foveated image being displayed on pixel array #30 (FIG. 1) of display #26 is shown in FIG. 2. In the example of FIG. 2, the display has a rectangular outline. The size of the display may be selected to be sufficiently large to cover most or all of a user's field of view.

Based on gaze tracking information from gaze tracking system #62, graphics processing unit #22 may determine that a user's current point of gaze is located at the point of gaze PG (e.g., in the upper right corner of the display shown in the example of FIG. 2).

During the operations of block #70 of FIG. 3 below, the control circuitry may use gaze tracking system to gather information on the user's point-of-gaze. The point-of-gaze (see, e.g., point of gaze PG of FIG. 2) may be located at a particular coordinate (X,Y) on the display. As the user's gaze moves (e.g., to track on-screen objects on display 26), the location of point of gaze PG can be updated dynamically. 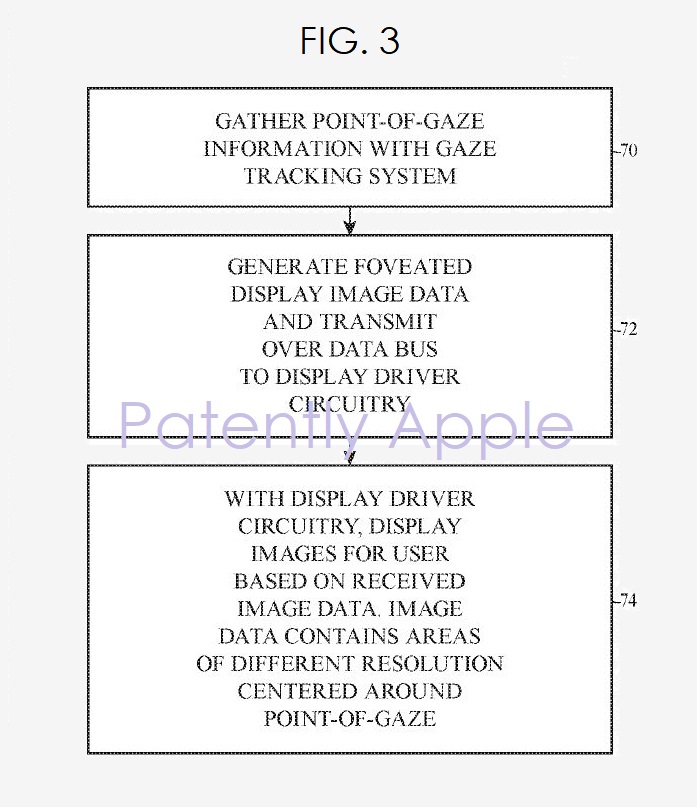 According to Apple, "A source of content (e.g., a computer program such as a game application or other application running on the control circuitry) may produce content for viewing on the display. To avoid overburdening the circuitry of the AR Glasses, the graphics processing unit may generate foveated display image data during the operations of block 72 of FIG. 3 above.

By rendering images with different resolutions in different areas, the amount of image data that is associated with the content to be displayed on the display can be significantly reduced (e.g., in comparison to rendering the entire image on display 26 at full resolution).

Apple's patent application was filed in Europe on January 18, 2018 and published on Thursday August 02, 2018. Considering that this is a patent application, the timing of such a product to market is unknown at this time.