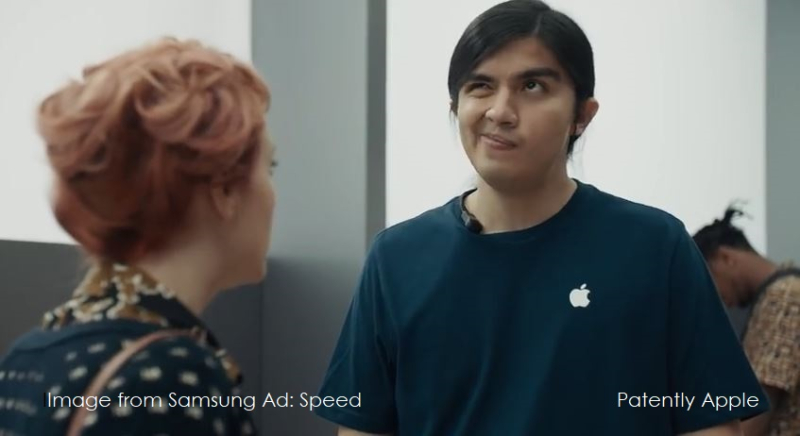 Last week we briefly touched on one of Samsung's new ads under their "Ingenious" line-up called "Speed." The report pointed out that every time Samsung's sales take a turn for the worse against Apple's iPhones, they go on the offensive by creating goofy ads that they think will push Apple fans to their camp.

Timed perfectly as an extension to the Samsung ads, Bloomberg has jumped in to make the download speed issue a big thing.

Bloomberg reports that "Apple's iPhone 8, iPhone 8 Plus and $1,000 iPhone X trail the latest smartphones from Samsung Electronics Co. and Alphabet Inc.'s Google in download speeds, according to data from Ookla LLC, a company that provides the most popular online service for measuring the speed of an internet connection with its Speedtest app and website. Faster internet data means that users can load websites and start watching movies more quickly, make crisper video calls and get higher-quality video.

If you paid top dollar for the iPhone X and Apple Inc.'s other flagship smartphones expecting the fastest mobile internet speeds around, you won't like these results.

The speed-test data, reviewed by Bloomberg, show that Samsung's Galaxy S9 phones had an average download speed -- across carriers in the U.S. -- of 38.9 megabits per second, based on about 102,000 tests over the past three months. The larger model, the S9+, delivered speeds of 38.4 Mbps, according to a sample size of about 169,000 phone connections. The iPhone X on average downloaded data at 29.7 Mbps, based on a 603,000 tests. The iPhone 8 Plus and iPhone 8 were close behind with speeds of 29.4 Mbps and 28.6 Mbps, respectively.

Ookla's insight into speed may become more of a factor in purchase decisions next year when the industry plans to start offering fifth generation, or 5G, services, which will be multiple times faster than what's currently available -- if the technology can translate theory into practice.

Companies that are able to provide phones on those networks earlier may grab market share. Apple has typically lagged behind on such moves, preferring to wait until standards are established and networks fully built out." For more read the full Bloomberg report here.

Side Note: I personally notice slow download speeds on my iPhone 6s even after taking advantage of Apple's battery exchange. In fact I think it's even slower now. On the flip side, I envy my wife's iPhone X for download speeds. I don't need lab test results to see that it's almost instant from the time I hit a link to the time it connects to a website. It's stunningly faster and I can't imagine anything being faster.

Perhaps Samsung should have had this feature advantage last year. Samsung's Galaxy S9 may be faster than the iPhone X as a set of numbers on paper, but your eye won't see the difference. So who cares?

Once again, Samsung's Galaxy S9 and S9+ sales have been terrible, so it's evident that even Samsung fans aren't buying into their silly ad campaign.