Home Archives Contact Us Subscribe Twitter MeWe Facebook Patently Mobile
An Apple Patent Discovered in Europe introduces us to a Unique Inductive Power Transfer Accessory for AirPower
Meet Hap Plain, the Man who owns the Most Apple Device Prototypes in the World 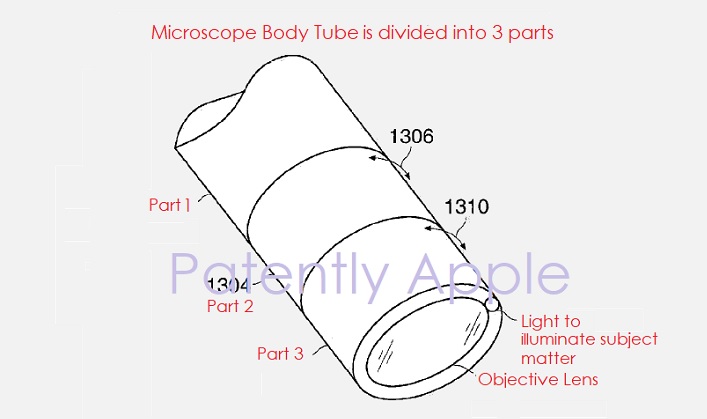 Earlier today Patently Apple posted a report titled "An Apple Patent Discovered in Europe introduces us to a Unique Inductive Power Transfer Accessory for AirPower." Within that same patent filing we noticed that Apple had buried another possible future accessory that could also be inductively charged: a microscope. Due to the length of the detailing of this microscope it was decided to run this as a separate report.

Apple's patent Figure 13A presented below shows us a portion of a body tube #1300 of a microscope. 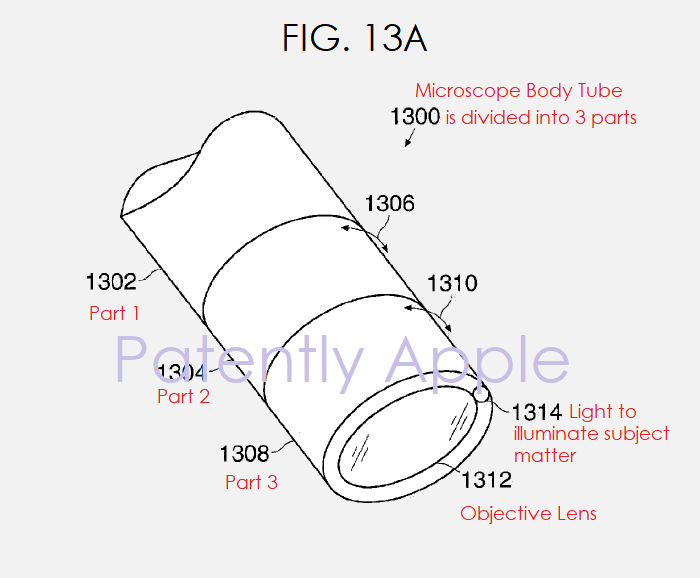 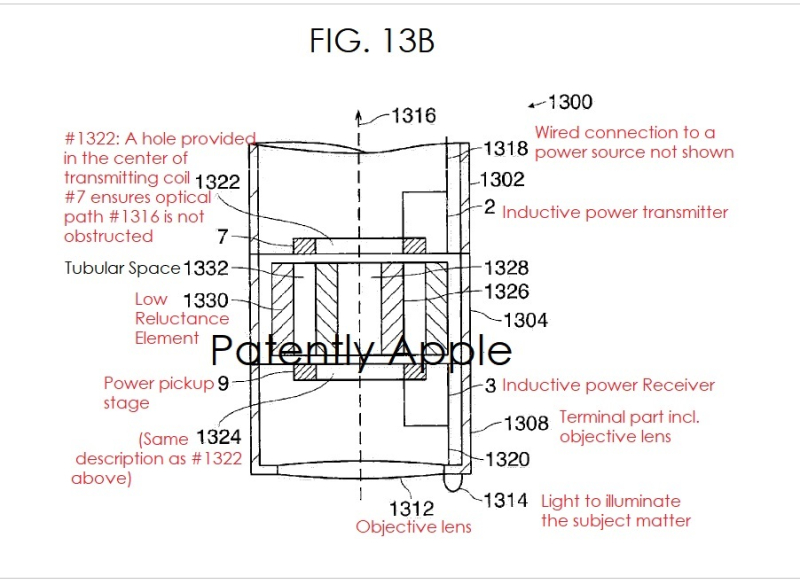 Apple's patent figure 13B illustrated above shows us a vertical cross-section through the center of body tube #1300 of figure 13A. The body tube includes fixed part #1302, intermediary part #1304 and terminal part #1308. As indicated by a dashed arrow, an optical path #1316 is provided from objective lens #1312 to the remainder of the microscope (not shown).

So that the subject matter of the present invention can be more clearly illustrated, Figure 13B is a simplified representation of the body tube, and therefore it does not show the mechanics of the focusing mechanism or other elements that may be included in the body tube, e.g., further lenses.

The fixed part #1302 includes an inductive power transmitter #2 (represented by a block) with a wired connection #1318 to a power source (not shown).

The inductive power transmitter includes a transmitting coil #7, concentric with the cylinder of body tube. The hole (#1322) provided in the center of the transmitting coil ensures the optical path isn't obstructed. The hole may also provide space for further optical elements, such as a lens. As will be appreciated, some parts of inductive power transmitter may be relocated to another part of the microscope due to size constraints or other considerations.

The terminal part #1308 includes an inductive power receiver #3 (represented by a block) with a wired connection #1320 to a light #1312. The inductive power receiver includes a power pickup stage #9 shown as a receiving coil, concentric with the cylinder of the body tube. The hole provided in the center of the receiving coil ensures optical path #1316 is not obstructed. The hole may also provide space for further optical elements, such as a lens.

Posted by Jack Purcher on July 07, 2018 at 10:24 AM in 1A. Patent Applications, Apple Accessories, Wireless Charging, Wireless technology | Permalink | Comments (0)