Apple Announcing AirPower too ahead of time was a Mistake

Apple's late CEO Steve Jobs only announced products that were about to be released. There was never an announcement of product coming 10 or 12 months down the road like Apple's Wireless charging pad 'AirPower.' Apple announced their upcoming AirPower during their iPhone X event last September. Since then there have been rumors of AirPower coming in March and others that it could arrive at the WWDC event. In both cases it was a no-show.

A new report by Bloomberg states that "This accessory is taking longer to make due to a series of technical hurdles, slowing the company's wireless strategy and highlighting supply-chain challenges that have hampered product launches in recent years.

Company engineers have been toiling away to address problems. One challenge is making sure the charger doesn't overheat. Another is the complexity of the circuitry, according to people familiar with the device's development."

In respect to overheating, one of Apple's patents regarding this issue surfaced. It was an original 'Power by Proxi' patent. Our April 2018 patent report noted that "While there are several methods that safeguard against heating up an object accidentally on the charging pad like car keys, PowerbyProxi's invention provides their own based on an inductive power transmitter comprising at least one power transmitting coil configured to generate an inductive power transfer (IPT) field, and an object detection (OD) system configured to detect the presence of an object based on a change in energy decay or change in resonant frequency of a resonant circuit integrated with or coupled to the transmitting coil."

The Bloomberg further noted that "Unlike wireless chargers on the market today, the AirPower is designed to charge three devices simultaneously: an iPhone, Apple Watch, and AirPods with a still-to-be-released wireless charging case."

Apple's patent covering their upcoming AirPods wireless case charging on an AirPower pad was covered in one of our March 8th patent reports with the patent figures presented below. 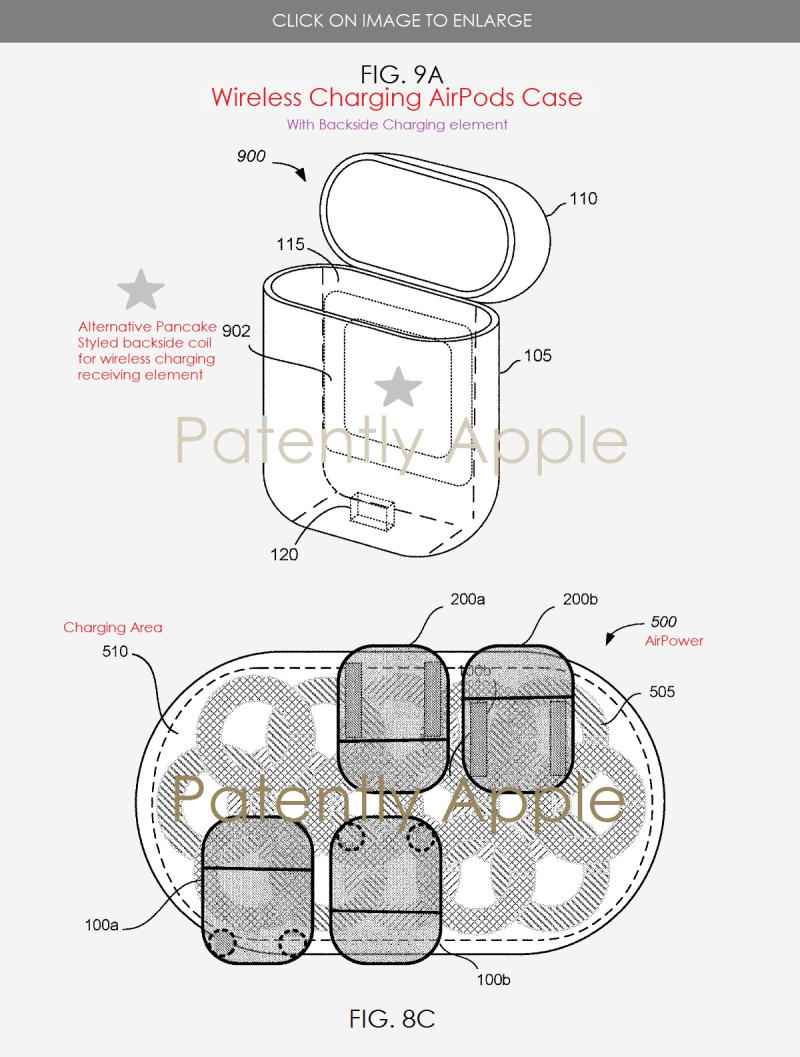 Bloomberg's Mark Gurman added that "Apple also wants users to be able to place any of their devices anywhere on the charging mat to begin a charge. That ambitious goal requires the company to pack the AirPower with multiple charging sensors, a process that has proven difficult, the people said.

The AirPower charger is also more advanced than the current competition because it includes a custom Apple chip running a stripped down version of the iOS mobile operating system to conduct on-device power management and pairing with devices. Apple engineers have also been working to squash bugs related to the on-board firmware, according to the people familiar." Bloomberg believes AirPower is likely to launch in September. For more on this, read the full Bloomberg report here.

At the end of the day, let's hope that Tim Cook and company will return to the Steve Jobs policy of not announcing products before a known shipping date has been confirmed by their suppliers.