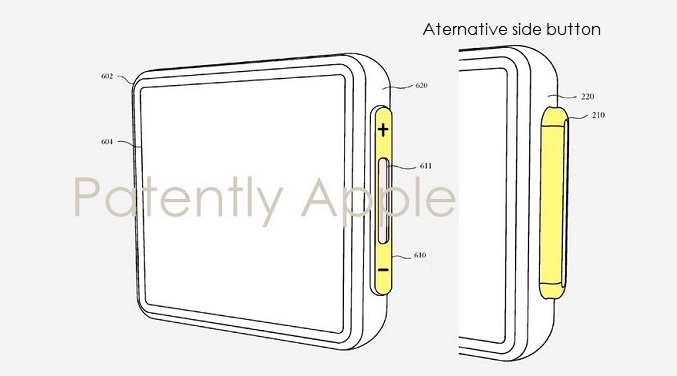 In March Patently Apple reported on a new side button for Apple Watch that users could press downward on in addition to being able to swipe across its surface to control volume, pull down a menu that could technically replace the digital crown and provide superior water resistance. A new rumor surfacing now supports this new side button invention.

According to a rumor published on Fast Company Friday. The report noted that "The Apple Watch will be getting solid state buttons that don't move up and down but rather sense the touch of a finger, a source with direct knowledge of Apple's plans tells Fast Company.

Apple will stick with the Watch's current button configuration, with a button and a digital crown situated on one side of the device, but neither will physically click as before. Rather than reacting to the user's touch by physically moving back and forth, the new buttons will vibrate slightly under the fingertip, using the haptic effect Apple calls the Taptic Engine. (The digital crown will still physically rotate to navigate through content.)"

The latter point may support a patent application that came to light in January that described "force touch" being added to the digital crown. Fast Company added that "The new buttons could be part of the new Apple Watch the company will announce this fall, or, if not, will be included in the 2019 Watch, the source said.

Solid-state buttons will make the Watch more water resistant because the opening needed for a physical button is eliminated."