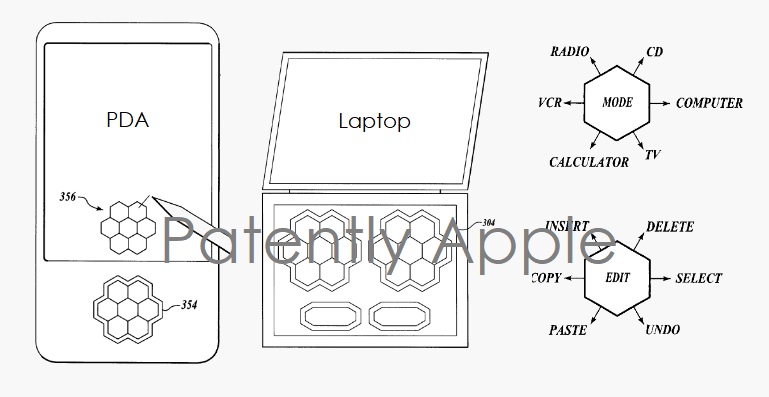 An inventor by the name of Mr. Toshiyasu Abe residing in Vancouver, Washington was granted a patent back in 2003 titled "Keyboard." The patent relates to using key flicks, a method used on most iDevice QuickType keyboards. The court filing notes that Mr. Abe contacted Apple on several occasions to point out that they were infringing on his patent. Apple, according to the filing, has since willfully infringed on his patent by advancing flick keys in iOS 11.

The patent figures that are found in our cover graphic are directly from Mr. Abe's patent. They don't relate to Apple's implementation of QuickType in any shape or form. It's not a fixed physical keyboard on an iPhone nor does it replace a MacBook's physical keyboard as the patent figures illustrate. The patent claims call for round or hexagon keys that have specific functions such as switch to "Radio, VCR or TV," or word processing functions such as "Copy, Paste or Undo." Yet somewhere in the patent's 64 patent claims Mr. Abe believes that Apple has infringed on his invention.

The formal complaint before the court states that "Mr. Abe has been an entrepreneur and inventor for nearly his entire life. In the early 2000s, Mr. Abe dedicated substantial time and resources into developing, promoting, and protecting the then-novel user interface device claimed in United States Patent No. 6,520,699, titled 'KEYBOARD' (the "'699 patent").

Apple has also implemented Mr. Abe's patented technology on at least its iPads and iPhones in the United States, as well as in other countries. The subject matter of the '699 patent has particularly gained popularity in Japan, where it is widely used and known as 'Flick Input.' Flick-style iPhone keyboards are also available for download and/or purchase through Apple's online App Store."

Apple's Willful Infringement of the '699 Patent

Mr. Abe's lawyers further note that "Apple has known of Mr. Abe's '699 patent since at least as early as 2009. Despite that knowledge, Apple has continued its unauthorized infringing activities. In 2009, Mr. Abe gave written notice to Apple of its infringement of the '699 patent. Mr. Abe attempted to engage in good faith negotiations with Apple regarding its unauthorized use of the '699 patent, including exchanging a number of emails and engaging in at least one telephonic discussion with Apple's in-house counsel at that time. However, the parties were unable to reach an agreement.

Since then, Apple has continued to willfully, wantonly, and deliberately infringe the '699 patent—both directly and indirectly. Then, in 2017, Mr. Abe discovered an increase in Apple's infringing activities relating to the release of iOS 11, prompting Mr. Abe to send Apple another patent infringement notification letter, dated December 27, 2017. The December 27, 2017 letter identified Apple's infringing products generally as iPads and iPhones, and included a representative claim chart showing an element-by-element analysis of Apple's infringement of the '699 patent. Apple acknowledged receipt of the letter on January 8, 2018. Again, Mr. Abe attempted to engage in good faith negotiations with Apple, this time through counsel.

Specifically, the parties exchanged several written communications by email and regular mail, and held telephonic meetings on February 20, 2018 as an introductory phone call, and then on March 28, 2018 to discuss Apple's potential licensing of Mr. Abe's '699 patent, as well as his Chinese patent. Responsive to the questions that Apple raised during the March 28, 2018 phone call, Mr. Abe sent Apple a detailed response letter and additional claim chart on April 9, 2018, explaining how the claims of the '699 patent read on the Apple's infringing iPads and iPhones. Mr. Abe requested that Apple respond by April 27, 2018 as to further the licensing discussions between the parties. Apple never responded.

Despite Mr. Abe's good faith efforts—first in 2009 and then again starting in 2017—Apple refused to license the '699 patent. Since 2009, Apple has done nothing to avoid infringement and has, in fact, continued to release additional technology and features that infringe the '699 patent. Apple has even instructed, directed, and encouraged third parties to infringe on the '699 patent—all without Mr. Abe's authorization."

For more details on this case, review the full patent infringement lawsuit filing below provided to you courtesy of Patently Apple

The patent infringement case presented in today's report was filed in the Oregon District Court, Portland Office. At present, no Judge has been assigned to the case.