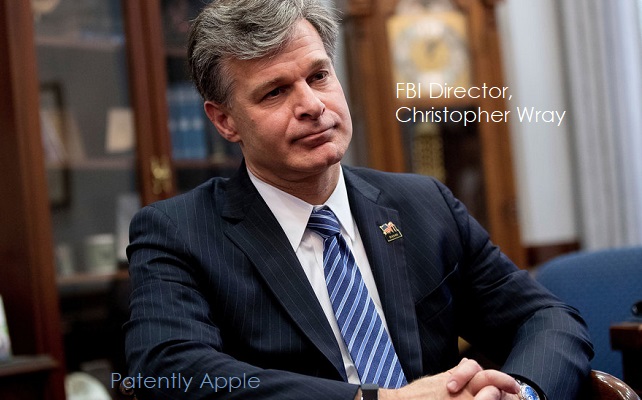 In January Patently Apple posted a report titled "FBI Director Christopher Wray takes up the Fight against Smartphone Encryption calling it an 'Urgent Public Safety Issue.'" During a Cyber Security Conference that same month an FBI Forensics Expert lashed out at Apple calling them evil geniuses. If the FBI is going to make a case against Apple and the industry in general, you'd like to think that the FBI is being honest. Yet with the FBI's reputation coming into question with their overreach in the case over the President's fake collusion with Russia we now learn that the FBI thought nothing of grossly inflating the number of cases lost due to their inability to gain access to devices like the iPhone owned by criminals.

According to the Washington Post, "The FBI has repeatedly provided grossly inflated statistics to Congress and the public about the extent of problems posed by encrypted cellphones, claiming investigators were locked out of nearly 7,800 devices connected to crimes last year when the correct number was much smaller, probably between 1,000 and 2,000..

Over a period of seven months, FBI Director Christopher A. Wray cited the inflated figure as the most compelling evidence for the need to address what the FBI calls 'Going Dark' — the spread of encrypted software that can block investigators' access to digital data even with a court order.

The FBI first became aware of the miscount about a month ago and still does not have an accurate count of how many encrypted phones they received as part of criminal investigations last year, officials said. Last week, one internal estimate put the correct number of locked phones at 1,200, though officials expect that number to change as they launch a new audit, which could take weeks to complete, according to people familiar with the work.

"The FBI's initial assessment is that programming errors resulted in significant over-counting of mobile devices reported,'' the FBI said in a statement Tuesday. The bureau said the problem stemmed from the use of three distinct databases that led to repeated counting of phones. Tests of the methodology conducted in April 2016 failed to detect the flaw, according to people familiar with the work.

The acknowledgment comes at a perilous time for the FBI, whose credibility is being challenged by President Trump and his supporters over the ongoing investigation into whether any Trump associates helped Russia interfere with the 2016 election. The bureau has also been under pressure for other mistakes, including its failure to act on a tip that a Florida teen was likely to carry out a school shooting which police said he did weeks later, killing 17.

The FBI said that despite the phone-counting errors, "Going Dark remains a serious problem for the FBI, as well as other federal, state, local and international law enforcement partners."

While that may be true, trying to win public trust based on faulty data skewed to make their argument "look compelling" tarnishes the bureaus reputation once again. Pretending it was a clerical error doesn't pass the laugh test. If the FBI Director used data to make a case, it was up to the director to ensure that the data he was using was 100% accurate before it was discovered to be faulty, not after they got caught inflating the numbers. For more on this story, click here.

Back in January Patently Apple reported that "During the International Conference on Cyber Security, an FBI Forensics Expert lashed out at Apple Calling them 'Evil Geniuses.'" Perhaps it's time the agency look in the mirror before making accusations that better reflects their own recent behavior like lying to the Fisa Court to spy on a Presidential candidate. That just happens to be 10X more evil than what Nixon got impeached for.