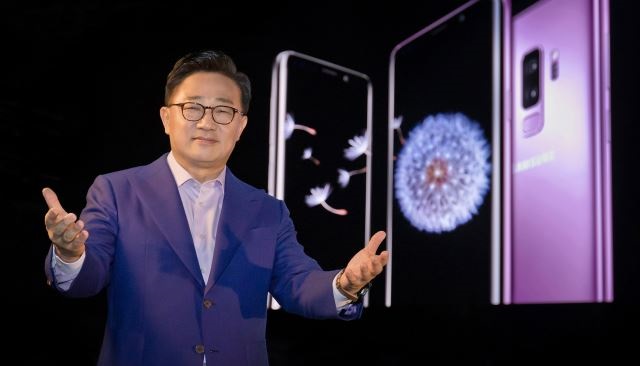 In Early March Patently Apple posted a report noting that Samsung's Galaxy S9 had a lukewarm reception in Korea. It was clear that if their new smartphone was unable to excite their home base, it was likely to spill over to the general market which some tech sites confirmed.

A new Korean report published today is confirming that Samsung's S9 is definitely not selling as expected which has prompted Samsung to push up their Note S9 launch by at least a month.

In addition, the report further notes that Samsung will likely introduce their new Galaxy S10 codenamed 'Beyond' at CES in January 2019 instead of their traditional March release.

With the Galaxy S10 out scheduled earlier than expected, the report is claiming that Samsung will introduce their first foldable smartphone at Mobile World Congress 2019 at the end of February.

The image below is just one of a dozen foldable smartphone designs from Samsung. You could find other design of theirs in our Samsung display archives.

The report also claims that Samsung began to mass produce their 6.38" OLED production last month which is about two months ahead of time.

While the Korean report is sure that the earlier schedule will translate directly to a much earlier launch of the Note 9, it's not the only way of looking at this change in OLED production scheduling.

The new scheduling could very well mean that in order to meet Apple's expanded OLED needs for this fall Samsung Display is simply getting their Note 9 display orders out of the way to ensure Apple that they'll be able to meet their iPhone demand without risk of any display bottlenecks in production.

Samsung wants to continue to be Apple's main OLED display supplier and being on time with this year's iPhone displays is one way of winning Apple's trust.

The scheduling shake-up appears to be confusing some analysts as well who are advancing a strange forecast that Apple will be introducing new iPhones a month or two earlier than usual.

You could theorize that such a move is to directly challenge Samsung's new Note smartphone that is usually scheduled a month ahead of new iPhones. While that's not impossible, it could simply be that some of these analysts are reading their tea leaves incorrectly.

A Samsung official cautioned that "There are a lot of co-works underway with outside part suppliers to develop various prototypes. Their supply timing wouldn't determine our schedules for new launches."

Samsung's caution could be warning Korean publications to stop forecasting Samsung's foldable smartphone which has been hyped for the last two or three years.

Patently Apple reported last year that Samsung chickened out introducing a foldable smartphone. It didn't happen this year either. Will Samsung launch a simpleton's version of a foldable smartphone in 2019 just to get this monkey off their back – or will they actually introduce something newsworthy?

While I personally hope that Samsung could knock it out of the park with a cool, thin foldable smartphone (not the simpleton kind) in order to shake up the smartphone sector that's beginning to get a little boring, I'm not quite sure that Samsung has the guts or imagination to really pull it off.

Their engineers have designed all kinds of fancy complex designs on paper in patents, but they just can't seem to be able to bring it to market. A cool foldable smartphone would also require software savviness to make a foldable smartphone come to life and Samsung is weak in this area.

Samsung loves to copy other company's innovations such as the recent case with Apple's Animojis. Their version is called AR Emoji. While Samsung laughably tried to deny that they copied Apple, delusional denials don't make a convincing argument.

My-oh-my what will Samsung do if there's no foldable smartphone to copy? Only time will tell.