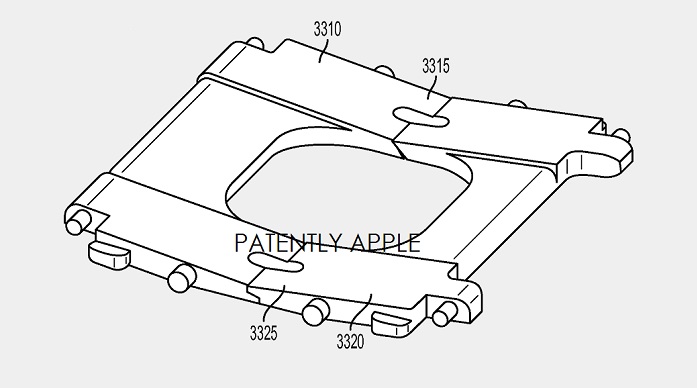 Apple has been Hit with an 8 Count Class Action claiming that the MacBook Pro's keyboard with its 'Butterfly' mechanism is Defective. The filing comes days after a petition was made public days ago, led by elite bloggers in the Apple community. With Apple being hit with more than 60 class actions for reportedly slowing iPhone batteries purposely on older models to promote new iPhone sales, this second hit on their hardware credibility has got to sting and shake Apple fans that have paid a premium price to own Apple products. With Apple not responding to the petition quickly enough, angry Apple fans wasted no time leaping to launch another class action. The class action docket is shown to be demanding the minimum associated with a class actions, which is $5 million.

Count 2: Breach of Covenant of Good Faith and Fair Dealing

Count 3: Breach of the Implied Warranty of Merchantability

The class action below begins with the Plaintiff's "Summary of the Action" which is presented below verbatim so as to not misinterpret their exact complaint. Highlights presented below have been added by Patently Apple.

"This action is brought on behalf of individuals who purchased model year 2015 or later Apple MacBook laptops and model year 2016 or later MacBook Pro laptops (the 'MacBook'). The MacBook Pro is marketed and sold as top of the line—the 15-inch model's starting price is $2,399. But the MacBook is defective: its "butterfly" keyboard is prone to fail. Thousands of consumers have experienced this defect. When the MacBook's butterfly keyboard fails, the keys stick and no longer register keystrokes. As a result, the user cannot type.

Apple's butterfly keyboard and MacBook are produced and assembled in such a way that when minimal amounts of dust or debris accumulate under or around a key, keystrokes fail to register. The keyboard defect compromises the MacBook's core functionality. As a result of the defect, consumers who purchased a MacBook face a constant threat of non-responsive keys and accompanying keyboard failure. When one or more of the keys on the keyboard fail, the MacBook can no longer serve its core function: typing. Thus, when this defect manifests in the MacBook, the computer becomes inoperable and unsuitable for its ordinary and intended use.

Apple knew that the MacBook is defective at or before the time it began selling the affected models to the public. Complaints of keyboard failures began to come in shortly after the 2015 MacBook was launched. Despite awareness of the keyboard defect, Apple equipped future model MacBook and MacBook Pro laptops with the butterfly keyboard, and continued selling these laptops to consumers at premium prices.

Despite awareness of the defect, Apple touted—and continues to tout—the MacBook as having a superior and highly responsive keyboard, with 'four times more key stability than a traditional scissor mechanism.' Apple's representations regarding the MacBook's keyboard were false. Apple failed to disclose that the keyboard is defective, and this information would have been important to Plaintiffs' decision to purchase a MacBook."

Class Action Filed Against Apple Over MacBook Pro Keyboard May 11, 2018 by Jack Purcher on Scribd

Patently Apple posted a patent report back in April 2015 covering Apple's new Butterfly hinge mechanism invention filed in Europe under number WO2015047612. Below is the MacBook Pro with Touch Bar with Apple boasting of its second generation version of the butterfly mechanism found in its keyboard. 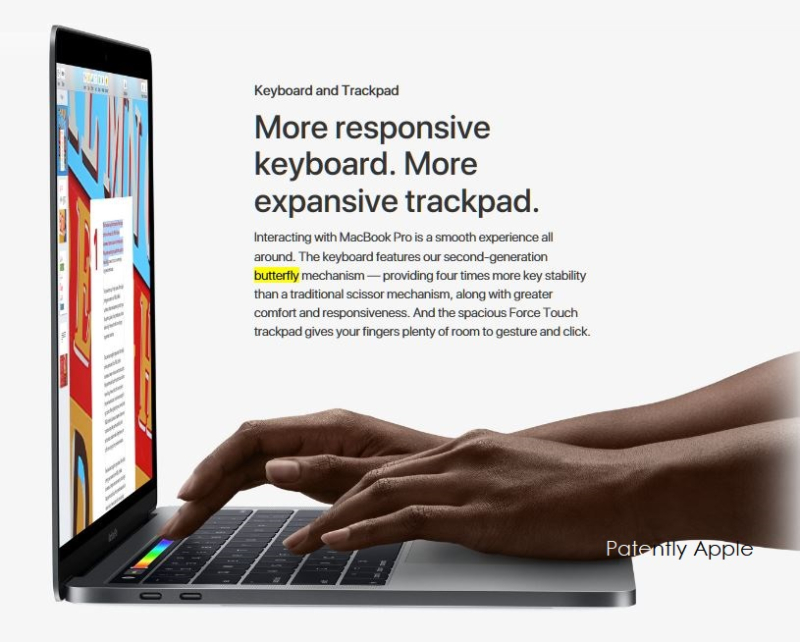