Home Archives Contact Us Subscribe Twitter MeWe Facebook Patently Mobile
Samsung has teamed up with Microsoft to Deliver a High-End Mixed Reality Headset for late this summer
While Apple's Top iPhones in 2018 will use 7nm Processors, TSMC is set to deliver 7nm+ with EUV technology for 2019 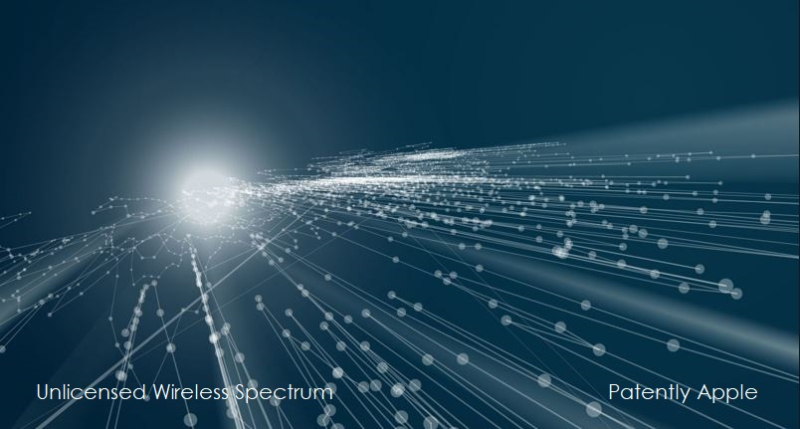 The FCC is taking comments about how it should treat the super-high spectrum bands and Apple is urging them to include more unlicensed spectrum bands for innovation. Our report provides you with Apple's full filing and discussion on the issue that was sent to the FCC on May 2, 2018. All highlighting in yellow below was added by Patently Apple and not from Apple Inc. 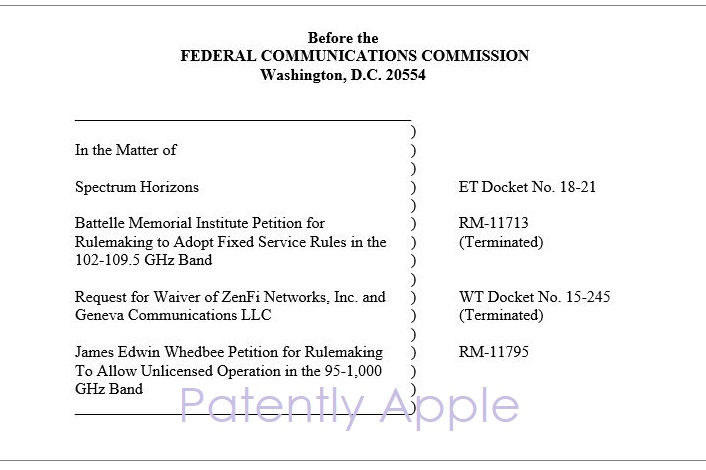 "Apple Inc. ("Apple') applauds the Commission's forward-looking exploration of how the agency can promote innovation and investment in the 95 GHz - 3,000 GHz range, through the Notice of Proposed Rulemaking ("NPRM") in the above-referenced proceeding.

Apple recommends that the Commission approach this proceeding with the goal of encouraging a range of innovative business and engineering approaches that market forces determine best utilize these frequencies, and work to avoid restrictive regulations, band plans, or predictions about future uses of the bands that could dictate outcomes and limit innovation.

Indeed, the FCC's proposal could unintentionally preclude or signiﬁcantly undermine promising technologies that are being coordinated internationally in spectrum allocation proceedings. To achieve its stated goal to facilitate innovation by conservatively allocating this spectrum, the Commission should therefore either support the innovative companies working to develop future wireless technologies by allowing for substantially wider unlicensed bands, or pursue other strategies to preserve regulatory ﬂexibility in recognition of the diﬃculty of making predictions about the future path of technology."

The Commission recognizes that the spectrum identiﬁed in this NPRM is "a largely blank slate upon which bold new technologies can be written" and proposes a "multi-platformapproach" to foster the development of new technologies. Understanding the diﬃculty of predicting future spectrum uses, it wisely attempts to implement the light-touch regulatory approach that it has lauded in other contexts. In particular, the Commission notes that its proposed band structure was designed to achieve "balance between the speciﬁcity needed to encourage further investment and the generality required for spectrum bands whose potential use is largely undeﬁned." It seeks comment on both the particular uses interested parties foresee and whether suﬃcient knowledge exists about those technologies to eﬃciently and appropriately allocate these bands. Wisely, the Commission states that a primary goal of this proposal is to "leave room to enable future . . . access opportunities and technologies."

Apple supports the Commission's vision for the bands above 95 GHz and appreciates its continued eﬀorts to move away from prescriptive spectrum regulations. The Commission should consider, however, the likelihood that the proposed allocation structure will have precisely the eﬀect it hoped to avoid: precluding some technologies and services, including some that are already being considered in international proceedings.

I. The Commission's Proposals May Preclude Planned "Horizons" Technologies.

International coordination is already underway for the use and development of unlicensed technologies that may be incompatible with the band structure that the Commission has proposed. For example, ETSI and the Electronic Communications Committee of the European Conference of Post and Telecommunications Administrations are advancing new short-range radiodetermination applications that would operate between 120 GHz and 260 GHz and would require bandwidths of gigahertz or more to function optimally. Existing forms of this technology are central to various industries, including environmental protection, human safety, and manufacturing. Providing room to develop these technologies at higher frequencies with larger bandwidths has the potential to signiﬁcantly improve the ﬁdelity of these technologies, supporting applications that are infeasible today. Likewise, the ITU has begun to study the use of spectrum between 275 GHz and 450 GHz for high-speed, short range communications technologies, which would similarly depend on suﬃcient spectrum for very wide bandwidth operations.

Therefore, while it is true that this spectrum is a largely "blank slate" today, there are already concrete examples of likely uses for these bands which should be considered in the Commission's decision making. The Commission, in keeping with its light-touch regulatory philosophy, should avoid restrictive rules that would preclude the technologies that have begun to emerge and instead use these examples to inform its expectations about unknown future uses. Prematurely restricting operations above 95 GHz—by, for example, creating only a few narrow unlicensed bands—without reliable information about the technical characteristics of future systems may also threaten future U.S. competitiveness in emerging wireless technologies.

Historically, the U.S. has been a leader in wireless innovation due, in part, to its willingness to open new spectrum. Premature or overly restrictive spectrum regulation, however, results in ineﬃciencies, opportunity costs, and that "familiar scenario" of managing or relocating incumbents when the optimal use for allocated spectrum changes over time. The U.S. risks being stuck with, or racing to undo, improvident and overly restrictive regulatory decisions while the rest of the world forges ahead with new technologies.

II. The Commission Should Establish a More Balanced Spectrum Policy at Supports Both Licensed and Unlicensed Innovation.

Apple strongly supports FCC action to identify more licensed and unlicensed spectrum. Our customers depend on both every day, but a band plan that elevates one over the other would undermine the consumer experience and U.S. competitiveness. As the Commission has repeatedly recognized, both in this proceeding and in others, unlicensed spectrum is a signiﬁcant driver of the innovation that animates the market and spurs U.S. leadership; it facilitates the most aggressive innovation by the largest number of parties. But the proposed allocation structure includes only a handful of unlicensed bands.

By proposing that only a small fraction of the spectrum it allocates should be available for unlicensed use, the Commission reduces the band's potential to support new innovation and growth. It also undermines the balance between speciﬁcity and generality that the Commission seeks as a means to avoid the costs and ineﬃciencies of misallocating spectrum. We therefore recommend that the Commission increase the fraction of the spectrum that it opens to unlicensed spectrum. It need not achieve parity between licensed and unlicensed bands, but the current approach far too heavily preferences licensed technologies.

In part, the Commission could address the need for a higher proportion of unlicensed spectrum by permitting unlicensed technologies to share these bands with licensed services. In addition to allowing for greater innovation, this would dramatically improve the eﬃciency of spectrum use. The Commission has already proposed innovative sharing opportunities between Fixed Service, Fixed Satellite Service, and unlicensed services in its Mid-Band Spectrum NOI and such sharing mechanisms should be explored and implemented at the outset in the bands above 95 GHz. The Commission itself notes that "bands above 95 GHz generally can accommodate spectrum sharing without requiring complex sharing arrangement."

Additionally, permitting sharing from the beginning of the allocation would allow both licensed and unlicensed network designers to engineer their systems in a manner that accounts for sharing and more eﬀectively limits harmful interference. We recommend that the Commission therefore establish a comprehensive, ﬂexible sharing plan and reduce the need for a future reexamination of spectrum eﬃciency, as has occurred consistently in other bands in recent years.

III. The Commission Should Adopt a Band Structure that Is Compatible with a Wider Range of Uses, and Suﬃciently Flexible to Respond to Future Technological Developments

In addition, to the need for a greater proportion of unlicensed spectrum, we recommend that the Commission establish larger unlicensed bandwidths. The proposed unlicensed bands range from 1 gigahertz to 7.2 gigahertz wide. These bandwidths are too narrow to enable optimal use of the technologies identiﬁed above, and are likely to substantially limit the utility of the band for a larger range of still undeﬁned technologies that will seek access to these bands in the future.

Further, the unlicensed bands are intermixed with licensed bands throughout the 95-275 GHz range, thereby limiting the additional bandwidth that could be added through future allocations, and making aggregation far more diﬃcult. To address this issue, we recommend that the Commission create wider contiguous unlicensed bands than suggested in the NPRM.

Another option would be for the Commission to adopt a more gradual approach that recognizes the diﬃculty in predicting future technologies. It could establish licensed and unlicensed designations in a more discrete subset of frequencies to provide certainty in these bands, while reserving judgment on licensed and unlicensed designations in a larger percentage of the spectrum between 95 GHz and 275 GHz. This approach would address the need to identify some bands for more focused development by licensed standards groups, but would not lock in hard-to-make FCC technology predictions for such a large portion of the Spectrum Horizons, thereby better achieving the balance the Commission seeks.

As part of this approach, Apple supports the Commission's proposal for experimental licensing in the bands above 95 GHz and believes that adopting this ﬂexible model will help to spur innovation in the band. As the band is still largely greenﬁeld, this is a rare opportunity to allow for freedom of exploration that does not exist in other bands and advantage should be taken.

Apple supports the Commission's eﬀorts to open a large amount of underexplored spectrum in a way that promotes innovation and leaves room for future uses. Especially on unknown horizons such as these, the Commission is right to trust in emergent market forces over rules based on government predictions about the future of technology. But even high-level allocation decisions can undermine this goal. The small amount of spectrum proposed for unlicensed use, the narrowness of those bands, and their distribution between licensed bands will combine to disadvantage unlicensed technologies and impede further innovation.

As Chairman Pai recently remarked, "instead of having regulators decide which frequencies are useful, we should put spectrum out there as a testbed and leave it to the innovators to ﬁgure out how to use it." In moving forward with this NPRM, the Commission should seek ways to adjust its proposal to better support the innovators who will make these bands successful.