A Nothing Burger Rumor Saved by Bloomberg's Mark Gurman 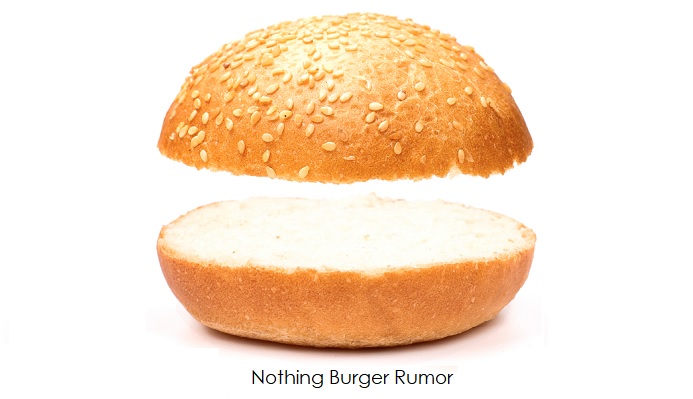 Who doesn't like a plausible rumor with some meat on its bones? And yet there are more nothing burger rumors surfacing all the time from tech sites known and unknown. Earlier this week Patently Apple posted a report titled "Nikkei Delivers another Nothing Burger Rumor about Foxconn's Wisconsin plant shifting focus to making Apple products." The report was actually a broker spewing off his thinking on the subject matter with no proof of anything. It was just click bait.

Yesterday another nothing burger report surfaced from a writer who claims to be a solver of Apple mysteries. Mr. Rambo is a developer and therefore has access to code and ideas about possible upcoming Apple OS features which is a legitimate news niche.

At one point in history Apple made it clear to developers to not make private developer information from Apple public but it's now celebrated with Apple doing nothing about it.

In the end rumors are good for Apple by keeping the buzz alive. Sometimes access to developer information is interesting. They're interesting tidbits worth noting, but mystery solving is a bit of a stretch.

A report published yesterday by Mr. Rambo, simply rambled. He's gone from being a developer with some insight to knowing Apple is prototyping units of this mystery device over at Pegatron. Believable? Not really.

Thankfully Bloomberg's Mark Gurman (ex-9to5Mac reporter) came to the rescue to save this nothing burger report about some kind of mystey device that might be coming by 2020 by rehashing his more cohesively structured rumor that he first revealed back in February.

While it's still a rumor, at least it has a little meat on its bones, a little logic to save us from rolling our eyes in total disgust that we actually clicked on that report.

Whether Gurman's rumor actually surfaces or not, he's got that knack of storytelling that makes you think it's plausible every time to bat. If anything, it's a little entertaining. Thanks Mark.

And thanks to some editor over at 9to5Mac who had the presence of mind to update that nothing burger report with a link to Gurman's rumor. Saved by the bell.