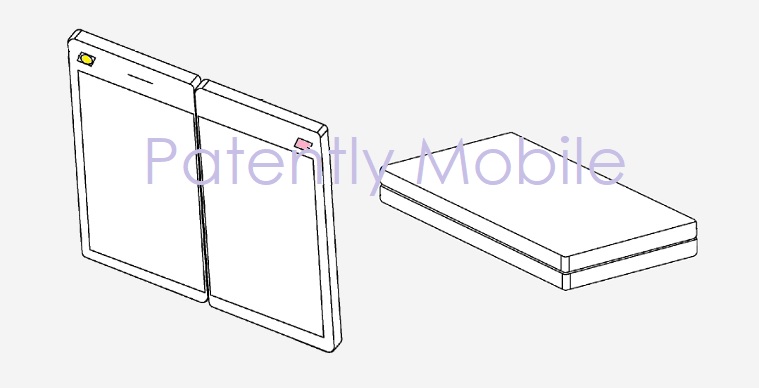 Supply chain rumors had circulated back in December 2016 (one and two) that there were 3 to 5 tech companies working on smartphones that were foldable. The names of Apple, Google and Microsoft kept popping up. Samsung has the largest number of patents on foldable, bendable and scrollable smartphones on record to date with Apple having a number of foldable and bendable patents on record as well. One of Apple's patent figures from a folding smartphone patent is presented below.

Back in October Microsoft's SVP of Operating Systems Group basically said that their Windows Phone was dead. And yet to this day die-hard fans believe it's a bluff and that Microsoft will be back with a Surface branded smartphone of some kind in the future.

It's hard to blame those fans because Microsoft has put so much investment and effort in designing and delivering the Surface tablet, Surface Book, and a daring desktop called Surface Studio which was coincidentally granted a patent this past week. So why wouldn't Microsoft introduce a Surface Smartphone?

Last may the U.S. Patent office published a Microsoft patent application for a folding smartphone that was extraordinarily detailed as a few of the patent figures from that patent illustrate. 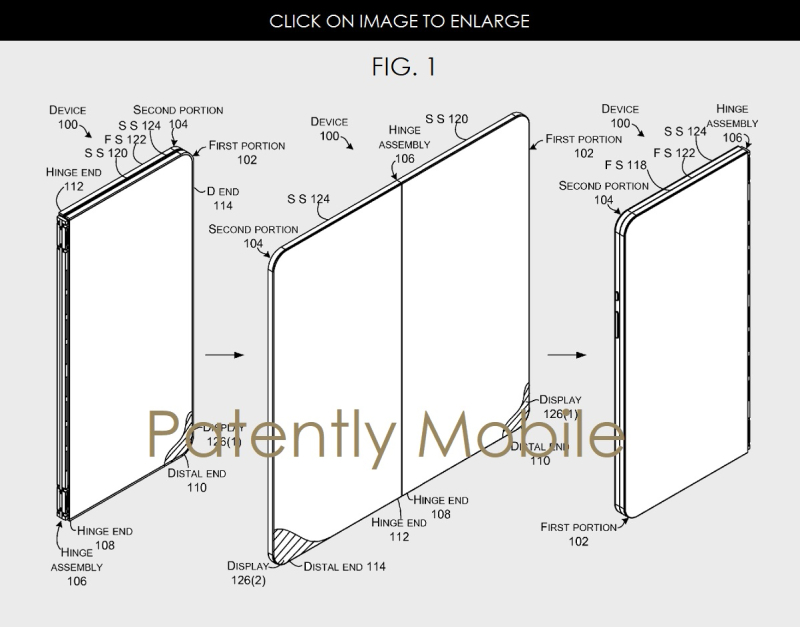 Another interesting Microsoft patent for a dual display smartphone surfaced late last month which I'll dig into a bit further below.

In the Bigger Picture

Before digging into one of Microsoft's latest granted patents, I just wanted to point out something that relates to "the bigger picture." Patently Apple covered the Qualcomm event back in December and touched on the new Windows + Snapdragon platform that's scheduled to launch later this year.

Think about that for a second. If Windows is coming to ARM processors via Snapdragon for 'Always On' 2-in-1 devices like the Surface tablet from 4 or 5 major PC OEMs, could this not extend to a Snapdragon based Windows smartphone; and perhaps a dual display or folded smartphone? Of course it could.

A Windows smartphone like the dual display model that keeps popping up in patents could rattle and rock the market and even challenge Android if not iOS to a certain degree.

Asus, Lenovo, HP and Dell are the tech brands that will be initially supporting this new Windows-Qualcomm platform this year and they could easily add a smartphone to their lineup this year or in the not-too-distant future. These are big hardware volume movers and could easily rattle the market if they decide to support a next-gen smartphone with Windows for ARM.

In Microsoft's latest granted patent for a dual display (or folded) smartphone we learn that Microsoft has worked around adding a sophisticated camera in their thin smartphone design and more importantly, to the face side of the smartphone.

Microsoft states that their camera will have to protrude from the body of their smartphone like those from iPhone 8-Plus and iPhone X models with dual lens cameras.

In Microsoft's folding smartphone design they've decided to place their sophisticated camera on the face side of the phone. In order for the protruding camera not to interfere with the phone in the closed or folded position, Microsoft has created a male-female relationship wherein the protruding camera on the left display will fit snugly into a cavity built into the right display when folded. This is outlined in their patent FIG. 1A below of a dual display smartphone in the open and closed position in an overview position. 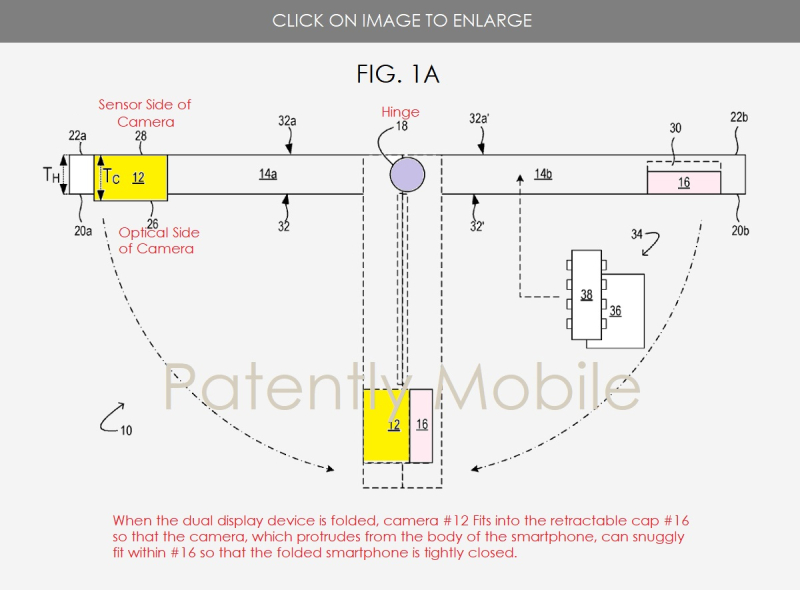 FIG. 1D below shows the handheld device in the folded state, where the housings #14a and #14b may lay flat against one another as regions of the camera #12 that extend outside of housing #14a (e.g., past the inner surface of the housing) press retractable cap 16 inward into the recess. FIG. 1C shows the handheld device in a partially folded state."

In addition, Microsoft explains that there will be a sensor built into the back side of the camera, as seen in patent FIG. 1, that will support a fingerprint scanner for user ID. 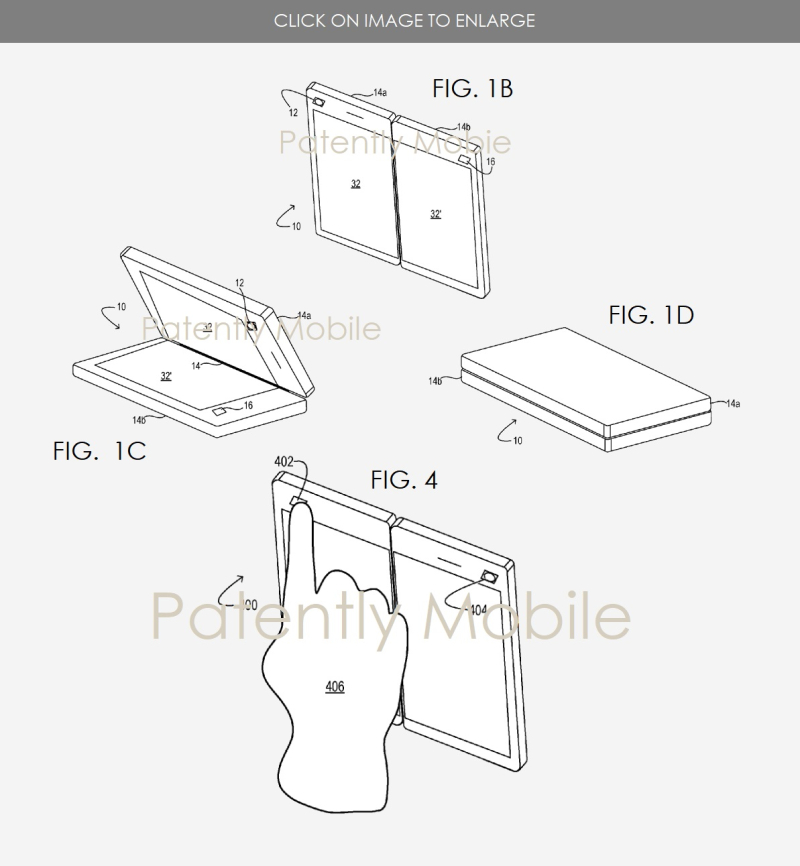 For keeping the dual display closed, the design will either use magnets or a new spring mechanism.

Microsoft further notes that the dual display designed smartphone will work with keyboards, a mouse and game controller. Cortana will be a natural and Microsoft's face side camera will include head tracking, gesture recognition, a depth camera for machine vision, motion detection and lastly, night vision.

Now we can understand why Microsoft chose to place their sophisticated camera on the face side rather than the traditional backside found on Android and iPhones.

To Microsoft's credit, even though their Surface hardware continues to struggle in the market, they've always tried to make a design contribution rather than just copy their competitors. The Surface tablet running Windows on Intel processors with a soft cover keyboard was different than the iPad and Android models. In fact it forced Apple to play catch-up with the iPad Pro, even though Apple sat on such patents for years.

Microsoft's Surface Studio brought a massive touch display to market for artists and architects while delivering a fantastic Quality display and a unique mechanism that allows their large display to go from desktop mode to artist mode effortlessly.

The Surface Studio was designed to be modular and that aspect of the design has yet to surface – but it will and once again add a touch of originality in the AIO space. Apple has been talking about such a desktop design as well since Microsoft introduced their first iteration of Surface Studio.

So a clean next-gen smartphone running Windows on a creative dual display based smartphone that could double as a PC in your pocket that supports Xbox gaming could easily hit the spot for many in the market.

If their smartphone is sexy and smart enough, it could definitely be a disruptive force like the iPhone was to Motorola and Nokia. While it wouldn't win over die-hard iPhone fans, it could win back some Microsoft platform fans that happen to currently use iPhones.

Better yet, if could offer Android fans a real clean alternative by offering a solid OS with regular software updates (what a concept), real business software, Xbox quality games and more. I think it could be a real market disruptor and their latest granted patent continues to show us that they want to bring something fresh to the smartphone space.

Microsoft clearly sees and understands all too well that the iPad pro and Apple's many enterprise partners like IBM, Deloitte, Cisco, SAP and others are quickly encroaching on their space. Apple hiring HP's Global Software VP this week is yet another sign of Apple moving deeper into Microsoft's face.

So expect some surprises clearly aimed at countering Apple's hardware and software moves. Taking a stab at challenging the iPhone is likely high on their list.

So in the end, has Microsoft really given up on the smartphone market? I don't think so and the evidence is slowly building and suggesting that Microsoft is simply reinventing their vision of the smartphone under their Surface brand. So stay tuned.