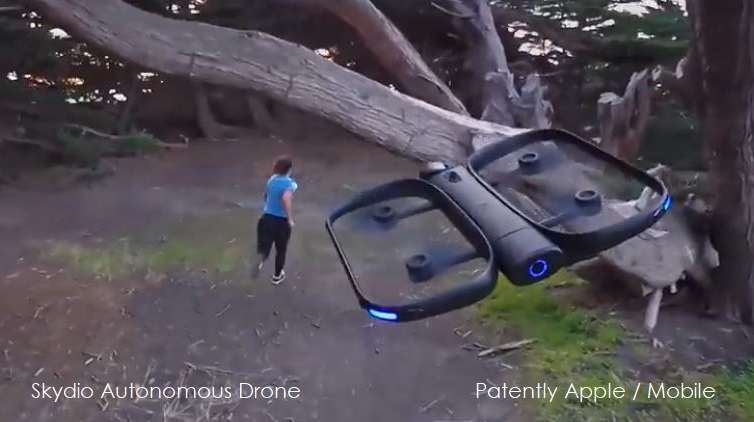 In Apple's iPad accessories section on their website you could find a distinct category for drones. They have a decent selection from companies like DJI, Parrot and Propel. One drone company not listed yet is called Skydio. That particular R1 smart drone model is different than all others in that it could run autonomously while filming  a user jog, ski, bike, skate, swim and so forth. The video below really provides you with a nice overview and feel for the new R1 drone.

As one reviewer put it, it's like having your own film crew with you as it could capture you on the fly, which is something that Hollywood can't even do economically.

The R1 smart drone uses technology that Apple is now engaged in with iPhone X like 3D Depth Mapping (SLAM), AI and more. It could be an excellent avenue for Apple's engineers to show-off some of their technology prowess beyond the iPhone X.

Apple's smartphone competitor Samsung was granted two design patents this month alone for a future drone of their own. Considering that Apple and all serious smartphone competitors place so much emphasis on their camera features and photo quality each year, drones could be the next great thing for showcasing advanced camera technology.

Today Apple's iPad offers Apple Pencil, an important accessory for writers, sales people, doctors and artists from beginner to pro. A drone accessory could be a tool for photographers, those in video media production, those making documentaries or even creating special news reports like the ones that covered the Apple Park under construction over the years.

Apple has likely sold millions of Apple Pencils since launching them, which justifies the Apple Accessory. An Apple smart drone would likely cost as much as a top end iPhone, which would initially limit its market size.

Then again, Apple's fan base is hungry for new Apple devices and accessories and with the right keynote twists with Jonathan Ive selling the design and award winning photographers showing how they use the new drone for various photo shoots and projects, Apple could likely make an Apple smart drone more popular than Apple TV is today. It could also be a great gift at Christmas for the kids.

On the other hand, Samsung is quicker to jump on new ideas like a cheap headset and smartwatch. And so a smart drone may be an interesting accessory that they could bring to their Galaxy smartphone lineup.  Something unique to show off their AI capabilities on and more.

This month Samsung was granted two drone patents with a few patent figures of each shown below. Unfortunately design patents never provide us with actual specifications and the technology behind them. All we get are patent figures. But at least it shows us that Samsung has given their engineers the green light to at least begin to work on this project that could end up being a viable product in the future. 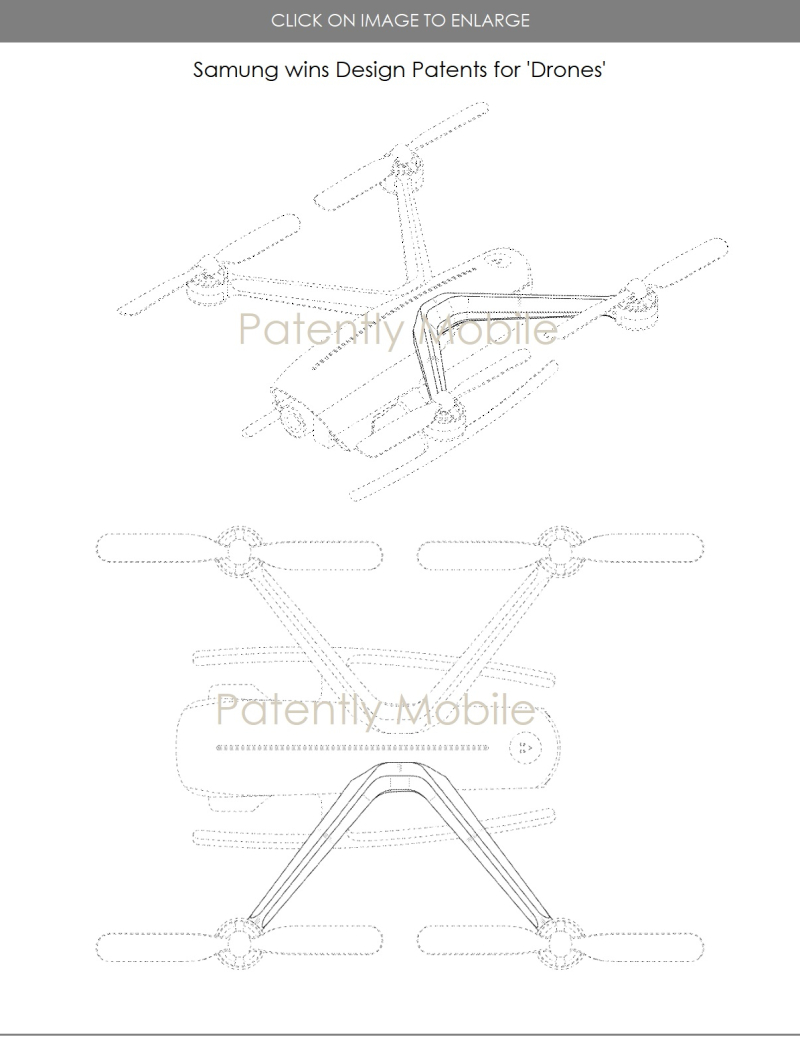 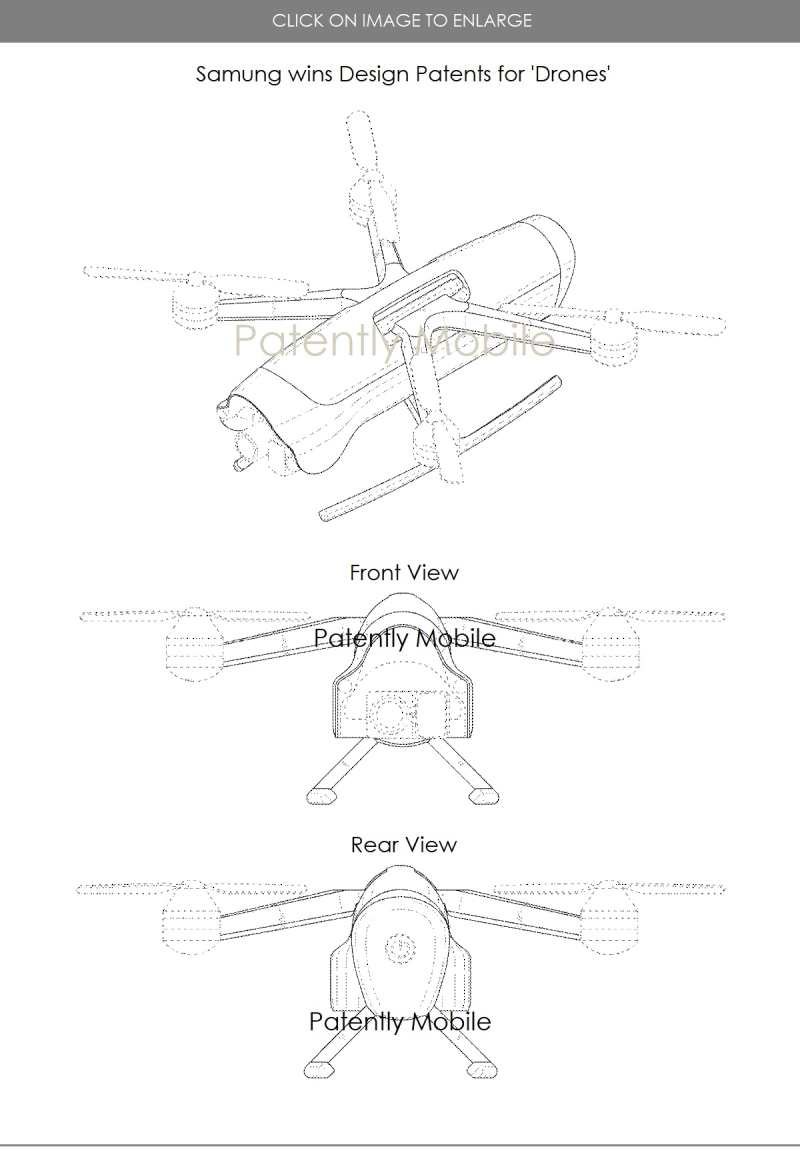 Samsung's first drone patent was filed in South Korea in 2016 and we covered that development in a report titled "Are Apple and Samsung Racing to bring a Drone to Market? Evidence Discovered this week Suggests they may be."

While Apple's 2016 patent application, noted in our report, never used the word "drone," it did in fact cover robots and autonomous agents in context with a collision avoidance system; a feature needed to ensure that drones don't crash into trees or other objects while filming the user in their environment as the Skydio drone video showed us.

Also remember that Apple's CEO Tim Cook told investors last summer that "[Autonomous] systems can be used in a variety of ways. A vehicle is only one, but there are many different areas of it. And I don’t want to go any further with that."

While Samsung was awarded a few design patents this month, it doesn't directly correlate to an instant product or even guarantee that it will ever come to market. Yet with smartphone makers currently placing a lot of emphasis on bringing AI to current and future devices – be it Google, Apple, Microsoft, Huawei or Samsung – at least one of the key smartphone players is likely to step out from the crowd and enter the smart drone space in the next few years.

While there's a lot of chatter about which Silicon Valley Company has the lead in AI, consumers need to actually see AI in products in order to judge it for themselves. Smartphones will be one device using more AI features over time as will smart speakers, autonomous vehicles and the next generation of smart drones. As noted in the video above, Skydio uses an Nvidia AI chipset to distinguish their product from all others.

It's hard to believe that today's leading smartphone companies will allow Nvidia to walk away with the entire smart drone market without a challenge. Then again, perhaps I'm wrong.

While it's a little too early to start predicting which Smartphone Company may be the first to take a stab at bringing a next-gen drone with AI to market, I'll put the question to you: Would you like to see Apple enter the smart drone market in the future? Weigh in by sending your comments in below.