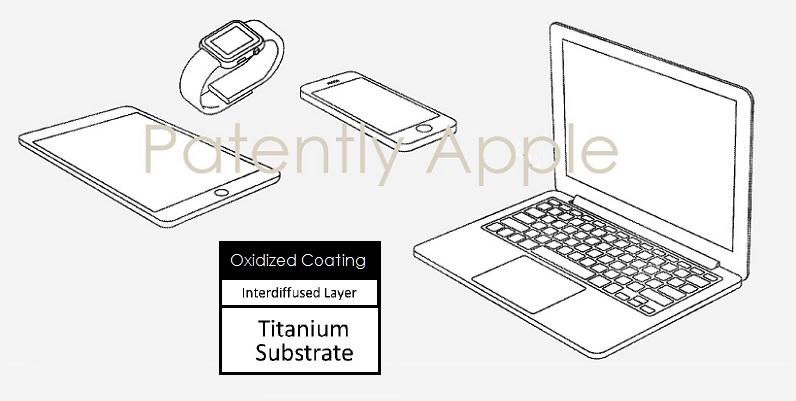 Today the US Patent & Trademark Office published a series of patent applications from Apple that reveal their work on treated titanium, chemically resistant compounds and protective enzymes that could one day apply to packaging films, iDevices, Macs and perhaps their Titan project.

Apple thinks that devices made with chemically resistant, tough COC could become a candidate for metal replacement in consumer devices. Apple's engineers note that "It has been found, unexpectedly, that a combination of two other polymer types can provide both chemical resistance and impact toughness, particularly in balance, to be suitable for any consumer product as a metal replacement initiative."

Apple's patent filing is broken down into segments titled Impact Modifiers, Chemical Resistance Polymer, Optional Additives, Processing and Examples. The list of products that could use COC polymer compounds is listed in the patent filing.

Those that could apply to Apple include LCD projectors, mobile phones and other handheld electronic devices, connectors, chip trays, circuit breakers, and plugs. More specifically, Apple points to the iPhone.

Apple later notes that "The alloys can be used in electric interconnects in a display, such as a digital display, a TV monitor, an electronic-book reader, an iPad, Apple Watch, a Mac monitor, iPod, Apple TV, remote controls, MacBook keyboard, trackpads, Magic Mouse and speakers.

Wikipedia notes that other cyclic olefin copolymer applications include Healthcare, Optics such as touch screens, lenses and more.

Patently Apple covered an Apple patent filing that explored the use of titanium for future Apple devices close to a year ago. Oddly today's patent application was filed at the very same time as the one we covered but has only come to light today by USPTO.

While last year's patent filing focused on surface coatings of iPhones in dark grey or black. Today's patent filing takes a different take on using titanium or titanium alloys in that they're viewed as lightweight and corrosion resistant.

Today Apple notes that although titanium surfaces are regarded as inherently corrosion resistant, they can readily oxidize, which makes them susceptible to staining when exposed to certain environments. Furthermore, when titanium is anodized, a thin barrier layer type film is formed, which offers little abrasion protection. In particular, the titanium oxide film it very thin and therefore susceptible to uneven wearing, which can result in a cosmetically unappealing titanium part.

What are needed are coatings for titanium and titanium alloys that offer improved abrasion resistance and that are cosmetically appealing. Apple is considering the use of titanium for all of Apple's products and the new coating detailed in their filing are needed to make it happen.

Apple notes that electronic devices often include polymers. For example, electronic device housing structures, gaskets, adhesives, and other structures may be formed from polymers. If care is not taken, these structures may be vulnerable to degradation from environmental contaminants. For example, exposure to fatty acids from human sweat and skin oils can cause polymers to swell and degrade.

With Apple Watch aiming to cater to athletes, it's evident that sweat is going to be a factor that has to be dealt with. Apple's invention summary notes that electronic device may have polymer structures such as polymer housing structures, gaskets for forming seals between structures such as display cover layers and housing structures, polymer that fills gaps between housing walls, adhesive, tapes, and other structures with polymer. To prevent degradation of the polymer from exposure to fatty acids and other potentially harmful materials, a protective enzyme may be incorporated into one or more of the polymer structures.

The present disclosure encompasses the recognition that certain enzymes and polypeptides may be useful to neutralize (e.g., prevent or mitigate) damage to polymeric compositions caused by lipids. Exposure to certain secreted biological fluids containing lipids (e.g., human sweat and skin oils) can cause some polymers to swell and degrade. In some embodiments, an enzyme of the present disclosure facilitates degradation of a lipid, and thereby prevents damage to a polymeric structure. In some embodiments, an enzyme useful in the context of the present disclosure facilitates degradation of harmful lipids such as fatty acids.

Although most of the patent figures focus on the Apple Watch, the patent notes that Apple's solution to this problem could be used in future versions of the iPhone, iPad, AirPods, a head mounted device and more. For those interested in this subject matter, check out Apple's patent application 20180077813 here.