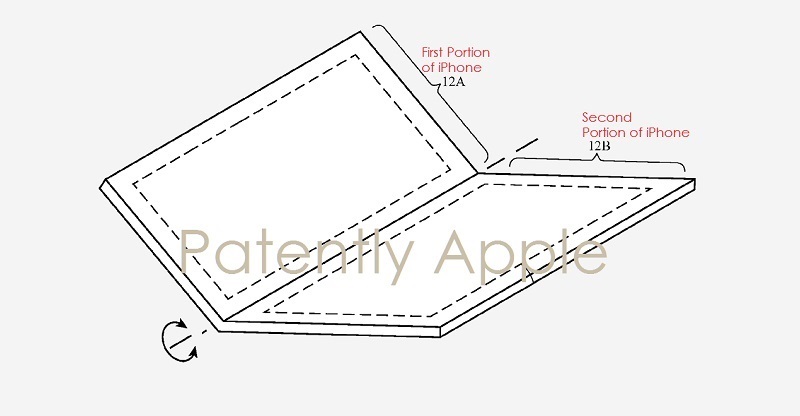 In 2017 Patently Apple posted at least three patent reports on Apple continuing their work on a possible future foldable iPhone (one, two and three). While I report on patents I try my best to never forecast when an invention will come to market because the iPhone and Apple Pencil were inventions in patent form for a decade or more before they saw the light of day. Not all inventions take that long, of course. Still I leave the predicting to analysts and/or supply chain informants. Today a Wall Street analyst made it known that Apple plans to come out with a radically different iPhone design within two years.

Today CNBC reports that analyst Wamsi Mohan from Bank of America Merrill Lynch wrote in a note to clients Friday that "Our checks also suggest that Apple is working with suppliers on a foldable phone (that potentially could double up as a tablet) for launch in 2020."

At the moment, Samsung has a substantial lead on patent filings regarding folding and scrolling smartphones as recorded in our Patently Mobile archives here.

Back in 2016 I posted a report titled "A Leading Supplier of Foldable Display Technology Confirms Five Tech Companies are Testing Foldable Smartphones." So there's been supply chain speculation for some time now that Apple is far beyond the patent phase at this time. So perhaps the Bank of America Merrill Lynch has one of their suppliers in Asia beginning to sing.

Of course the analyst just happened to reiterate his buy rating for Apple shares and reaffirmed his $220 price target for the company, representing 30 percent upside to Thursday's close. Of course having a fresh new rumor to back his positive target never hurt.

Apple's shares have been volatile in recent days due to the announcement by President Trump that he was going to implement new tariffs on China which he officially did yesterday.