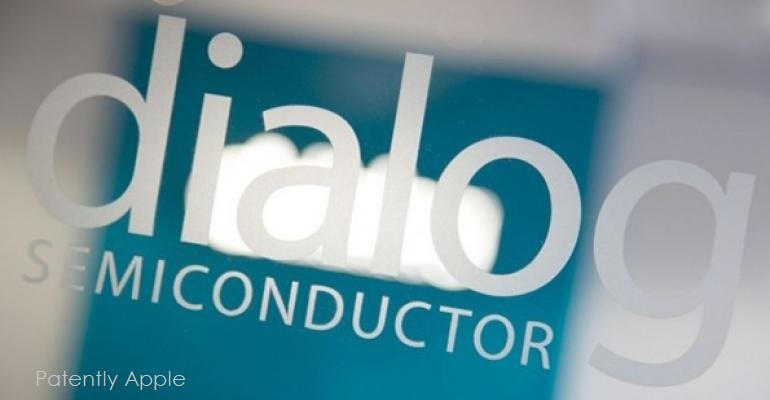 In late November Patently Apple posted a report titled "Rumor of Apple Developing its own Power Management Chip Drops Dialog Semiconductor's Stock price in Frankfurt," followed by an early December report titled "Dialog Semiconductor's CEO Admits Apple is developing a replacement chip in-House, Stock Tumbles Further." Reporting on their latest financials Dialog's Chief Executive Jalal Bagherli told a German newspaper that he fully expects Apple will continue to its chips for a significant proportion of its devices in 2019 and 2020.

Reuters reports that Jalal Bagherli told the weekly Euro am Sonntag a ger in an interview that "Apple at the start of the year commissioned us with the design of chips for many devices for 2019 and 2020," without providing any details. I'm sure that their non-disclosure contract would make sure of that.

Reuters further noted that "Dialog's stock has lost more than half of its value over the past year on investor concerns that Apple is working on its own battery-saving chips for iPhones." Yet this week's good news saw the stock surge on the news of Apple's commitment to at least two years of contracts.

Bagherli told Euro am Sonntag that 'Negotiations over that chip are still ongoing. But we expect to deliver a chip design for testing in the customer's system in the second half of the year."

"The chip manufacturer and Apple Supplier (Apple) dialog Semiconductor can alleviate the worries of its bagged investors somewhat with the promise of further growth. For the current quarter, group CEO Jalal Bagherli expects sales of 330 to 360 million, as the TecDAX company shared on Wednesday. Analysts were more likely to expect values at the lower end of the range. A "good" plus should also jump out in the whole year that has started. Until noon, the dialogue shares climbed by almost 11 percent to 27.63 euros.

No bad news is good news, commented Commerzbank analyst Thomas Becker. Dialogue had fallen into heavy water with its share price at the end of last year, because investors fear a departure of the dominant customer Apple for important chips. The paper was slipped at the end of November, in the beginning of December within a few days of more than 38 euros to a good 22 euros, thus more than a billion euro market value went down the creek.

Skeptical investors have been doubting for a long time whether the reliance on Apple's large-scale customer is good for the company in the longer term: it is said that the Californian electronics giant will develop chips for the iPhone's power Management (PMIC) in the future and What dialogue would cost a considerable part of the turnover. The company estimates by analysts three out of four dollars in sales with Apple.

In response to the turbulence in the course, dialogue had announced that the group would continue to supply corresponding components. But the confession that the tech giant could do this for a long time also made for another course slide. Skeptics have confirmed that from 2019 onwards there could be a loss of business.

CEO Bagherli has been trying to make the manufacturer of power and Bluetooth radio chips so wider, but big takeover plans failed. In early November, dialogue closed the takeover of the smaller rival Silego. "We will continue to invest in differentiated technologies in the future in order to create potential for further growth," he now promised.

The manager can rely on round-running transactions. Finally, there have been media reports that new iphone models from the Californian electronics giant do not arrive as well as expected in consumers. But there was not much to see in the fourth quarter: dialogue screwed sales up 27 percent to 463.5 million dollars, adjusted operating earnings climbed 28 percent to 108.1 million dollars as expected. The bottom line was that the profit even accelerated by more than half to 81.9 million dollars.

"For 2018, we are still well positioned in the areas of mobility and the Internet," said Bagherli. Thanks to the filled pipeline, he is confident for the current business. In the middle of the aiming, management continued to increase by more than one quarter in the first quarter compared to the same quarter of the previous year, even by almost a third at the top.

As in previous years, the targeted "good" growth in the year as a whole is mainly due to the second half of the year, it was said-in the third quarter, Apple usually presents new models that are then sold in the Christmas quarter. For the new model generation of the largest customer, the company had new orders for the PMIC chips in question in the past quarter. From product to product will be decided by Apple again.

In terms of profitability, dialogue wants to maintain the level achieved. In the first quarter, the gross margin on the capital market is expected to remain at the level of the year-end 2017, as it had lain at 45.2 percent. Usually a slight decline was usual, said Commerzbank-expert Becker. The gross margin compares the manufacturing costs of products with the selling price-sales and administration costs are excluded. In the year as a whole, the level of the previous year should also be achieved. Consequently, dialogue does not see a negative price pressure. [In fact they see] + 44% in 24 months with low price fluctuations."