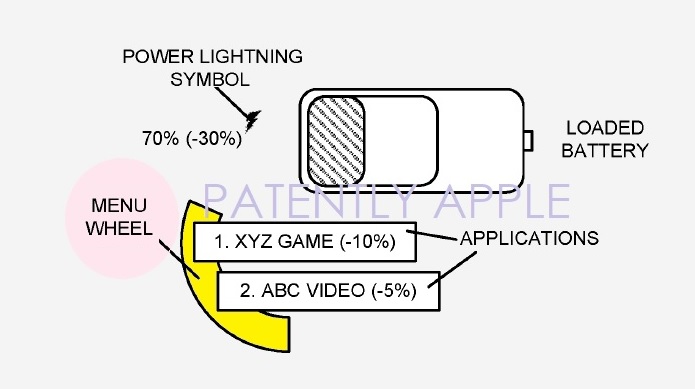 On December 28th Apple posted a message to their customers about iPhone batteries and performance along with a technical article. On December 29th, Patently Apple posted a report titled "Despite Apple's Public Apology and Explanation of Battery Performance, another Class Action was Filed Yesterday in San Jose." By that time, more than a dozen class actions were filed against Apple for purposely slowing iPhones without user knowledge. Over 60 class actions have been filed since December 22 with more still trickling in.

Today, Patently Apple discovered a new Apple patent filing published in Europe that was originally filed back in December 2016. The filing reveals that Apple has been working on adding a new environmental temperature sensor for iDevices and MacBooks along with a new interactive battery life icon that is designed to convey temperature warnings and a way for users to request more information about the environmental / temperature warnings.

Before diving into the summary of the new patent application, it must be noted that Apple currently has a webpage titled "Maximizing Battery Life and Lifespan." Here Apple covers information and various tips about maintaining battery life. One specific point is titled "Avoid extreme ambient temperatures as noted below:

Your device is designed to perform well in a wide range of ambient temperatures, with 16° to 22° C (62° to 72° F) as the ideal comfort zone. It's especially important to avoid exposing your device to ambient temperatures higher than 35° C (95° F), which can permanently damage battery capacity. That is, your battery won't power your device as long on a given charge. Charging the device in high ambient temperatures can damage it further. Software may limit charging above 80% when the recommended battery temperatures are exceeded. Even storing a battery in a hot environment can damage it irreversibly. When using your device in a very cold environment, you may notice a decrease in battery life, but this condition is temporary. Once the battery's temperature returns to its normal operating range, its performance will return to normal as well.

Now Apple wants iDevice users to be warned about extreme ambient temperatures in real-time on their respective iDevices and MacBooks. For convenience, users will be able to simply touch the battery indicator on the display to interact with it and get more information about a possible problem.

For example, the battery may have a temperature-dependent cell impedance that results in the inaccessible charge.

Furthermore, the electronic device may receive a user input representing a request for additional information about the second indication representing the inaccessible charge.

Note that the battery may have a temperature-dependent cell impedance that results in the inaccessible charge. 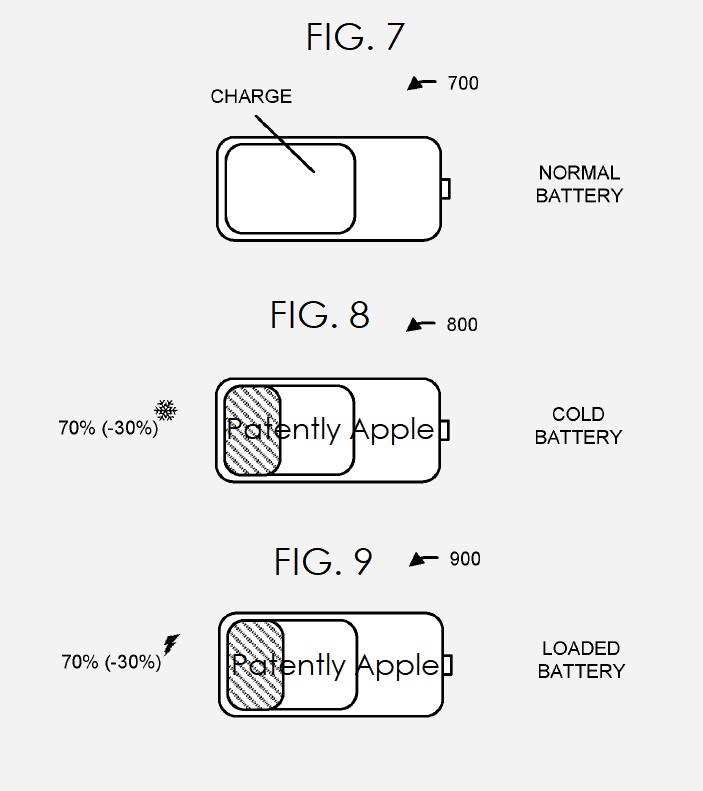 Apple further notes in the patent's description area that using control logic the locked energy may be classified as cold-related or power-hungry related which is presented above in patent figures 7-9.

In particular, patent FIG. 7 illustrates battery-status indicator #700 that represents the total charge of a 'normal' battery (when the environmental condition is not present), while FIGs. 8 and 9 illustrate battery-status indicators #800 and #900, respectively, that represent the inaccessible charge, the accessible charge and the total charge of a cold battery and loaded battery. Note that the inaccessible-charge indicators or icons shown in FIGs. 8 and 9, respectively, may only be displayed when the environmental condition is present (such as when the temperature is low enough and/or the load is large enough).

In some embodiments, numerical values are presented or displayed along with the icons. For examples, the numerical values may be displayed adjacent to or proximate to the icons. Thus, at extremely cold temperatures, the locked energy may be shown as negative number. Moreover, a cold symbol indicator (such as snowflake) may be used. In addition, the icon or indicator may be colored (such as blue or red) to indicate cold.

Similarly, at extremely heavy loads (e.g., more than 1 A of discharge current), the locked energy may be shown as negative number. Moreover, a power lightning symbol may be used. In addition, the icon or indicator may be colored (such as red) to indicate the heavy load. 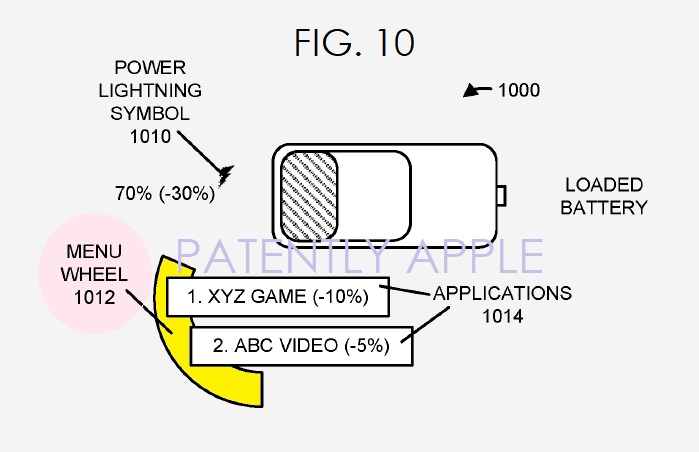 Currently an iPhone user is able to go into "Setting" and "Battery" to view battery percentages presented so users could see what apps are draining the battery the fastest so that they could stop using a particular app until they're able to recharge. They can also activate "low power mode" to automatically kick in to save on battery life until a user can recharge.

In Apple's new patent filing, when the user see's their battery life in "loaded battery" mode they're able to request more information about the condition and a "Menu Wheel" will appear on screen without having to go to settings as noted above.

In response to the user input, the portable electronic device may display information specifying one or more applications executing on the portable electronic device and numerical values of associated amount of inaccessible charge, where the amount of inaccessible charge associated with an application is based on current usage of electronic-device resources by the application (such as memory, an interface circuit, a CPU, a GPU, a display or a backlight, a user interface, a camera, etc.).

By displaying the indications of the battery-charge parameters, this feedback technique may provide more accurate feedback to a user about battery performance. The improved feedback may, in turn, improve the user's situational awareness about the battery performance, which may allow the user to adjust power usage and to set the user's expectations as to how much battery energy is currently available. Consequently, the feedback technique may reduce user frustration when using the electronic device in the presence of the environmental condition, and therefore may improve the user experience when using the electronic device.

Apple's patent FIG. 3 presented below represents a block diagram illustrating an example of a portable electronic device such as an iPhone that implements the feedback technique. 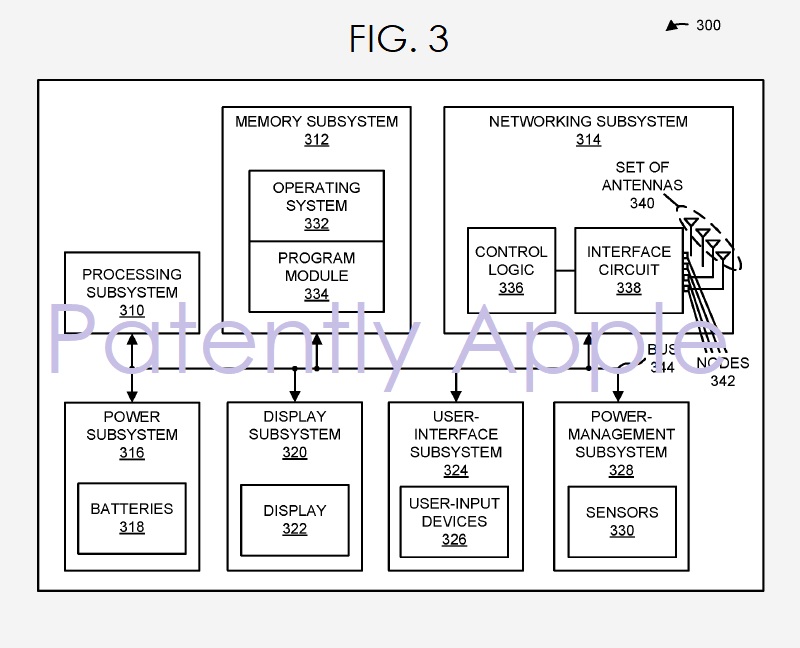