Home Archives Contact Us Subscribe Twitter Facebook Patently Mobile
Another iPhone Battery Fire has Occurred, this time at one of Apple's Hong Kong Stores
Apple Supplier Pegatron is Positive about Apple's Premium iPhones and Hints of New AI and AR features coming in 2018 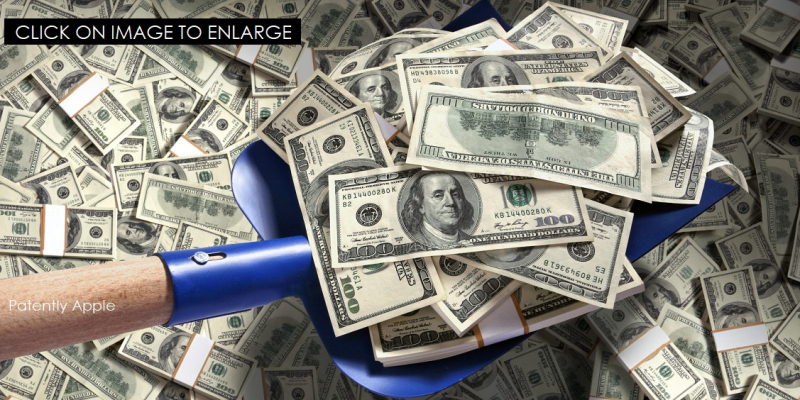 Apple had another great quarter, despite the market diving on Friday. Tim Cook's summary of the company's performance for the holiday quarter showed Apple had positive news on hardware and services. They were firing on all cylinders. Apple's 2017 fiscal Q1 had a full week less of iPhone sales than in 2016 accounting for iPhone sales missing their mark by 1% compared to last year. Cook pointed that out in his conference call and it fell on deaf ears.

On an equal number of weeks for the quarter, Apple would have shown growth for iPhones. The press didn't want to explain that important detail in their reporting and stuck with misinformation that Apple "missed" their iPhone sales; that they had "disappointing" iPhone sales. In other words, fake news was once again at play. 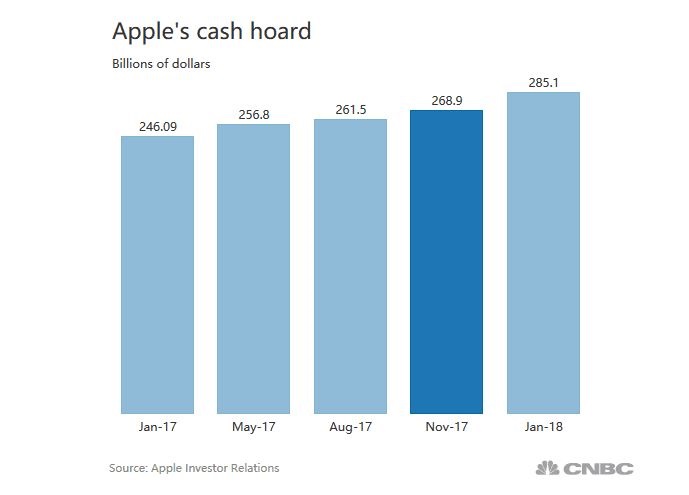 Despite the negative headlines, Apple's cash reserves hit an unbelievable $285.1 billion, a new record, reflecting the company's move to high-priced iPhone and new tax regulation. That's compared to $268.9 billion in the prior quarter, reports CNBC.

"Apple has said it plans to make $38 billion in tax payments to reflect new tax rules passed last year. Wall Street has speculated that the lower tax rates may open the door for the tech giant to bring back cash from overseas and put it to work through acquisitions or by returning money to shareholders."

Apple has already given us some insight into what they'll do with some of the cash. On January 17 Apple announced that they would contribute $350 billion to the US economy over the next five years including the creation of 20,000 jobs (not necessarily for Apple alone) and investing $5 billion more into the advanced manufacturing fund which is known as the "SoftBank Vision Fund."

With Apple's mind boggling cash pile hitting a new record, you have to wonder why they aren't investing more aggressive  with larger acquisitions or at least more aggressively in their new video content service so that it could better compete for new shows with current leaders Hulu, Netflix and Amazon's Prime. This week HBO's bid for J.J. Abrams new series "Deminmonde" beat Apple's bid. Netflix will spend $8 billion in programming this year alone in contrast to Apple's meager budget.

A lot of Apple fans, including myself, were hoping Apple TV would translate into something of value within a few years after its initial release back in 2007. Yet it has always stayed stuck in hobby mode and really never lived up to its branding related to TV.

It never lived up to the hype Tim Cook hyped up with NBC and Charlie Rose. After a decade of waiting, I finally gave up this month and switched my Netflix account to my cable box. Why stick with Apple TV after a decade of false promises?

Apple TV turned into such a disappointment and with all of Apple's cash sitting around they were never able to figure out how to make a go of it. It was an Eddy Cue failure. Even Steve Jobs said that Apple finally "cracked it" referring to smart TV and after a decade of utter failure, it's clear Apple never came close to "cracking it."

Even if Apple launched their Worldwide video service this year, it would only be a supplement to Netflix at best. So until Apple is serious about their new content services venture and Apple TV in general, I'll go with the services that actually deliver: Netflix and my local cable company.