Home Archives Contact Us Subscribe Twitter Facebook Patently Mobile
WSJ Claims that Apple is Adding Subscriber Accounts in the U.S. at a Higher Rate than Spotify
A Chinese National Living in the U.S. on a Student Visa Pleaded Guilty as a Counterfeit Distributor of Apple iDevices 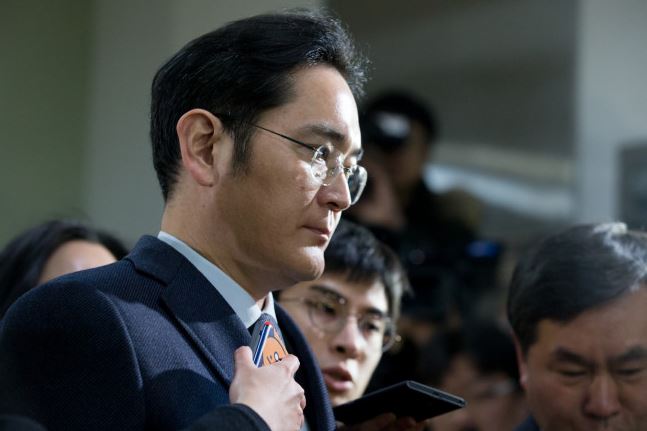 In late August 2017 Patently Apple posted a report titled "Samsung in Shock as Vice Chairman Lee Jae-young is sentenced to a Five Year Jail Term." The verdict rocked South Korea. Yet like his father who was sentenced to 7 years for financial wrong doing and tax evasion and ended up only serving several months, today history repeats itself for the next generation of Samsung's leadership. Today Samsung Electronics Vice Chairman Lee Jae-yong was freed as a Seoul appellate court cleared him of some charges and handed down a suspended sentence after serving only five months in jail.

The Seoul High Court quashed a lower court's ruling on Lee, who had been sentenced to five years and handed down two years and six months imprisonment suspended for four years. Prosecutors had maintained a 12-year prison term for Lee.

The 50-year-old scion of the biggest conglomerate in South Korea was convicted of bribery, of giving 8.8 billion (US$8.2 million) to former President Park Geun-hye and her confidante Choi Soon-sil, in return for government backing for the merger of two key Samsung units, which the prosecution viewed as critical for his leadership succession of the corporation from his ailing father, Lee Kun-hee.

Lee had faced five charges, including embezzlement and hiding assets overseas. But the upper court did not acknowledge that Lee had provided the illegal funds as an implicit solicitation for special favors nor acknowledge that Lee deliberately hid the assets. The court also denied Lee's charges on perjury for falsely testifying before the National Assembly at a hearing last year.

On January 14, 2008, Korean police raided Lee's home and office in an ongoing probe into accusations that Samsung was responsible for a slush fund used to bribe influential prosecutors, judges, and political figures in South Korea. On April 4, 2008, Lee denied allegations against him in the scandal. After a second round of questioning by the South Korean prosecutors, on April 11, 2008, Lee was quoted by reporters as saying, "I am responsible for everything. I will assume full moral and legal responsibility." On July 16, 2008, The New York Times reported the Seoul Central District Court had found Lee guilty on charges of financial wrongdoing and tax evasion. Prosecutors requested Lee be sentenced to seven years in prison and fined 350 billion won (approx.. $312 million USD). The court fined him just 110 billion won (approx.. $98 million USD) and sentenced him to three years' suspended jail time. Lee has not responded to the verdict.[26] Months later, South Korean president Lee Myung-bak pardoned Lee so he could remain on the International Olympic Committee.

With an estimated net worth of $7.2 billion, he and his family rank among the Forbes richest people in the world. He is the third son of Samsung founder Lee Byung-chul.

In 2014, Lee was named the world's 35th most powerful person and the most powerful Korean by Forbes Magazine's List of The World's Most Powerful People along with his son Lee Jae-yong.

In South Korea, you don't jail the leaders of the country's largest employer; it's just not acceptable to the powers that be. Another circus trial has concluded as most believed it would.