The U.S. Patent and Trademark Office published a granted patent for Microsoft today that reveals a smart pen retention clip that could be used to easily scroll through a document or web page, or zoom in on an object in a photo by simply sliding a finger up or down the touch sensitive clip.

Microsoft states in their granted patent that their covers a stylus that includes a touch-sensitive retention clip. The stylus may be configured to detect a position or movement of a finger along a length of the retention-clip. Further, the stylus may be configured to send information to a computing device based on the detected position or movement of the finger along the length of the touch-sensitive retention clip. As the finger changes position or moves along the length of the retention clip, the information that is sent to the computing device changes to reflect the change in position. Such information may be used by the computing device to effectuate computing operations, such as scrolling or zooming operations. By providing a touch-sensitive retention clip on the stylus, the stylus is able to provide scrolling, zooming, and/or other computing functionality in a manner that is similar to a scroll wheel of a mouse device. As such, a user may forgo using a mouse device in favor of the stylus when interacting with a computer. 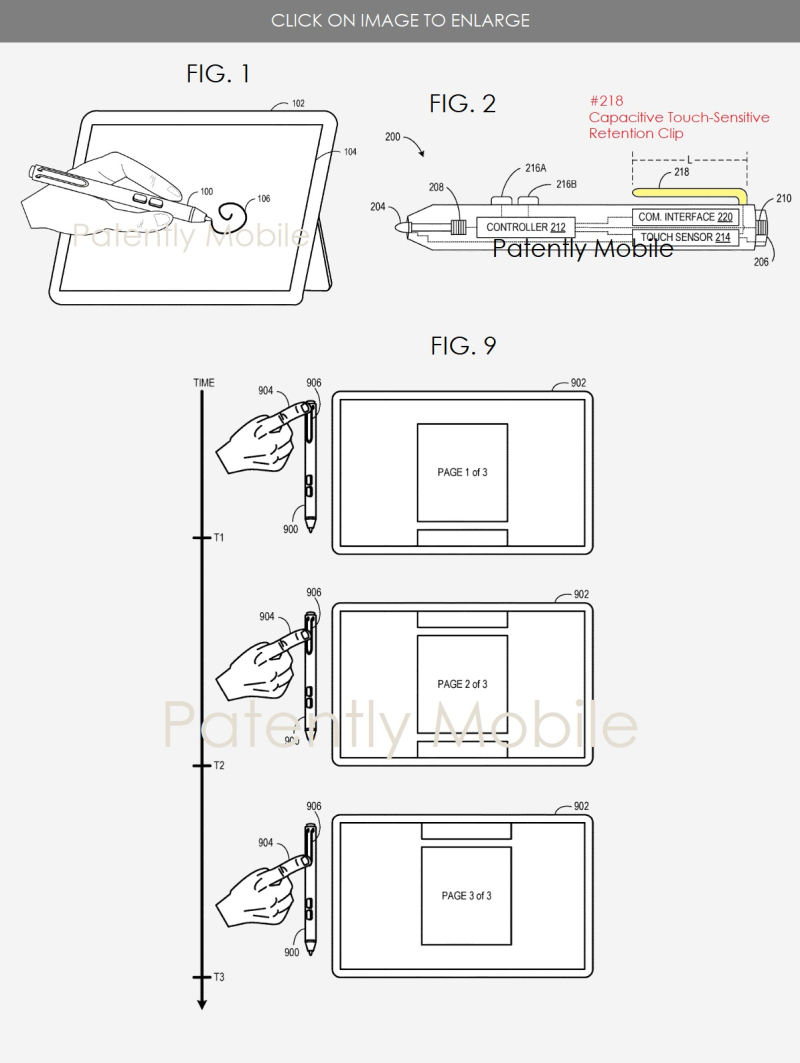 More specifically, the controller #212 (shown in FIG. 2) may be configured to detect a position or movement of a finger along the length of the touch-sensitive retention clip #218 based on an electrical signal measured by the touch sensor #214 that is sent to a computing device, via the communication interface #220.

In patent FIG. 9 we're able to see a scrolling operation using the pen's clip and in another (not shown), a user could use the same action in a zooming mode by first touching one of the buttons that acknowledges a particular function or mode.

Microsoft filed for this patent in August 2016 and today it was granted by the U.S. Patent Office.

If you use a Surface tablet, or competing tablet such as an iPad Pro, do you think a smart clip hardware feature could be of value to you? Send in your feedback below.