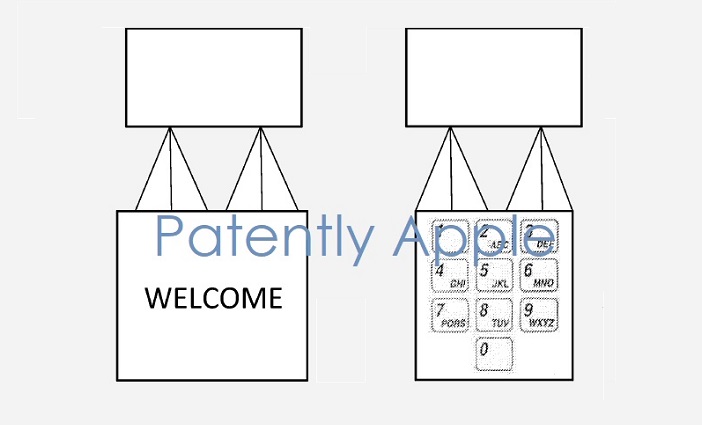 Patently Apple discovered a new patent application from Apple today in Europe. The invention relates to an autonomous or smart vehicle system that will allow a driver to call up various interfaces on a heads-up display. The system also covers an advanced camera ID system that will recognize a driver and then project a keypad on the driver side window so that they could enter their pin number. One of the techniques of the system uses a projector or laser painter. This is the second smart vehicle / autonomous patent that we've covered in the last two months. The first was covered in our late December report titled "The First Apple Patent Regarding Autonomous Vehicle Navigation was published today by the U.S. Patent Office."

Many vehicles, especially current automobile designs, include some welcoming scenarios to approaching passengers. For example, many vehicles execute a sequence of blinking lights (such as through one or more hazard lights or headlights of the vehicle) when the vehicle receives a signal from an associated key fob. Other vehicles may unlock the doors of the vehicle and/or turn on the interior lights of the vehicle when the signal is received. However, such displays are often passive displays preprogrammed to execute when the signal of the approaching passenger is received. Further, such displays are often limited to just a few display options utilizing the existing lighting systems used by the vehicle during operation. It is with these and other issues in mind that various aspects of the present disclosure were developed.

One implementation of Apple's invention may take the form of a system for projecting an image onto a surface near a vehicle. The system may include a presence detector that detects the presence of a user within a distance threshold of a projection system integrated with a vehicle, the presence detector comprising a proximity sensor and a recognition system to determine an identity of the detected user, a projection controller in communication with the presence detector to receive the determined identity of the detected user, and an image projector in communication with the projection controller, wherein the projection controller transmits one or more instructions to the image projector to display an interactive image onto the surface within a vicinity of the vehicle based at least on the identity of the detected user.

Another implementation of Apple's invention may take the form of a method for projecting an image from a projection system. The method may include the operations of detecting the presence of a user within a distance threshold of a projection system integrated with a vehicle through one or more proximity sensors, obtaining user information comprising a user identification associated with the projection system, and projecting an initial interactive scene onto a surf ace within a vicinity of the vehicle based at least on the user information.

Apple's patent FIG. 1 presented below is a diagram of a system for a vehicle to project an interactive scene onto a surface for interaction with a user of the projection system. 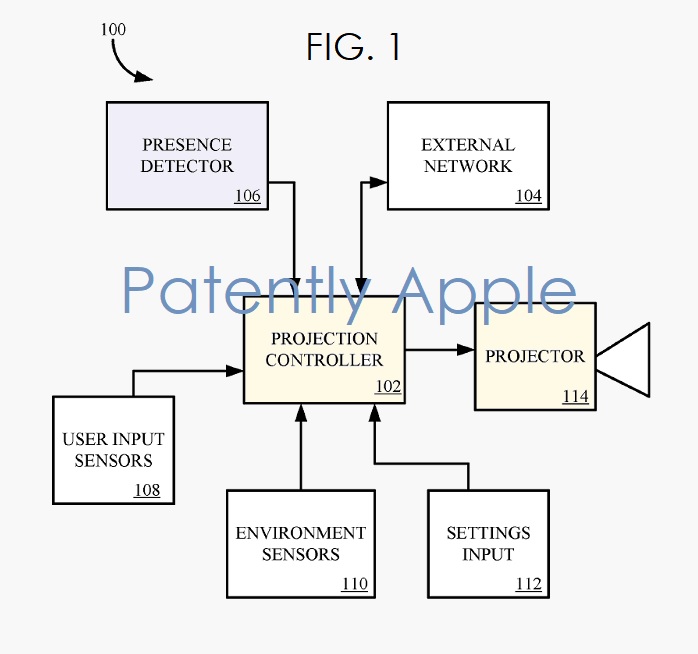 More specifically, the projection system #100 could act as a display for a computer, with one or more gesture sensors as inputs to control the computer. For example, the projected scene may be an interface to a vehicle, the Internet, a closed network or computers, other connected hardware, etc. that is controlled by the gestures of the user and displayed through the projected scene.

In a way, what Apple is describing could represent a heads-up display on a windshield for the driver and yet act as a chessboard on a passenger window.

Apple goes on to point to a projection controller #102 that may communicate with a projector #114 or other type of image creator. The projector may be any device which projects an image onto a surface. In general, the image may be projected on any surface by the projector, including vertical surfaces, horizontal surface, angled surfaces, rounded surfaces, and the like.

For example, a bright image projector, such as a laser painter, may be utilized by the system #100. In general, the illumination of the image may be bright enough to produce a significant contrast compared to the surrounding medium, through the use of high intensity, and/or colored lights.

These illumination sources include visible light laser sources which can rapidly paint shapes faster than they eye can process, or high illuminance projectors which can focus an image at various distances.

In one particular implementation, a direct scan laser device or devices may form an image by reflecting laser beams off of a fast tip-tilt Micro-Electro-Mechanical System (MEMS) mirror which can scan through the angular area of an image faster than a human can perceive the motion.

The system can use an external network (#104) to access the internet and have headline news be projected onto a surface be it the windshield or back of a car seat where the driver or passengers can obtain information about maps, routes and annoying ads from nearby stores. Let's hope the latter feature is optional.

Apple later notes that the driver will be able to call on Siri change the windshield interface with information that they need or want at any given moment.

Apple's patent Figure 2 below is a flowchart of a method for a vehicle to project an interactive scene onto a surface for interaction with a user of the projection system. 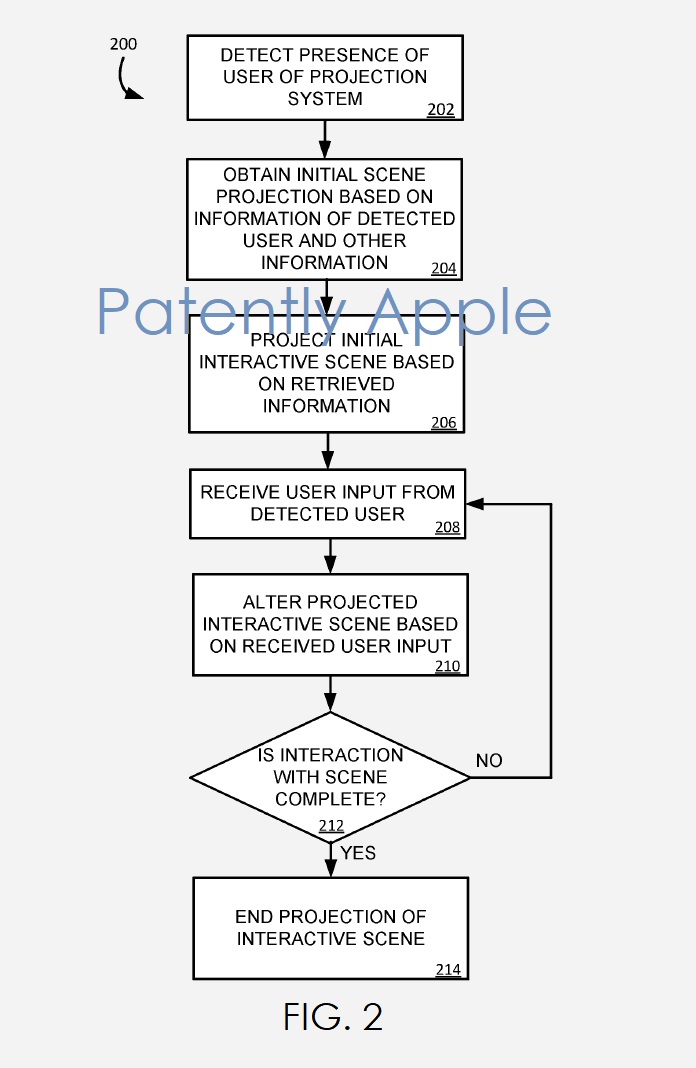 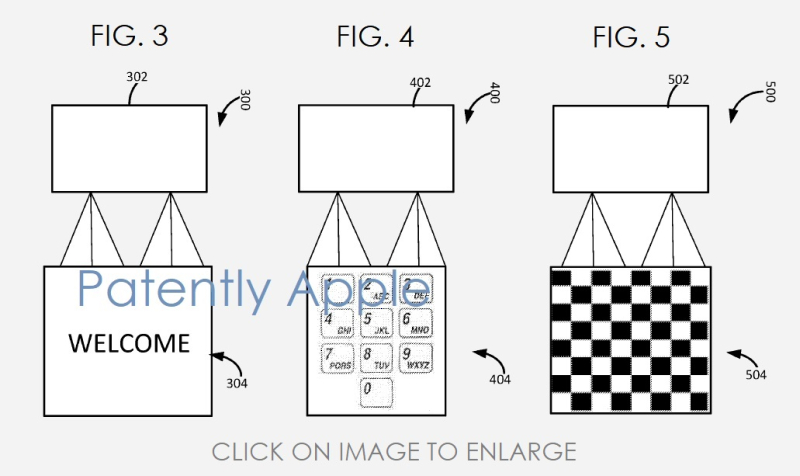 Apple further notes that based on one or more user inputs (such as user gestures received at the system), the projected scene may be altered or new scenes may be projected.

In addition, control over some aspects of the vehicle (such as unlocking of doors, starting of the motor, etc.) may be controlled through the interactive scene and the detected gestures of the users. Thus, through the projection of the interactive scene and the detection of a user's engagement with the scene, a user experience with a vehicle or other projection system may be provided.

Elaborating on patent FIG. 3 noted above, Apple notes that messages may include any image and/or may be projected onto any surface. In addition to the welcome interactive scene #304, other welcoming scenarios are also contemplated.

For example, one initial interactive scene may include a red carpet image. The red carpet image may unfurl or otherwise be animated as the identified user approaches the vehicle. In addition, as the identified user interacts with the scene 304, the interactive scene may be altered. For example, as the person walks on the projected carpet surface, the projected image may interact with the person or sound effects may be emitted from the vehicle.

Such interactions may include sparks or other dynamic animations at or near the user's feet during a step or sound effects of cheering people or flashing lights may be activated.

In Apple's FIG. 9 below, the projection controller is integrated with or otherwise associated with an autonomous vehicle or other type of vehicle to interact with a user of the vehicle. 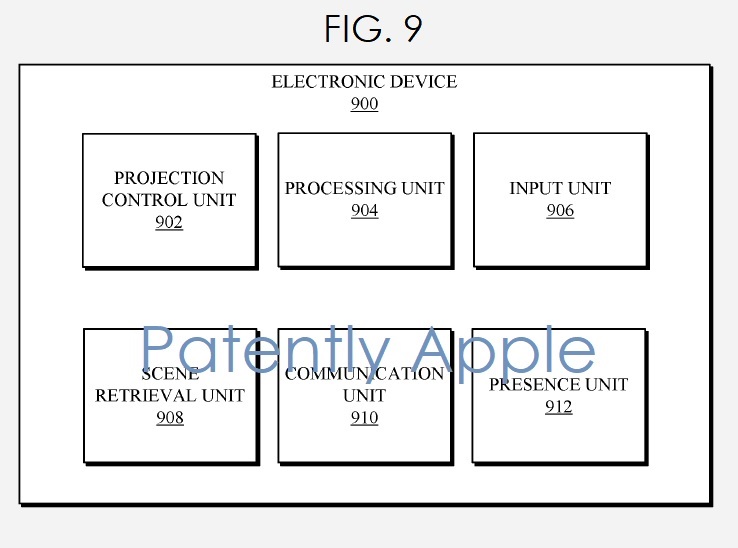 In this manner, the vehicle may automatically lock the doors by detecting the location of a user in relation to the projected interactive scene with no other indication or action of the user.

In addition, a particular gesture or command provided by the driver or passenger may initiate an emergency activation or any other security feature. The emergency sequence may include one or more flashing lights on the vehicle or in a projected image, one or more emitted sounds or alarms, and/or the activation of a video recorder to capture images surrounding the vehicle.

Apple's patent application was filed back in August 2017 and published by the World Intellectual Property Organization (WIPO) February 22, 2018. Considering that this is a patent application, the timing of such a product to market is unknown at this time.