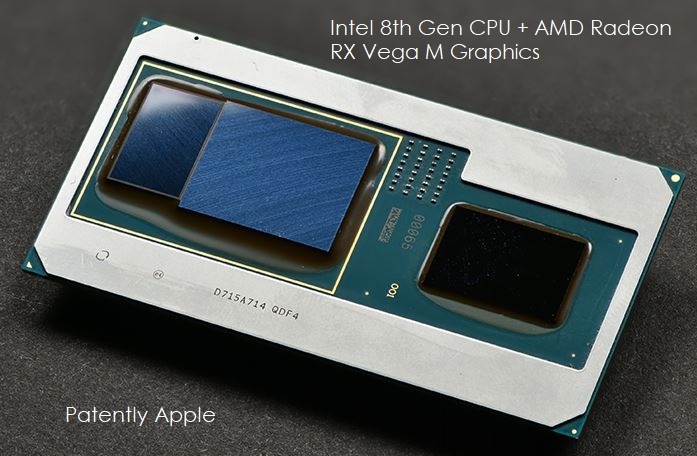 In November, Patently Apple posted a report titled "Intel Surprises the Market with a combined Intel-AMD Processor GPU Package for 2018 Smaller Form Factor Devices." More specifically, we noted that Intel and AMD had co-designed an Intel Core microprocessor with a custom AMD Radeon graphics core inside the processor package, aimed at bringing top-tier gaming to thin-and-light notebook PCs. Today Intel released it ahead of their keynote at CES.

Intel launched a first-of-its kind processor: the 8th Gen Intel Core processor with Radeon RX Vega M Graphics. Packed with features and performance crafted for gamers, content creators and fans of virtual and mixed reality, it expands Intel's portfolio thanks to its optimization for small form factors like 2 in 1s, thin and light notebooks, and mini PCs.

The new 8th Gen Intel Core processor with Radeon RX Vega M graphics delivers a top-of-the-line experience to gamers and VR enthusiasts. This includes up to three times the frames per second on thinner, lighter and smaller devices compared with similar systems from three years ago and up to 40 percent compared with current discrete graphics. Now, gamers can play the latest titles like 'Vermintide 2' in high resolution on the go or in their living room with smooth motion and vivid colors, all as part of a truly immersive gaming experience.

Content creators can also do more with this new processor, whether it's creating 3D images from scratch, editing videos seamlessly at home or on the go, or using the most popular creative applications. Compared with a 3-year-old PC with discrete graphics, content creation with Adobe Premier Pro* is 42 percent faster. Imagine the combined flexibility and performance enabled with this new processor for content creators in the growing 2 in 1 form factors for PCs.

With the performance and graphics capability to run everything from Windows Mixed Reality headsets to Oculus*, consumers have the options of which reality fits them best – whether they want to watch live sports and movies, explore famous landmarks or play VR games – all on a PC that is sleek, thin and smaller than they expect.

While the first systems to run with this include HP and Dell, you have to wonder if Apple's next-gen slim MacBook will take advantage of this new combined CPU and Graphics board later this year.