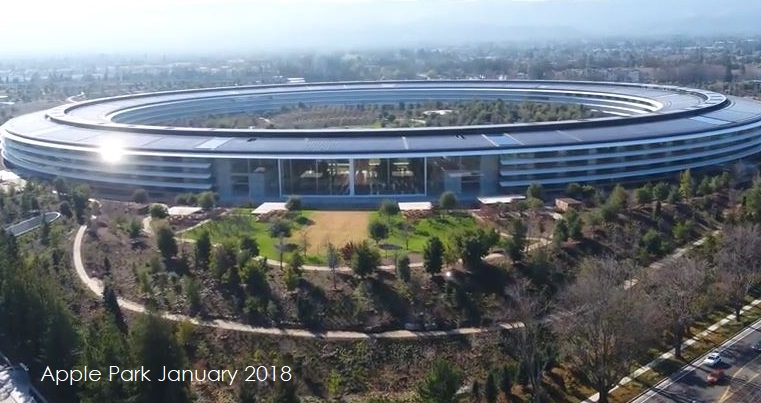 Patently Apple posted two reports (one & two) back in November covering Apple's new Visitor Center opening. Over the years we covered a few drone videos of the construction of Apple Park, such as this one shot at sunset back in May. We didn't fanatically cover drone videos of the construction like many other news sites over the years as we thought it to be complete overkill. However, there is a new drone video out today that shows us something new. While showing us the progress of Apple Park's landscaping, we get to see the first shots of a massive new water fountain. It'll be a really great space for employees to escape to whether at lunch or in the evening during a break. Here's to hoping that a future drone video will show us the fountain functioning day or night.

Another thing that is clear, from the latest video is that the landscaping is far from over in areas outside of the main headquarters building, like in areas around the Steve Jobs Theater. The next video we'll eventually cover is when Apple Park has been fully completed.

When you look back at the summer 2014 drone video, it's amazing to see the beginning of a massive project compared to today's status. Three and half years after one of the first videos of construction surfaced, the work still continues.