Déjà Vu? Another Sapphire Project goes wrong and a Chinese Company Sues Apple for Breach of Contract in California

Back in late 2014 Patently Apple posted a report titled "Bankruptcy Court Approves Settlement between GTAT & Apple." We noted in the report that GT Advanced Technologies Inc. had won bankruptcy court approval of a settlement with Apple Inc. that wards off the threat of litigation over a failed effort to produce large quantities of scratch- and shatter-resistant sapphire smartphone screen materials. It was a nasty divorce and Apple Legal fought hard to keep information about the details of their project(s) from being leaked to the press. While that dark chapter of making custom sapphire for Apple was thought to be over, another company in China has now stepped up to sue Apple over a breach of contract relating to the making of sapphire glass.

China's Hebei Hengbo New Materials Technology Co. has filed a lawsuit against Apple in San Jose, California. Hengbo manufactures, among other things, high purity alumina melt stock. That stock, in turn, is used to make sapphire glass, a scratch resistant and durable form of glass used in consumer electronics, among other things.

The legal definition for Rescission is "The undoing or termination of a contract that may have been entered into as a result of misrepresentation, fraud, or undue influence."

The heavily redacted lawsuit carries a mystery component to it. The company notes that they reserve the right to amend their lawsuit when the true identities of 10 individuals associated with Apple are made known.

Specifically, the formal complaint reads: "Hengbo will seek leave to amend this Complaint when the true names and capacities of the Doe defendants have been ascertained. Defendant Apple and these "Doe" defendants are hereinafter collectively referred to as 'Apple.'"

The complaint further notes that "The true names and capacities of the defendants named herein as Does 1 through 10, whether individual, corporate, associate or otherwise, are unknown to Hengbo, which therefore sues those defendants by such fictitious names. Hengbo is informed and believes, and thereon alleges, that each of the defendants designated as a "Doe" defendant is legally responsible for the events hereinafter alleged and legally caused injury and damages proximately thereby to Hengbo as herein alleged. "

The vast majority of the lawsuit is redacted as the example page below illustrating exactly what we see for the "Factual Background" of the case. 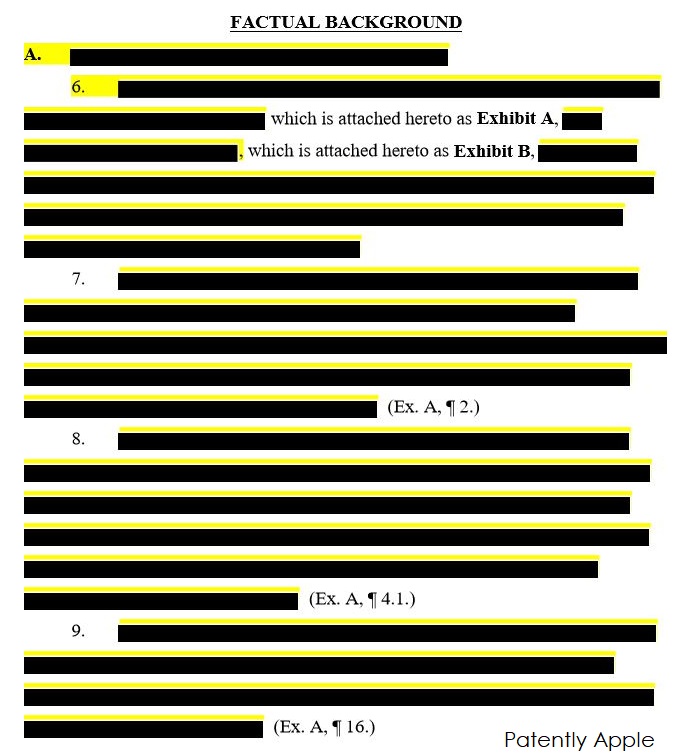 On paper the Chinese case sounds eerily like the GT Advanced case where GT Advanced believed that they were going into partnership with Apple. GT Advanced described it as a classic bait-and-switch scenario in a court document.

With the Chinese Company suing Apple primarily on the first count of "Enforcement of Rescission of Contract," we can see where this case is going and what they're accusing Apple of because it's Déjà vu with the GTAT situation.