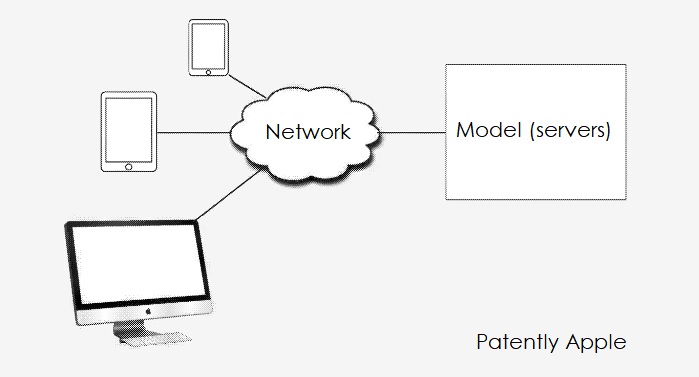 Today the US Patent & Trademark Office published a patent application from Apple that relates to machine learning. More specifically, Apple's invention covers systems and methods for a server generating a plurality of proxy prediction models for each of a plurality of applications for use by client devices.

In an overview of machine learning, Apple notes that conventional machine learning relies on gathering large data sets and training prediction models from a large sample of users. The prediction model is trained to achieve the highest possible prediction accuracy on the training dataset, but will often need to be personalized for individual users by taking into account a particular user's personal data.

This is focus that Apple places in their patent claims with machine learning used in conjunction with a sensor. Moe specifically Claim #4 states: "wherein the one or more sensors comprise a health sensor that includes a heart-rate monitor."

Apple further notes that "A speech recognition subsystem may need to be tailored to a particular user's speech patterns or inflections." This is also a focus in Apple's patent claims.

Apple further noted that "a music suggestion subsystem is preferably tailored to the particular user's tastes, preferences, and listening patterns." This is likely used in Apple Music and likely to be used with Apple's HomePod.

Apple goes on to explain that in prior art, machine learning that is used to enhance a particular user's experience can be trained on the client device using the particular user's data only. Training using only on-device data preserves privacy at the cost of training accuracy and time. A machine learning algorithm typically needs to collect a substantial amount of data before machine learning can generate reasonably accurate prediction models. In some cases, such as health sensors that measure one or more attributes of a user's physical body, the sensor may need to be calibrated to that person before the data collected can be used by a machine learning algorithm to generate predictors on the client device for that user. Calibration of a sensor to a particular human can be intrusive, very personal, and time consuming and thus an undesirable step that a user may not wish to take.

Another way to generate a machine learning prediction model that can be used to enhance a user's on-device experience can include a server system collecting a substantial amount of crowd-sourced data that can be used to generate one or more prediction models. This method of training predictors collects a user's personal data and may violate privacy, even if the information collected is de-identified. If privacy is maintained, then another problem with training predictors using crowd-sourced data is that a server does not know which prediction model, among a plurality of predictive models for, e.g. music preferences, a particular client should use. Maintaining privacy means ensuring that the server cannot identify a particular client with any specificity. If the server cannot identify a particular client with specificity, e.g. due to privacy constraints, then the server cannot provide a personalized prediction model to the client device to enhance the user's on-device experience.

The invention will be used on Apple's full range of devices from the Mac to iDevices including Apple TV and "entertainment systems" that could be referring to Apple's future entertainment content service.

Apple's patent FIG. 2 below illustrates, in block form, a detailed view of a system for learning proxy models used by clients while preserving client privacy. 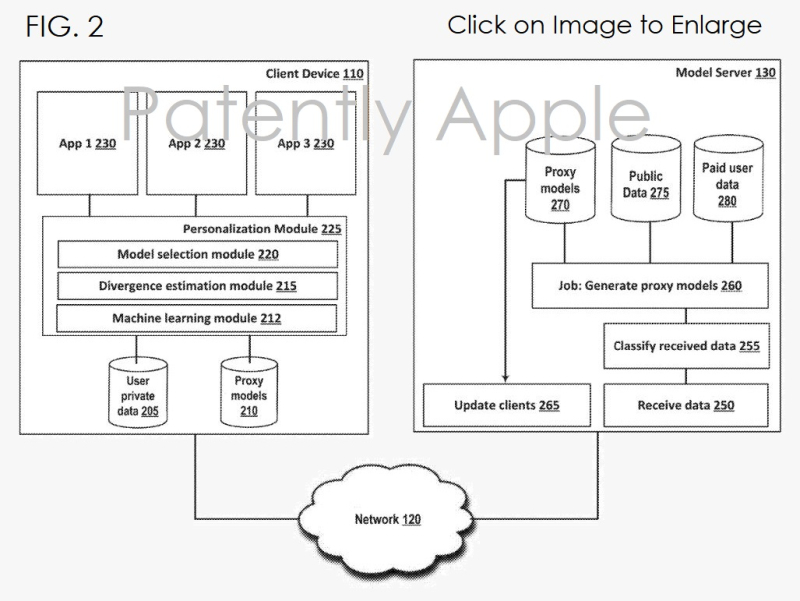 Our cover graphic covers patent FIG. 1 which illustrates, in block form, an overview of a system for learning a proxy models used by clients while preserving client privacy.

Apple's patent application was filed back in Q3 2016. Apple's inventors include Jared Zerbe, Apple's Silicon Systems Architect and two others that have since moved on to create a company called Kraenion which is an applied machine learning company developing a visual cortex (a "brain in a box") for machines that interact with the physical world.