Home Archives Contact Us Subscribe Twitter MeWe Facebook Patently Mobile
Apple Store in Seoul puts up Sign, 'Nice to Meet You,' hinting the Store is on a Count Down to Opening Day
Intel gets hit with a String of Class Action Lawsuits over Meltdown and Spectre Security Flaws found in their Processors

Some Apple fans, like the good folks at iMore, would love to see AMD used in future Macs and yesterday AMD laid out their x86 roadmap and it was rather surprising. As noted in our cover graphic, AMD will be introducing 12nm CPUs in Q2 and skipping 10nm and leaping to 7nm for 2019. For those interested in more details about AMD's announcements, you check out reports by AnandTech and PCWorld. Below is AMD's roadmap for Zen desktop processors. 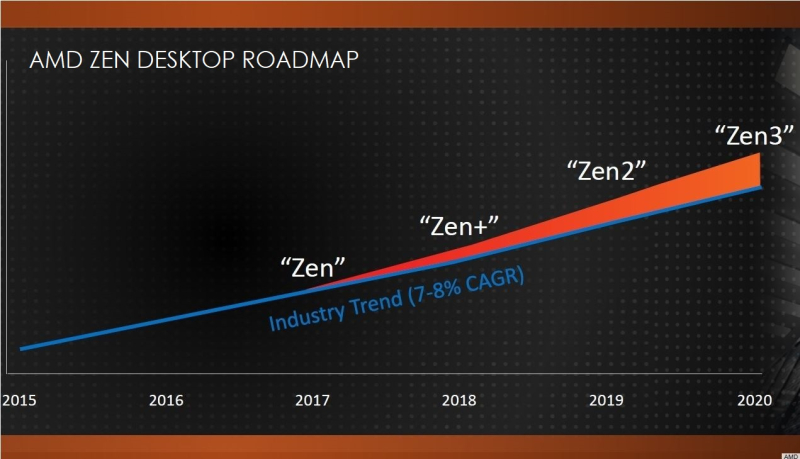 AMD said that a new iteration of its hit Ryzen CPU, called Zen+, would come in April, using a new 12nm process instead of the current 14nm process. The company didn't explain the nomenclature, but it did say the CPUs would clock up higher than current Zen-based chips. The new chips will feature the newer Precision Boost 2 frequency control, and an improved XFR2 clock speed booster. The new chips will also include an improved cache, and memory speed and latency improvements too. All told, officials told PCWorld unofficially to expect at least a 10-percent performance increase.

While Apple has chosen Intel's Xeon process for the iMac Pro using Radeon graphics, could Apple's all-new modular desktops make the shift to AMD processors to kick start a new generation of desktops? I'm sure that iMore and a lot more of Apple fans would applaud such a shift – but it's a long-shot at best.

Would you like to see Apple use AMD processors in the future knowing that a leap to 7nm is on the way for 2019? If so send in your comments below.